Looking for an unbiased DMM System review? Then you've come to the right website.

Apart from who created it and what it is about, we're also going to discuss whether this is a scam or completely legit. Plus, we're going to discuss other options so you can earn money online.

Summary: DMM System markets itself as an affiliate marketing and training program. When you join the DMM System, you will become its affiliate and you will receive payment when you successfully promote its products.

But various red flags mar its reputation. So, what are those red flags? You'll read about them in this DMM System review.

What Is The DMM System?

(Note that the DMM System is not the same company as or affiliated with DMM Systems, a concert production company based in Sioux Falls, South Dakota.)

DMM System markets itself as an affiliate marketing and training program. When you join the DMM System, you will become its affiliate and you will receive payment when you successfully promote its products. But that's just a short explanation of it, so let's delve deeper into DMM System's website to understand what it is really about.

When you land on DMM System's website, you'll immediately get a feeling of deja vu. These types of websites are all the same. It's a simple single-page website with the obligatory promotional video. What sets it apart is the presence of several testimonials at the bottom of the page. Maybe you've seen these people before, maybe you haven't.

According to the creator of the DMM System, 576 ordinary people have already earned more than $33 million through the system. People who have visited the website can get a slice of the pie even right after they finish watching the video. But you need to hurry because the creator of the website said because there are only a few slots left. In my area, there were only 8 spots left. But I guess the number of available slots are all the same in all areas.

Now, on to the video. If you're always looking for things to do online in hopes that it will make you some money, then perhaps you're already familiar with these kinds of videos. At the beginning of the presentation, the narrator informs you that you are the 67th out of 70 persons who are eligible to receive access to the DMM System.

This system, the narrator claims, can generate more than $2,000 every day. This is followed by testimonials from people who allegedly earned fantastic sums of money using this very private and lucrative system. Then there are more promises and guarantees that you will make vast sums of money with this system.

But that's just the introduction. The presentation itself starts with a display of the trappings of wealth to tempt the viewer. These include a million-dollar house, piles of cash, a yacht, and a sports car. According to the narrator, getting these objects is possible simply by following 21 steps created by DMM System. Plus, you can master these steps just by spending 30 minutes every day.

But there's a catch. Only three people will be accepted by our unnamed narrator. If you're accepted, you will receive $2,739 in your bank account immediately. But wait a minute. You'll be confused the moment the narrator introduces the system. Instead of the DMM System, the name he mentions is My Online Profits Breakthrough System. Strange.

This is followed by a testimonial from Joe Flickenger from Missouri, who claims that he earned a whopping $36,000 using the system. He then presents photos of a sports car, a yacht, and a diamond ring. These were the result of him using the DMM System. The problem is it's unbelievable. If Joe is so rich, then why does his background in the video scream middle class?

After a long introduction, the narrator finally tells us how it works. Or not. According to the creator of the website, affiliates will work closely with a million-dollar company that can pay thousands of commissions. All affiliates need to do to get the commission is to send traffic to the website. To make sure that you're successful in this quest, you will be provided a training program.

After all that talk, the creator finally introduces himself. He's Matthew Dixon, originally from New Castle, Pennsylvania, but has since moved to San Diego, California. And here comes obligatory storytime.

Some creators of "systems" such as these always have that rags-to-riches story. Stories crafted to draw maximum emotional impact. Some of these men and women worked minimum jobs or had good jobs but were laid off. Matthew Dixon also has a variation of the same story.

He used to work as a taxi driver, and his personal life didn't go well. The worst part is his identity was stolen, adding to his financial and emotional stress. An accident which totaled his car added to his endless stream of problems.

It would have been easy to feel sympathy for him if he didn't brag about his properties. The viewer is presented pictures of luxurious houses and vehicles which you can easily discern have been cribbed somewhere on the internet.

So, why do Matthew Dixon and all other creators of such schemes do this? All of them say that they are motivated with a desire to help people and get a profit in return. This is also true in Dixon's case. For every product or service purchased through your website, Dixon will earn a 5%.commission. According to him, all you need is just drive 50 visitors each day to the website.

Apart from the training program, you will also get a mentor who can talk on the phone with you whenever you have questions and keep you on track. Members will also have access to Dixon's personal sales team who will work their behalf to close sales.

Who Created The DMM System?

​
DMM System or My Online Profits Breakthrough was created by a man named Matthew Dixon. As is the norm, no one knows if this is the creator's real name or another fake name. But in cases like these, there's a high chance that this is just a fake name.

How Much to Join The DMM System?

​
The creator of the DMM System claims that this training and affiliate marketing program costs $1,000. But he had decided to slash it to $97. In my opinion, that is too expensive.

DMM System or My Online Profits Breakthrough system has a 30-day money-back guarantee. Not a lot of similar programs offer that. The problem is that 30 days is a short period to know whether a system works or not. Plus, there's no assurance you're ever going to reach customer service to request a refund.

It has Terms and Conditions published on the web page

Unlike other similar products, the DMM System actually has a Terms and Conditions page on its web site. The downside is it's disappointingly short.

​
The use of artificial scarcity

This strategy is just too common among these programs, and the DMM System is no different. It says that there is only X number of spots in the city where you live in, so you better hurry and sign up with this once-in-a-lifetime opportunity before time runs out.

But don't be fooled by this tactic because it's not true. The video and the website has been up for some time now, but it seems that Mr. Dixon still hasn't formed his team of 70 affiliates. When I first checked out the website, the system said that only 8 spots were remaining. I visited the website again sometime later and the number's still the same.

The creator of DMM System claims that you can earn thousands of dollars within a week or a month. It promises that you'll have your dream house, your dream car, and your dream vacation after you sign up. You can finally buy your wife a diamond ring.

Or so you thought.

But the sad truth is the income claims are inflated just to make it sound so good you'd whip your credit card in an instant. The pictures of sports cars, mansions, and yachts were taken from stock photography websites just to give you an illusion of wealth. 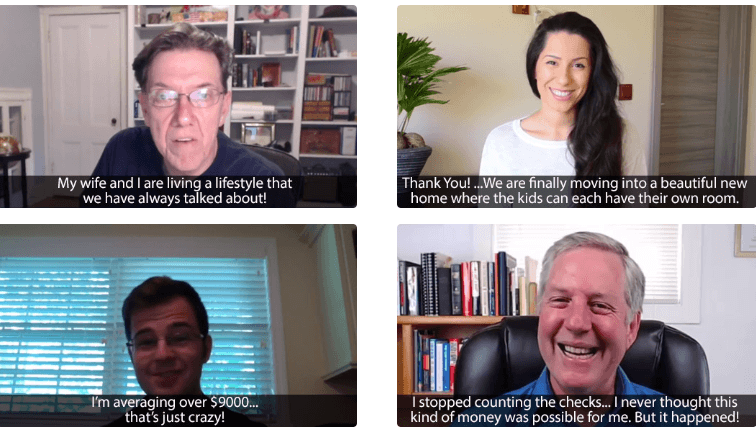 Every testimonial about how great DMM System is is fake. We've reviewed so many similar programs here that we can easily recognize some of the Fiverr actors who appear in the videos or the websites. Don't fall for it.

Promises that you don't have to do any work

If someone promises you that you're going to earn thousands of dollars without working hard, then there's a high chance that it is a scam. There's simply no way you can get all that money and you're dream house without hard work.

The DMM System or My Online Profits Breakthrough system costs $97. That's just too expensive, and you're not even sure it's going to succeed.

Is The DMM System A Scam?

​
DMM System is also known as My Online Profit Breakthrough system. It was created by Matthew Dixon who is now based in San Diego, California. Whether that's his real name or not, no one really knows and it can't be verified because he doesn't show us his face.

DMM System sells itself as an affiliate marketing and training program. It costs $97, which is unreasonably steep considering the people Dixon appeals to are in dire financial straits.

There too many red flags you should not ignore if you're considering joining DMM System. Apart from being too expensive, it has overly inflated income claims, fake testimonials, and unverifiable identity and income claims. So, is it worth your time and money? Sadly, no.