Free Ad Cash System Review: When It’s Too Good To Be True…

Welcome to another review, and today we're going to talk about another opportunity called Free Ad Cash System.

We're going to discuss what this so-called system offers, how you can allegedly make money from it, and some serious red flags you need to consider before you bring out your credit card.

Summary: Free Ad Cash System is an online business opportunity created by a man named Simon Green. There is a high chance that this is a fake name because Mr. Green cannot be found in the promotional video nor does he offer any proof about his identity.Free Ad Cash System lures unsuspecting and cash-strapped people with the promise of unlimited albeit unrealistic income. Learn more about why it's prudent for you to stay away from this "opportunity."

What Is Free Ad Cash System and How Does it Work?

Some creators of get-rich-quick schemes want their members to sell nutritional supplements, while others want their members to beauty products. Free Cash Ad System is different. Yes, it's another members-only get-rich-quick scheme. But instead of selling beauty products or nutritional supplements, you'll be buying and selling ads.

So, what is Free Cash Ad System about? The premise is so simple. Invest in high-converting ads featuring high-end brands and earn additional cash when a website visitor clicks on them.

You can also sell the ads when their value increases. It's like the stock exchange, except for ads. Some of the websites that hawk the same money-making scheme include Clicks Dealer, Banner Bit, Gemini Software System, and of course, Free Ad Cash System.

Ad flipping schemes have similar websites. The website is usually a squeeze page with not a lot of information about the so-called opportunity. But one thing in common with these schemes is their long-winded and highly dramatic sales video.

Free Ad Cash System's promotional/teaser video is no different. It starts with the usual rags-to-riches story that is written in a way that will sway the audience's emotions especially if they are going through some money problems as well.

In this case, we meet a man named "Simon Green" (whether that is his real name or not no one knows for sure). "Simon's" voice is so smooth and modulated we're inclined to believe that this is a voice actor speaking (as is usual with videos of get-rich-quick schemes).

According to the narrator, Simon was once a successful employee, but everything changed when he was laid off from his job. He became ill on top of that, and everything went downhill from there. He couldn't pay his bills and he was constantly behind his mortgage payments.

Everything changed when he talked to his brother-in-law named "Mike." Mike told him that he could make money simply by flipping ads. In short, Simon was convinced and began his journey into the lucrative world of ad flipping. In honor of his new-found venture, he even christened himself "the Flipper."

​
The man narrating his life story in the video is named Simon Green. But the thing is no one knows if that is his real name or just a fictitious one. My hunch is this name is just a pseudonym as people like "Simon" thrive on anonymity. Being anonymous means little to no accountability, and it's easy to leave people when things collapse.

How Much Does it Cost?

​
According to the narrator, Free Ad Cash System is free. BUT you need to invest a minimum deposit of $250 to purchase high-converting ads from high-end brands. Examples of these brands include Prada, Hermes, Lacoste, Burberry, Fendi, and more. The more you invest, "Simon" claims, the better your chances of earning more. 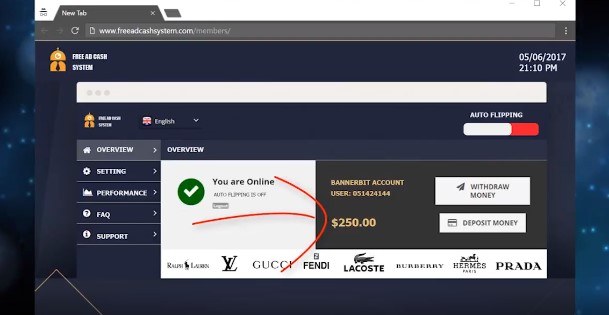 ​
Free Ad Cash System doesn't have a compensation plan. All it has are promises that you will earn X amount within a day, a week, or a month.

When you visit its website, you'll be bombarded with various income claims. The most prominent income claim is located beside its video. It claims that it is possible to make as much as $3,671.32 (wow, so specific) each day just by using the Free Ad Cash System.

Take a look at the upper right corner of the page and you'll see a constant stream of people who have allegedly signed up to use the Free Ad Cash System. The amount they have made with Free Ad Cash System is included with names and pictures. The names are likely fictitious, while the pictures look like stock photos or stolen profile pictures of some unsuspecting social media users.

The video also contains a myriad of income claims by Free Ad Cash System "users." One user claims that he had earned $3,902.80 within 48 hours. Another user says that "the checks just keep piling up." The narrator himself says that you can earn thousands of dollars within just a few days. You could even become a millionaire after just a few months!

But is it too good to be true? Of course, it is.

That might seem like a bad thing at first, but that's a good thing actually. If you live in another region of the world and you're barred from signing up as a Free Ad Cash System, then you've just been saved from a scam.

What I Don't Like About Free Ad Cash System

Here are some of the Free Ad Cash System red flags and why you should stay away from it.

Websites such as Free Ad Cash System always start with phrases such as "how would you like (insert X amount of money here)?" The incomes claims are always overly inflated to ensure that cash-strapped and desperate people will believe them. It would be easy for trained and discerning people to laugh these conmens' claims off. But it is not so easy if one is stressed because of mounting bills and desperate enough to believe any solution.

The identity of the person behind Free Ad Cash System

Free Ad Cash System is said to be the brainchild of a man named Simon Green. But we don't see Mr. Green in the video, and neither does he present a proof of his identity. The problem with not knowing who Mr. "Green" really is is that no one's accountable when problems arise. What if the anonymous person behind Free Ad Cash System runs off with your money? Are you going to tell the authorities that a "Simon Green" ran off with your money even though you can't describe him and you don't know his address?

Fake testimonials from paid actors are some of the hallmarks of these types of scams. These actors can be hired from websites such as Craigslist or Fiverr.It's expensiveAt $250, there's no doubt that this scam is an expensive mistake. My advice? Take your money and run as far away as possible.

Ad flipping doesn't work, and there are some additional red flags which indicate that it is not to be trusted.First is the creator's anonymity. "Simon Green" is most probably a fictitious name, and that alone will get you in big trouble. No one knows what he looks like or where you can find him. Yes, he has a compelling rags-to-riches story, but there's no way to verify his claims thanks to his anonymity.

The income claims he presented were too good to be true. If the income claims had been more modest, it might have been more believable.Lastly, Free Ad Cash System's use of actors is a serious red flag. When you watch the video, it's painfully obvious that they are just reading a script behind the camera because their eyes give them away. Plus, they did not present proof to back up their claims.Don't be fooled. Stay far away from Free Ad Cash System and other such scams.