Is Bemer Group A Scam? A Unique Pyramid Scheme?

Have you come across the Bemer Group and are wondering if it's a scam or not?

If so, this review is perfect for you!

Summary: The Bemer Group has very unique products for a MLM but at the end of the day it has many similarities to other MLM's (which isn't a good thing).

The worst similarity this company has is their low success rate - most people that join this company will lose money instead of making money. Because of this I don't recommend that you join.

Better opportunity: If you are looking for a legitimate way to make money online and from home, click the button below. There you will find the training that taught me how to make a full time income on the internet:

What Is Bemer Group?

The Bemer Group is a company that revolves around Bemer Therapy - Bemer stands for Bio Electro Magnetic Energy Regulation therapy.

This method is designed to improve your vascular system through a process known as microcirculation.

Bemer Group sells various Bemer products that cost in the thousands and they claim their products can help supply your body with more oxygen and nutrients as well as help with the disposal of metabolic waste.

There seems to be a lot of controversy over how helpful and medically valuable these kind of products are.

Bemer claims there's many studies that show their effectiveness like this one and this one.

Bemer also claims they have an exclusive deal with NASA but this seems to be very, very misleading. Apparently they filed for an agreement which pretty much any company can do.

Is Bemer Group A Pyramid Scheme?

This isn't a question you can really answer with a hard yes or hard no.

To understand what I mean, take a look at the picture below:

This is what part of the commission structure looks like at Bemer and it's the part that rewards recruiting.

Now, in an illegal pyramid scheme the only way you can make money is with recruitment and that's not the case here.

You can sell Bemer products directly to customers for a commission and without recruiting.

However, there's one more thing to note. In order to get access to the full compensation plan and to be able to make money from recruiting you have to buy a Bemer product (if you want to just sell directly to customers you don't have to buy a Bemer but you also can't recruit).

When the majority of a company's revenue comes from distributors that can also make it a pyramid scheme.

I have no clue what percentage of revenue does come from distributors but the fact they force newbies to buy their products is definitely a red flag.

Bemer group is a MLM and the MLM business model is one of the more flawed ones out there.

The reason for this is recruiting is very difficult and the products offered by these companies are usually very expensive and more of a luxury item.

These are issues you'll have if you decide to join Bemer.

Their products cost thousands of dollars so who you can sell to is really restricted and you have to spend thousands to be able to get paid for recruiting (you have to buy a multiple thousand dollar product for this).

It's going to be a really, really uphill battle to make your money back let alone make anything significant.

There's a reason many studies show 99% of people LOSE money with MLM's. Look at the graph below if you want to see other eye opening MLM stats:

How Much To Join Bemer?

The price of joining Bemer depends on what you want to do when you sign up.

If you want access to the full compensation plan and to be able to recruit you have to:

Keep in mind the cheapest product Bemer offers is over $4000! The main product they promote costs nearly $6000!

So if you want to recruit (which is the best way to make money with this company) you're going to have to pay thousands of dollars.

The second option is to pay the $290 fee and only get access to direct commissions without recruiting commissions.

If you make a qualifying sale you then become eligible for commissions. However, your first sale's commission goes to the person who recruited you.

MLM compensation plans are always complicated and this one from Bemer is no exception. It's full of technical jargon that'll be hard to understand if you're not familiar with MLM's.

If you want to watch a full video presentation on the compensation plan, you can watch the video below:

I don't think it's important to know every single detail of the plan and instead I'm going to summarize the most important parts.

Inside of the compensation plan you'll notice there are 7 different affiliate ranks you can achieve.

For instance you achieve the first two ranks when you sign up and you hit the third rank when you reach a certain amount of sales. As you move up the ladder you get higher commission rates and you earn more from your downline.

The picture below shows all the ranks and the bonuses you get for hitting certain ranks: 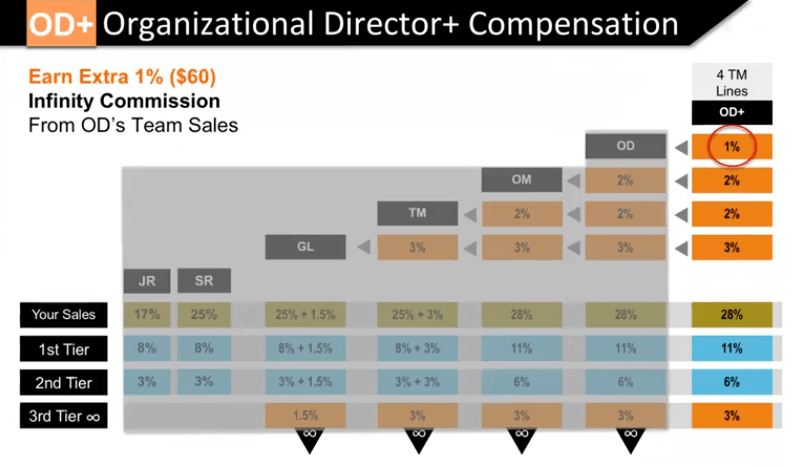 You can sell Bemer products and earn a commission that way. If you look at the picture in the last section you'll see you get a higher commission rate when you go up in rank.

This is the part of the commission structure that rewards your recruitment. The payout structure here is unilevel and looks like the following:

How much you earn and to what level you earn from depends on your affiliate rank.

I'm not going to go into whether Bemer's products work or the science behind them. I'm not a scientists or a doctor so I don't really have an opinion on that.

I'm an expert on the business side of things and want to look at the products from that point of view.

The first product is called the Bemer Pro Set and costs $5990 and comes with various products.

The second product is called the Bemer Classic Set and costs $4290. This set comes with less products in the set.

I think you're going to have a hard time selling these products because they're so expensive.

Again, I don't if they work the way the company claims they do but I guarantee there's cheaper ways to achieve the same results.

Convincing people to spend $5000+ on a product like this is going to be tough.

There's much more not to like here than to like and the main things that I dislike are:

Is Bemer A Scam?

However, this is certainly a bad business opportunity.

MLM's in general have very low success rates and most people just end up losing their money.

The majority of MLM's don't cost thousands to join like it does with Bemer, though. You won't be losing a couple hundred with this company - you'll be losing thousands!

I definitely think you should avoid this MLM.

Hopefully by now you've decided Bemer isn't right for you.