Is CB Wealth A Scam? Another Get-Rich-Quick Scheme

Welcome to another review, and this time, we're going to talk about CB Wealth.

Maybe you've seen it on your friend's Facebook page or your brother-in-law talked non-stop about it.

If you're curious but cautious, then read this CB Wealth review.

We're going to discuss about what it offers, is it the right opportunity for you, and whether it is a scam or not.

Summary: CB Wealth offers a done-for-you website which its creator promises is going to be lucrative. It's so profitable that you're going to earn thousands of dollars each month on autopilot. Its creator is an affiliate of Click Better.

But a couple of the things that stand out is CB Wealth's dearth of information on its website and the unverifiable stories its creators present in its promotional video. So, is CB Wealth a scam? You'll find out below.

What Is CB Wealth?

CB Wealth's website is pretty simple. You've even probably seen those types before if you're always looking for ways to earn more money. In fact, you've probably even heard the voiceover before. That familiar and well-modulated voice that provides narration for anything and everything, including infomercials, political ads, get-rich-quick schemes, and more.

(Before we continue, let me be clear that the CB Wealth we're going to talk about is not connected to CB Wealth Management Group based in Palm Desert, California. With that out of the way, let's continue.)

CB Wealth is an affiliate of Click Better. It is an affiliate marketing program that offers various Click Better products and a done-for-you website. Its website is very simple (as is the norm with these types of programs). It's just a single page with a video, but not much else.

According to its creator, he had discovered a "proven, automated system [that] made [him] $25,921.75 in under 30 days." That means that he earned more than $800 every day, and that's something even the most successful office worker can take credit for. But is it too good to be true? Yes, it certainly is.

Let's discuss the video to know what CB Wealth is about. At the start of the video, the narrator tells us that we must have been sent by one of the creator's closest friends. He then insists that we should not share this video with anyone else. 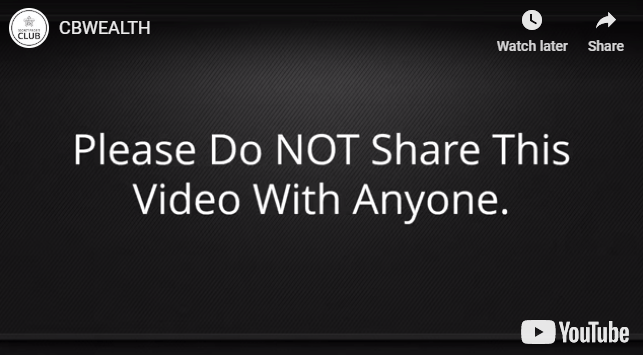 Why people shouldn't share the video with anyone he doesn't explain. But I suspect that this is just reverse psychology. Remember when we were kids? Someone -- may be our parents or a babysitter -- would tell us not do something and we would just do the reverse just for the fun or to spite them?

According to the narrator, CB Wealth is a "revolutionary done-for-you money making system." Whether this is true or not, we'll see. You can earn more than $25,000, and you don't even need any online experience to make that money, he claims.

He mentions people who have allegedly signed up with CB Wealth and had earned outrageous sums of money using the system. Whether these people are real or fictitious, no one knows. But in cases like these, I'm willing to bet that they're fake. He doesn't present a picture or an actual testimonial or anything a discerning person can use to verify his story, and he wants us to take his word at face value?

The narrator promises to show us how to earn this amount, but not before tempting his audience with Ferraris and mansion and trips to Dubai. By this time, your patience will begin to run thin. Just tell me what it is already!

He finally introduces himself during the 5-minute mark. His name is James Robertson, and he is the creator of CB Wealth. He claims that he is a writer, researcher, and online business expert. And now here comes the rags-to-riches story.

"James" used to work at a restaurant. He received a minimum wage, and naturally, he was broke and struggled to provide for his family. Maybe this part of the story is true. Maybe it's not. But it does resonate for people who are struggling with their finances too, and that's what makes them vulnerable to scams.

Unlike other similar systems, James didn't meet his rich brother-in-law or wasn't introduced to some Russian online marketer (as is usual with these stories). James read books and blogs to learn about how to make money online. He put what he learned into practice, and as expected, he's now earning a lot of money. The best part? Everything's on autopilot.

James then shared this system with other people. They, too, made a lot of money with it. According to him, there are now 157 members making money with the CB Wealth system. That was in February of 2019. No one knows if the number is the same now.

Then it's back to the sales pitch, emotional appeal, and empty promises. As usual, James also mentions that the opportunity will disappear soon so you need to take action soon.

According to the website, the creator is a man named James Robertson. Whether that's his real name or he's just using a fake name, no one knows. No one can verify his identity, too. All we know is that he is affiliated with Click Better and that's about it.

How Much to Join CB Wealth? 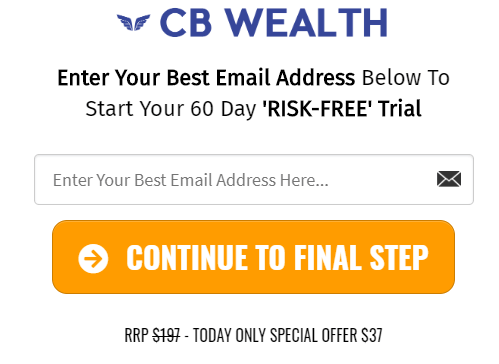 According to the narrator of the video presentation (it's more like a Powerpoint presentation with a voiceover), CB Wealth costs hundreds of dollars. But the creator slashed it to $37. Pretty cheap for something could potentially bring in thousands of dollars per month. But considering that he didn't tell us what the system is all about, then it's best to be wary.

The good news is CB Wealth is it offers a 60-day money-back guarantee. The downside is CB Wealth and its affiliate Click Better do not present prospective customers a contract or terms of service. Customers are taken directly to a checkout page, so they don't have the chance to peruse the fine print before they buy the product.

Even if CB Wealth has a 60-day money-back guarantee, it doesn't automatically mean that you will be eligible a refund. Plus, reaching CB Wealth's customer service can be difficult.

It is relatively cheap

At $37, CB Wealth is one of the most relatively cheap done-for-you systems and affiliate marketing programs in the market.

Use of artificial scarcity to lure people in

Manipulative use of psychology

Some of the most insidious tactics creators of these systems can use is manipulating buyers with psychology. In the first few minutes of the video, the narrator tells us not to share the opportunity with anyone else. Why? Because people can't resist not telling anyone about a potentially lucrative opportunity.

It is also the norm among creators of these products to inject an emotionally appealing story in their videos. Whether the stories are true or not, no one knows. But my advice is to be wary of anyone telling you such emotionally touching stories when there's money involved. When it comes to money, it's better to be cool-headed and logical, and not be swayed by any story on the internet.

No adequate information of what CB Wealth is about

CB Wealth's website is very simple and doesn't have a lot of information. It has a 15-minute video that doesn't sufficiently explain what the product is about. There's just the creator's back story, a mention of some people who purchased the program, how much they are receiving... But beyond that, there's nothing much you can glean from it.

In the video, James Robertson claims that the system he created has made him wealthy. He also mentions the name of other people who have used CB Wealth and have become wealthy themselves.

The problem is there's no way to verify the identities of the people he mentions or the claim that they had indeed made money with CB Wealth.

Is CB Wealth A Scam?

​
CB Wealth is another get-rich-quick scheme that is sadly prevalent today. It has multiple red flags which you can easily spot when you visit the website and watch the promotional video. The website is nearly empty, and it doesn't provide customers any information they need to make an informed decision. The creator did not even exert the effort to make his promotional video as informational as possible.

There are no terms of service on the website, so customers don't know what they're signing up for. Then there's the creator himself. No one knows if that's his real name or if it's just another fake name to conceal his true identity. He mentions some affiliates, but sadly, we can't verify if those people exist either.

The verdict? Do not purchase CB Wealth. It's just a waste of your money and time.