Is Clickworker a Scam? Legit Micro Jobs or Another Scam?

Times like these, it's always a good idea to have a side hustle and make more money. You can have a little something saved up to pay for your phone bill or treat your kids once in a while.

You've been searching high and low for new opportunities to earn money, but to no avail. That is until one of your friends sent you a Clickworker link through email.

You're interested in joining, but the first thing you want to know is: is Clickworker a scam?

That's what we're going to find out. In this Clickworker review, we're going to learn what it is all about, the type of tasks you can do so you can make money, and whether it is a scam or not.

Summary: Clickworker is an online and mobile platform where you can do microjobs and make money. Clickworkers are considered independent contractors. Joining is free, and the tasks are internationally available. Although the microjobs are easy to do and Clickworker seems like a great way to earn money on the side, the website itself is riddled with negative feedback. Learn whether this is a scam or not by checking out our review below.

What is Clickworker and How Does It Work?

​
Clickworker is a website that uses crowdsourcing to accomplish different tasks. Individuals who have joined Clickworker are considered independent contractors who are required to have their own equipment (particularly desktop computers and laptops) and internet connection. Payment is on a piece-rate basis.

Let's say that a third-party affiliate or a specific company has a large project but does not have time or manpower to accomplish this. The company can outsource this task to Clickworker which has millions of independent contractors on standby and are willing to accomplish the tasks.

Clickworkers are free to choose and do whichever task piques their interests. The independent contractor is compensated once the task is finished.

This opportunity is open to many people in different countries worldwide. But what if you're a digital nomad? Keep in mind that Clickworker reserves the right to withhold some projects from you if the country you're located in is different from the one you're living in. Each household is also limited to three accounts only.

Clickworker was founded and incorporated in 2005. Its first client projects arrived in 2007 and grew in the years that followed. It acquired bitworxx GmbH in 2014. The number of Clickworkers on the platform grew to 1,000,000 in 2017, while its app for Android was released in 2018. 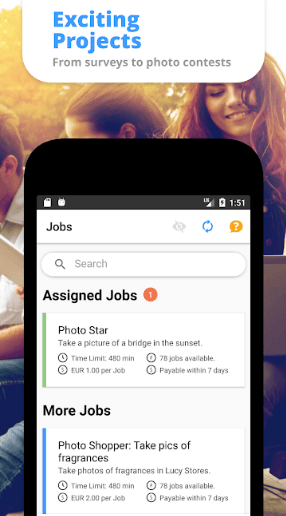 What Kind of Jobs Can You Do As a Clickworker?

​
So, what are the various tasks that you can do on this platform?

Several tasks are being offered by Clickworker. If you're great with words, then you can join Clickworker and write SEO texts, product descriptions, category text, and guides. Wordsmiths can also write glossaries, dictionaries, descriptions of hotels and destination, and company profiles. Some Clickworkers are also hired to write blogs and articles, as well as translate.

What's great about Clickworker is that it offers some unique tasks. These include competitor research, address enrichment and validation, lead research, and personnel recruitment.

You'll also discover distinct jobs when you join Clickworker. Clickworkers can conduct search relevance, sentiment analysis, and image and video tagging. Others can perform product categorization and tagging, as well as video analysis.

If you're interested in customer insights, mobile crowdsourcing, online marketing, and eCommerce, then this might be the opportunity for you. Clickworker also offers tasks related to content writing for eCommerce, media, and information and directory services.

​
Clickworker GmbH was founded in 2005 by Alexander Linden. Its headquarters are located in Essen, Germany. It also has an office in Rochester, New York.

How Much Does Clickworker Cost?

​
Joining Clickworker as an independent contractor is 100% free. All you have to do is register, and you're all set.

Other Things You Need To Know About Clickworker

There are other payment options

Don't have PayPal because it is not available in your country? Then don't worry as you can still receive your earnings via Transferwise. The payment is bimonthly and has a minimum amount of 10€. This option is available for residents of Namibia, Nigeria, Turkey, and Venezuela.

Independent contractors who live in the Single Euro Payments Area can have the payments sent directly to their bank accounts every month.

There will be instances when jobs will not be available

Clickworker might seem an easy way to earn money, but jobs are not always available on the platform. There are many reasons for this.

The tasks might also be available for certain Clickworkers who belong to a specific demographic. They may belong to a certain age or gender, or they may be native speakers of a certain language or they might have experience in something.

Sometimes, it can be as simple as there are just no available jobs at the moment.

You can be excluded for some projects

Clickworkers are free to skip jobs. But keep in mind that the system will tag you and will not offer you similar tasks in the future.

Clickworker's quality assurance can also exclude you from other projects. There are instances when you will be asked test questions to qualify for a task. If your answers are not satisfactory, then the task will not be offered to you.

You can, however, still join other projects in the meantime.

Like Clickworker, UHRS (Universal Human Relevant System) is another website that offers micro jobs. The good news is Clickworkers can also visit the UHRS website and complete tasks on the platform. The payment, however, will still be sent to the Clickworker account.

But keep in mind that not everyone can access UHRS. This is only available to certain countries, as well as for specific languages.

You can now complete your tasks using your phone with the Clickworker app. You can download the app on your Android or iOS phone. Just go to the App Store or Play Store to download the app.

You can complete the tasks anywhere in the world

The best thing about Clickworker is that you can work and make money whether you're located in Europe or North America or even some countries in Asia.

The majority of Clickworkers are located in the United States. 15% of the site's independent contractors are from Germany, while 25% belong to other countries in Europe. The rest comes from other countries all over the world, mainly Australia, Canada, and South America. As long as the payment options are available, you're good to go.

The variety of tasks/jobs available

Your mind will be blown away by the sheer number of tasks you can find on Clickworker. Plus, the jobs are something many people have never heard of before.

Some of these tasks include image tagging, video analysis, image annotation, lead research, and competitor research. Other tasks include writing company profiles, category texts, product descriptions, and blogs. It also offers industry solutions, such as producing content for eCommerce and directory services.

Clickworker has made it easy for contractors to receive their earnings. They can choose from PayPal, Transferwise, or direct bank deposit if they're live in SEPA countries.

​
It can be problematic for digital nomads

I've mentioned that Clickworker is available for many independent contractors all over the world. But working as a Clickworker contractor and being a digital nomad at the same time is not a good idea.

Why? Because Clickworker is not available in all countries. Let's say that you're an American travel blogger and you registered your Clickworker account in your own country. You're going to fly out to China next week, and you're wondering if you can milk a little money from your Clickworker gig for a cup of coffee or a steamed barbecue pork bun during your trip.

Well, you can still use Clickworker, but you have to give its customer service a heads up before you go so they won't flag your account as hacked or something. You should also check if the country you're a resident or traveling to accepts the payment method you're going to use to prevent any humiliating hassles.

Many Clickworkers have complained that there are so few opportunities up on the website. Plus, there are so many competing workers flocking to Clickworker that you're going to have a hard time snagging one task. It's safe to conclude that it's not a good idea to rely on Clickworker as your primary source of income.

Some tasks do not make sense

I tried one task just to see how it goes, and it does not make sense at all. The task I sign up for was a survey. The task was simple; just vote how exciting a video was and get €0.16 upon completion.

Each screenshot of a website's homepage flashed on the screen for a half-second before it disappeared. You then have to rate how calm or how exciting the homepage is. It is then repeated with the same screenshots.

My result was dismal. Its algorithm detected that my decisions were inconsistent and therefore, unqualified. The problem is it didn't give me enough time to even see the screenshot, so how does one decide if the picture is exciting or calm? Plus, the code the system gave me at the end of the survey was deemed by Clickworker's system as invalid.

Is Clickworker a Scam?

​
Clickworker is a legit company. A lot of people have earned money thanks to Clickworker. Sadly, it is not for everyone. It's not even worth your time if you're not desperate.

Judging from the feedbacks online, Clickworker is one website many people love to hate. It is riddled with negative feedback, and independent contractors accuse it of so many negative things.
Some accuse Clickworker of arbitrarily suspending or banning users, and others have accused it of stiffing its contractors. Some have even accused it of harvesting data illegally because of its requirements that contractors submit IDs and other personal information.

Plus, it's virtually useless if you frequently travel or you live in a non-SEPA country or you're a resident of a country where PayPal or Transferwise is unavailable.

In my opinion, there are better opportunities out there to make money and Clickworker is not one of them.

​If you're looking for a legitimate way to make money online and from home, you should check out Wealthy Affiliate.