If you've been approached to take out a loan via Cred Star Funding, you need to read this entire post.

It's important that you know the facts before joining this company. The owner has a long history of peddling ponzi schemes and scams and this company is bad as the worst of them.

So read on to get the facts..

Summary: I review a lot of money making opportunities and Credit Star Funding ranks up there as one of the worst and biggest scams out there.

No one should join this company because it's a ponzi scheme and there's no real way to make money with them. The profits for this company comes from new affiliates (not the investments in their trading bots) and when the recruits stop coming in, the company and everyone loses their money.

Better Opportunity: If you're looking for a legitimate way to make money from home and online click the button below. That's where I learned how to make money online and now I make more than any time in my life.

What is Credit Card Funding?

Credit Star Funding is a pretty unique scam and is unlike any other MLM that I've reviewed before.

Credit Star Funding basically claims they can help you get a $50,000 to $250,000 loan. Once you get that loan you invest in various investing bot schemes where you supposedly get thousands back.

The bot programs invest in different cryptos and claims they make you like 20% to 30% revenue which is absurdly high (they'd be creating billionaires if this were the case).

The problem here is the bot is all smoke and mirrors and the revenue of this company comes from new affiliate sign ups, not because there's a special bot making smart crypto trades.

I'll get into more what this means in the next section but I wanted to talk about the founder of Credit Star Funding.

The founder is named Riccardo Ferrari and he's been involved in ponzi schemes in the past. One of the big ones was called BitClub Network and Ferrari started Credit Card Funding as BitClub Network started failing.

A tiger doesn't change its stripes and Ferrari is a known scam pusher.

Credit Star Funding is both a pyramid scheme and ponzi scheme.

A pyramid scheme is when the only way to make money with a company is through recruitment which is the case here (there's no real product besides the ability to get a loan).

A ponzi scheme is when a company lies about where the revenue is coming from when in reality it's just coming from new recruits.

In Credit Star Funding's case they say revenue is coming from their trading bots but it's really just coming from the money new recruits spend to join.

All ponzi schemes and pyramid schemes eventually fold in on themselves because the pool of recruits goes dry.

The only people that make money are the people that get in early and were getting paid off the new recruit's money. Anyone that joins after that short period loses their money.

You Will Lose Your Money Here

About a month ago there was another "bot" that a company used to invest in various cryptos. It worked almost exactly like the one for Credit Star Funding does.

It was a ponzi scheme and I knew it was going to fold in on itself.

I told everyone to get their money out or they would end up losing it.

A couple weeks later the ponzi scheme collapsed as I predicted and all new recruits lost their money. You can read that review here.

The same thing is going to happen here as well. Eventually people will stop getting recruited and because there's no real revenue, payouts stop getting paid.

How Much To Join Cred Star Funding?

In order to let Credit Star Funding get a loan for you you have to pay a $199 commitment fee.

I looked up what a loan generation fee and it's more commonly referred to as an origination fee.

This is a fee that someone charges when a person processes a new loan. The average fee is between .5% to 1%.

There's also interest rates on the loans that can be between 9% to 18% and higher depending on your credit score.

Credit Star is a MLM which means you get money for recruiting people into the system (this is the pyramid scheme aspect of the scam).

According to Credit Star Funding, you get paid out in an unilevel structure which looks like the following: 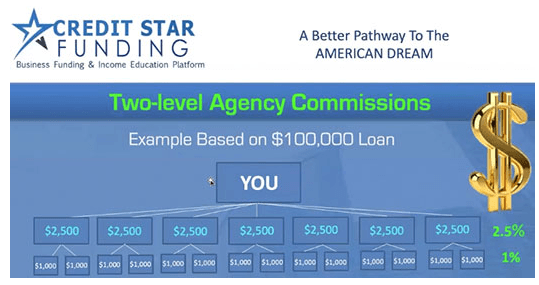 You get 2.5% of every loan on a personally recruited person and you get 1% on the people recruited by your recruits.

Where Your Loan Goes To:

Alright, so you paid your $199 fee, got your loan with high fees + interest rates, and now it's time to "invest" it.

Originally there were three destinations for your new money but one was "hacked." In reality, it most likely folded because it was a ponzi scheme.

That leads to two more choices.

The first is called Cloud Token and this a trading bot platform that invests in crypto. Again, the bot doesn't actually make money and the money comes from you dumping $200,000 into it (the money then gets redirected back to investors who got in early).

The second place is called Credit Star Forex and this is an inhouse investment opportunity (meaning it's run by Credit Star Funding).

This is another trading platform where no real profits are made.

None Of This Is Legal

Ponzi schemes and pyramid schemes are not legal in any country and all programs involved in this scheme are either one or the other or both.

This means everyone involved is committing security fraud through promotion of unregistered securities.

So if you join this company and start recruiting people into the system, you yourself can be liable.

Is Credit Star Funding A Scam?

Even if you do get in early and make money from new recruits, you can be legally liable for promoting an illegal ponzi scheme.

How do you pay that back?

Hopefully by now you see Credit Star Funding for what it is.

If you are looking for a way to make money online, you should check out Wealthy Affiliate.

That's where I learned how to make money online and it's completely legitimate - there's no taking out loans, no recruiting people or anything like.