Maybe you're a novice Bitcoin trader or you've been trading for many years now. You just want to automate the process that's why you came across a software called Crypto Coin Sniper.

You want to buy the software, but you're worried that it might be just another scam.

Worry no more because we're here to explain what Crypto Coin Sniper is, what it does, and its price. More importantly, you'll know whether it's a scam or not.

Summary: Crypto Coin Sniper is another software that claims to automate cryptocurrency trading for you. It is sold by Paul Scott, but it was developed by someone else and given to Scott as some sort of a gift.

It is not a pyramid scheme, but the product is not reliable and Scott's story is not entirely credible. Plus, there are other red flags that we're going to discuss in the succeeding article. To sum it up, better think twice before buying this software.

What is the Crypto Coin Sniper?

Trading cryptocurrencies is one of the hottest things right now for many investors. Trading this type of currency is risky, and the market has been, for the most part, volatile. But that didn't stop traders and investors from taking risks. The promise of vast returns on a small investment has encouraged many people worldwide to pour their money into cryptocurrency trading.

In recent years, various tools have been created to make crypto trading easier or more profitable. One such tool is Crypto Coin Sniper.

Crypto Coin Sniper is an automated cryptocurrency trading software. So what exactly does this software do? Well, this software recommends which cryptocurrencies investors should buy right now, as well as their corresponding price. It also tells them the right time to sell. All you need to do is install the software, let it do its thing, and profit.

So who is behind Crypto Coin Sniper?

This software is sold by a person named Paul Scott, a Philadelphia native who has a degree in journalism (or so he says). He moved to New York City after graduation, but unfortunately, he couldn't find any media-related job.

According to his video on the site, he worked as a copywriter by day and a burger joint kitchen crew at night. He also turned to blogging, affiliate marketing, and online surveys, but he was dissatisfied with his income.

In a stroke of luck, he was hired to write about Bitcoin, a gig which paid considerably higher compared to his other jobs. The client's name was Gerald Watson.

Watson apparently liked his writing so much that he asked Scott to meet up with him personally a few weeks later. In another stroke of luck, Watson shared his secret trading software to a complete stranger the moment they met. This software turned out to be Crypto Coin Sniper.

According to Watson, the software enables him to earn hundreds of dollars from various cryptocurrency trading and he was willing to share the secret with Paul Scott. Watson was so impressed that he gave a complete stranger a flash drive containing a money-making software. How generous!

Paul Scott took the flash drive home and installed the software on his computer. It didn't matter that he just met this complete stranger and he didn't know whether the flash drive contained a virus or something — Scott simply took him at his word. Scott claimed that he immediately earned $3,000 just by letting Crypto Coin Sniper do most of the work for him.

And that, ladies and gentlemen, is the story of how Paul Scott earned thousands of dollars using Crypto Coin Sniper.

At this point, it's painfully obvious that there are holes in Paul Scott's story. Don't worry because we're going to discuss these plot holes later.

A pyramid scheme is a type of illegal investment wherein a person signs up to sell a product to customers while at the same time recruiting others to join the business as sellers themselves.

It has similarities to network marketing or MLM, but what sets pyramid schemes apart is the lack of valuable or tangible products its associates can sell. If there are products, they are often overpriced or are of low-quality that distributors later find out that they are unsellable.

One distinct aspect of pyramid schemes is the recruitment part. As a distributor, you'll need to recruit friends, family members, and co-workers to build your "team."

The company will give you a "commission" for recruiting new team members and the process goes on and on. The truth, however, is you're profiting from the buy-ins of the people under you and not from the revenue brought in by the products themselves.

But the recruits and the money eventually run out, leaving everyone, except the mastermind of the scheme, high and dry.

Crypto Coin Sniper is a scam, but it's not a pyramid scheme.

Unlike pyramid schemes, Paul Scott is not encouraging people to recruit others who will purchase and sell his software. He has a product you can sell. You just don't know whether this product really works or not.

There's no recruitment part with Crypto Coin Sniper, but there certainly is a time pressure aspect ("There are only a handful of spots available..." according to the email we received) which is very common with pyramid schemes.

How Much Does Crypto Coin Sniper Cost and What is Included?

After enrolling and upon payment of the fee, you'll receive a copy of the Crypto Coin Sniper software. You'll need to watch a demo video which will teach you how to set up the software. Paul Scott promises that all you need to do is follow the directions and you'll start earning money from cryptocurrency trading in no time.

According to the video, Crypto Coin Sniper's algorithm determines which trade is most profitable. It also tells investors which coins will bring the most profit and when to trade and sell them.

Let's take a deeper look at Crypto Coin Sniper, as well as some of its red flags, to know why you should not invest in it.

Crypto Coin Sniper's website looks like someone spent some time making it look professional and sleek at first glance. But there's more style than substance in this case.

Apart from an introductory video and a form where you can enter your name and email address to begin the enrollment process, there's not much else.

There's no contact form, no company background information, no product page, or anything else that buyers might find useful.

You won't even know what the product is or who is behind it unless you watch the video on the site. For a person who claims to have worked as a copywriter, the lack of written information about Paul Scott's product or himself seems suspicious.

* Who is Paul Scott?

And that brings us to another red flag which is the lack of an office address information on the website. We only got the address in the welcome email we received from Scott, but even this looks shady too. The listed address in the email is on Park Avenue, which is a pretty upscale area in New York City. But in the Crypto Coin Sniper video, he said that he has a beach house in Florida. That is inconsistent with the address that is in the email. Take a look at the welcome email below and watch the introductory video after. 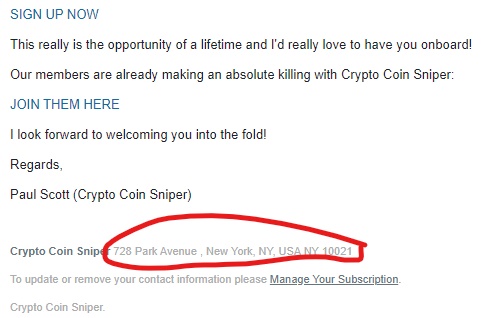 Maybe, just maybe, Scott can afford both the Florida beachfront home and the New York lease, but it shows a lack of common sense. Cryptocurrency trading is largely volatile and this boom can bust anytime, so why not save money and move to Florida instead where the cost of living is relatively lower and the weather sunnier? There are some things in his story that just doesn't add up.

So who really is Paul Scott? The truth is only the person behind Crypto Coin Sniper knows.

In the introductory video, Scott claims that "you can make up to $3,000" every day with this software. He also claimed that people can profit using this software even though they do not have cryptocurrency trading experience or even if they don't know anything about Bitcoin. Moreover, Scott claims that "it doesn't matter if you have just $5 in your bank account."

​The introductory video contains a testimonial from people who have supposedly invested in Crypto Coin Sniper and have successfully profited from it. The problem is the testimonials look and sound fake.

The persons giving these testimonials look like they're reading something from behind or beside the camera. Plus, their testimonies are wildly exaggerated and the claims of income with the help of Crypto Coin Sniper were not backed up by bank statements or any other evidence.

He makes wildly unrealistic and exaggerated income claims that he nor the people who issued positive testimonials in support of the software cannot sufficiently back up.

If I were you, I'd think twice about investing in Crypto Coin Sniper.

Here's a Better Way to Money

Hopefully by now I've talked you out of joining Crypto Coin Sniper. No one really knows if the software is effective or who is behind it.