Is Morinda A Scam? The Most Typical MLM Scheme.. 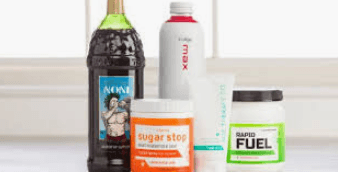 Are you thinking about joining Morinda and are wondering if it's a scam or not?

Below you'll find everything you need to know about this company including background information, price to join, compensation plan overview, product breakdown and more.

By the time you're done reading you'll know if Morinda is right for you. 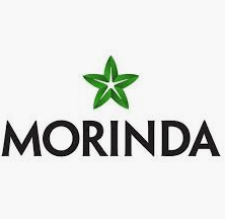 Summary: There are literally thousands of health and wellness MLM's out there and Morinda is a pretty typical one (not really a compliment).

They're also riding the CBD wave and are now offering various CBD products.

There's nothing really special about this company and this will lead to one of the biggest problems facing all MLM's - a low success rate.

Most people that join Morinda will lose money and the majority of people that do make money will make very little.

This company is not worth your time.

Better opportunity: If you are looking for an opportunity that is worth your time, click the button below. There you will see the training that taught me how to make 6 figures online:

1) What is Morinda? Morinda is a Multi-Level Marketing company that's been around since 1996. This is a good sign for a MLM and shows that it's not going anywhere anytime soon (most MLM's go out of business a couple years after launching).

This company has switched names a few times since launching and has previously been known as Tahitian Noni International and Morinda Bioactives before being sold in 2018.

Morinda is based out of Utah which is a popular place for MLM's to be and they claim they have revenue of $500 million a year.

2) How do you make money here? Like I said before this is a Multi-Level Marketing company and this means you sign up to be a distributor for a fee.

As a distributor you get to sell their products on your own for a commission.

Additionally, you get rewarded for recruiting people and building a downline. You earn money from the overall sales of the people below you.

This may sound like a good way but it's very flawed which I'll explain in the next section.

3) Are there any red flags? There hasn't been many issues with this company in the last couple of year but in the past they've had some problems. In the 90's they were sued by several states for making unsubstantiated health claims.

As a result they had to stop making certain claims and payback any customer who requested a refund.

In 2007 one of their products were supposedly contaminated with cocaine and one man died because of it.

Is Morinda A Pyramid Scheme

Pyramid schemes are illegal to operate in every country and this is especially true in America where Morinda is based out of.

Could a pyramid scheme last for over 25 years without collapsing or being sued by the government? Probably not.

So Morinda isn't an illegal pyramid scheme and instead just has elements of one.

An illegal pyramid scheme looks entirely like the picture above and this usually happens when recruiting is the only way to make money.

Morinda does have products to sell and you can sell them to customers without recruiting for retail commissions.

However, Morinda used to operate in a grey area because they had autoshipment requirements (not entirely sure if this is still a requirement) if you want to receive all benefits of the compensation plan.

When too much revenue of a company's is coming from their own distributors buying products, that also means you're in an illegal pyramid scheme.

You'd have to ask the person recruiting you how much of their sales come from recruits and how much comes from retail customers.

If recruitment sales make up more than half that's a MAJOR red flag.

MLM's are basically universally hated by everyone and there's online communities that exist to just make fun of people that join them.

The hate is pretty justified and I think people are just tired of being recruited to join downlines and stuff like that.

But the main source of the hate comes from the success rate for all MLM's being incredibly low.

I mean REALLY low (up to 99% of people that join a MLM lose money).

I don't think people like seeing their parents or relatives or friends get ripped off by these schemes.

So is Morinda different than other MLM's? Nope.

Their success rate is just as bad and you can see this through their income disclosure form:

The chart above is the different ranks you can achieve at Morinda and how much each group is making.

About 95% of the people in this company are either IPC, Coral or Jade rank.

If you look at the chart that means 95% to 99% of the distributors (that actually make money) at Morinda make less than $648 for the year. This comes out to less than $2 per day.

The only people making a liveable salary here are the people at the last rank and very few people make it there (1 in 2500).

63% of the people that join Morinda make nothing at all.

As you can see the earning potential is really bleak here.

Below is some even more terrible statistics when it comes to MLM's:

As you can see you'll want to stay away from all MLM's, not just Morinda.

How Much To Join

There's a couple costs to joining this company and the first cost is buying a Product Pack.

There's various packs to choose from and they are:

There's a 90 day challenge here where you pick a pack, get a business plan and try to earn money: 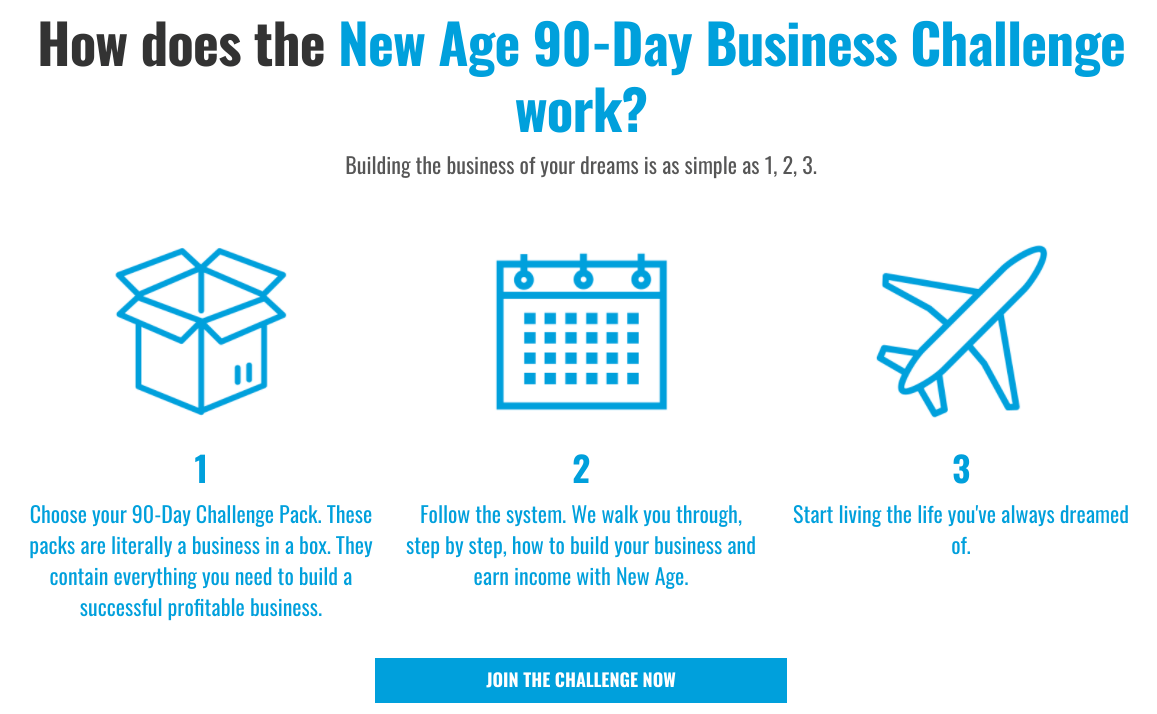 Apparently if you don't get the results you're looking for you can a get a refund.

There's also additional costs to running a business that you have to factor in as well.

At one point they required distributors to purchase products every month ($120+) to get full access to the compensation plan but I'm not entirely sure if that's required anymore.

The compensation plan is very complicated like most MLM's are (Morinda is more complicated than most, though). If you're unfamiliar with MLM jargon and charts it's not going to make much sense to you.

I'm going to summarize the main parts so you have a better idea of how you make money here.

At Morinda there's 12 different affiliate ranks and they are:

You go from one rank to another by hitting certain goals (mainly group sales of your downline).

You get various bonuses for ranking up too.

At Morinda you get 20% on all sales of people you personally enroll and you also earn percentages on sales made by your downline.

You earn down to the 5th geernation which is explained by the chart below:

Residual income is where most of the money is made and is the money you earn from the sales of your downline.

In this case it's payed out in a unilevel plan and looks like the following:

How much you earn depends on your affiliate rank and how much your downline sells.

Retail sales along with recruiting commissions make up the majority of the income opportunity at Morinda.

There's smaller bonuses as well including:

If you'd like to know the details of these bonuses, read the compensation plan I linked above.

Morinda products are really expensive and this is going to be a huge hurdle for you if you decide to join.

For example, one of their products is called Tahitian Noni Juice and it costs $30 for a 500mL Bottle: 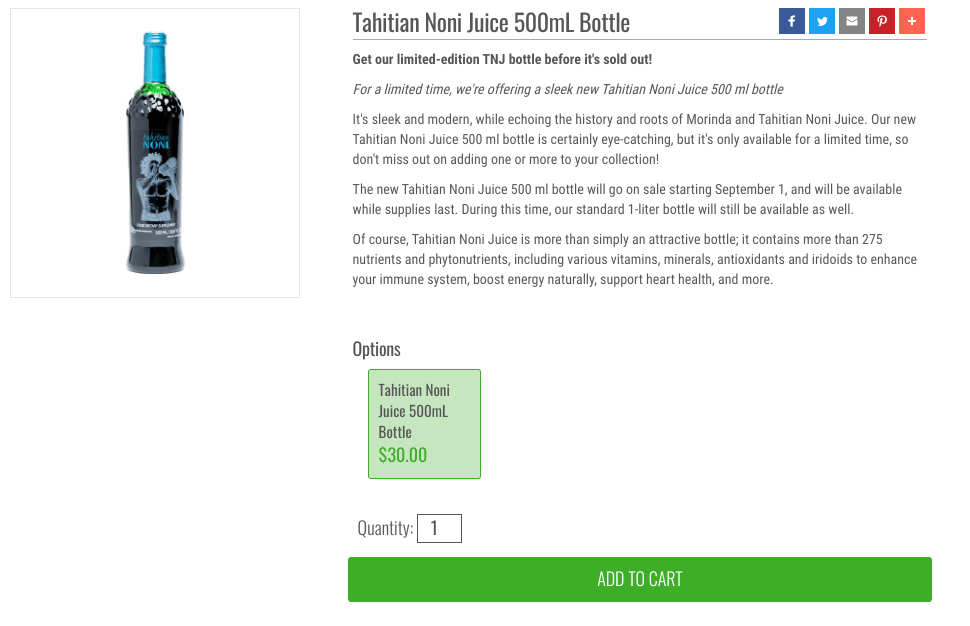 Do you know how many serving sizes are in this bottle? 8.

If you wanted a month's supply of this juice it would cost over $100. There's not too many people that are going to want to pay this much for juice.

I have no clue if this juice is legit or not but I guarantee you can get the same results from much cheaper products.

CBD is extremely hot right now and it's one of the biggest health trends of the last decade.

The thing is, though, there's thousands of CBD companies and new ones popping up every single day.

Many of these companies are MLM's and others are not.

So while there's potential to make sales with CBD, you're going to have a hard time competing against other more known brands.

Overall there's more to dislike here but there's a few things to like:

Here's what I dislike about Morinda:

Is Morinda A Scam?

There's a lot of things I don't like about Morinda but to call it an outright scam is going a little too far.

I'd say it's more just a bad business opportunity.

If they still have autoshipment requirements to get access to the compensation plan I'd be more willing to call it a scam.

When you add up everything you can see why most people fail here:

And more. There's just not a lot to like here and it's going to be very, very hard to succeed.

Hopefully by now you see Morinda for the bad opportunity it is.

If you're looking for a legitimate way to make money online and from home you should check out Wealthy Affiliate.

Wealthy Affiliate is the single best place to learn how to make money and it's where I learned how to make 6 figures on the internet.

I now work full time online from home and make more money than ever before.

The best part is Wealthy Affiliate is completely free to try too!