Is Nu Skin A Scam Or Pyramid Scheme? The TRUTH Revealed!

Price to join: At least $100 for individuals and at least $1495 for business entities

Overview: If you're looking to make money with Nu Skin I have good news and bad news for you - Nu Skin isn't exactly a scam or an outright pyramid scheme but I definitely DON'T recommend you joining.

Nu Skin is a MLM which is EXTREMELY difficult to succeed with and only .4% of Nu Skin distributors make more than $100 per month. That's really, really bad.

What Is Nu skin?

Nu Skin is one of the more popular MLM companies around and they got their start in 1984 in Utah. Nu Skin was founded by Blake Roney, Nedra Roney, Steve Lund, and Sandie, N. Tillotson

This company sells various natural skin care and other natural health products. Their most popular products are anti-aging skin lotions and creams.

This company is not without controversy, though and has settled a few lawsuits through the years.

In 1992, Nu Skin reached a settlement with 5 states for overstating their income to new distributors and deceptive advertising.

In 1994 they paid a million dollars to the FTC for deceptive marketing based around their product and making unproven claims.

In 1997 they had to pay a fine to the FTC for 1.5 million for "unsubstantiated promotional claims."

In recent years China has charged Nu Skin as being an illegal pyramid scheme and was sued by China as a result. In 2014 Nu Skin settled for $47 millions with China and later paid an additional $750,000 for bribing Chinese officials.

So this company has had some issues in the past and it's definitely worth considering these lawsuits before joining.

Is Nu skin a pyramid Scheme?

Some people consider all MLM's pyramid schemes which isn't necessarily true. However, Nu Skin has settled in court for being a pyramid scheme.

The reason people consider MLM's pyramid schemes is there's such a huge reliance on recruiting people to make real money.

When you recruit someone you end up getting a piece of every sale they make and a piece of the sales your recruit's recruits make.

Below illustrates what happens in these kinds of systems:

MLM's are designed only for the people at the top of a pyramid to have any real chance at making money. Eventfully the market becomes over saturated with the product your selling and it becomes increasingly harder to find recruits.

In fact, MLM's usually only stay out for 2 years because of this. So if you're going to get involved in Nu Skin or any other MLM you better work your butt off recruiting people.

As you saw in the last last section, profits tend to stay at the top of the pyramid and only a few people make any real money.

Now you might be saying to yourself "how is that any different than a regular corporation where the CEO makes millions and the people below don't make anywhere near that."

Now there may be income equality in regular 9 to 5's but it isn't even close to what happens in MLM's.

In fact, only 1% of people in MLM's make any money - the rest lose it.

How much to join nu skin?

There's one pretty big selling point when it comes to MLM's and that it's pretty low cost to get started.

Do you know how much it costs to start a brick and mortar business? Around $100,000!

That's a lot of money and most people will either spend their entire life savings or have to take out a loan.

Now this doesn't mean I think you should join a MLM - affiliate marketing and Ecommerce are far better alternatives.

But joining a MLM is definitely cheaper than starting a brick and mortar and to join Nu Skin it costs $100. This is the minimum order you need to be recognized as a distributor.

So while statistically speaking you'll end up losing your initial investment, $100 shouldn't be enough to sink you.

What is Nu Skin's compensation plan?

MLM compensation plans are extremely difficult to decipher and use complicated language and often times are very long - I've seen some that are 50+ pages.

Nu Skin's isn't quite that long or crazy but it's definitely still confusing.

I'm not going to go over every single detail and instead I'm going summarize the main points.

If you want to look at the whole thing for yourself, click here.

When you put in your order for Nu Skin products to sell you get them at a 25% discount. This means you can sell them and make a 25% commission. This is definitely on the higher end of potential commissions in the MLM world.

Like I said earlier, the money is in building your downline. You can try and sell products to customers at 25% or you can recruit people to sell for you and get 5% of their sales.

If you teach your recruits to recruit you get a percentage of their sales as well.

There's even more to the compensation plan but those two points are the main ones you should understand.

What kind of products does nu skin sell? 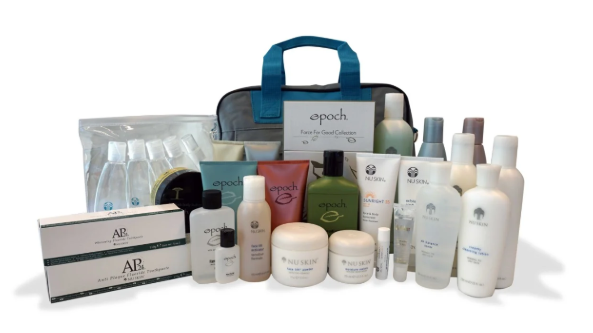 Despite being called The Affiliate Doctor, I'm not a doctor and can't really get into the science of the products Nu Skin sells.

I can't really say if their skin care or anti-aging lotions and creams work but Nu Skin has been sued and settled million dollar law suits for being misleading in their products effectiveness in the past.

I don't really think any lotions or creams work like they say they do and honestly Nu skin's line of lotions are probably equal to what you'll find in the average store.

There is one thing you should know about Nu Skin's products, though - they're expensive.

Remember, you making money depends on whether you or the people you recruit can sell Nu Skin's products.

Some of the lotions cost hundreds of dollars and it's going to be difficult to find customers for that. You have to be a real good salesman to make consistent sales of $100+ lotions.

I personally don't think you should join Nu Skin but there's a few things that I do like including:

1) Been around for 30 years: MLM's come and go but a few stick around for a long time. Nu Skin has a long history and make billions a year - they aren't going anywhere anytime soon.

2) Products are decent: Nu Skin sells products that are expensive but they seem to be pretty decent. Natural products are growing in popularity and there's certainly a market.

1) Products are overpriced: Do you know anybody that wants a $100 anti-aging cream? Maybe a few people but to make it big you have to sell A LOT of lotions.

2) Crowded market: Lotions and health products have very loyal customers. This means people made a decision a while back who was there favorite brand and tend to stick with it. Changing their minds isn't going to be easy.

3) Low success rates: MLM's are extremely hard to succeed with and Nu Skin is no different. In fact, only about half a percent end up making over $100 a month. You can find better ways to make money with the same effort.

4) Problematic history: Nu Skin has been around for a while but has settled several lawsuits in that time. Some of the lawsuits are pretty bad including being a pyramid scheme, deceptive advertising and lying about income to new distributors.

Hopefully by now you've decided not to join Nu Skin - it's just too difficult to make any money with them and the success rate is so low.