Is Plexus Worldwide A Scam? You’ll Want To Read This Before Joining

If you're here I'm guessing you were approached to join Plexus or recently found about them and are wondering if it's a scam.

There's a lot to understand about this opportunity and this post will show you everything you need to know.

By the time you're done you'll know if you should join or not.

Summary: Plexus is a MLM company in the weight loss market. While their products are semi-popular you should skip this business opportunity.

There's so many weight loss products to compete against and it's going to be hard to gain any traction. At the end of the day more people end up losing money with this company than make money.

Better Opportunity: If you're interested in making money from home and don't want to bother friends and family (which you'll have to do with Plexus) you should click the button below.

You'll learn how I was able to quit my job and work full time online!

What is Plexus Worldwide?

Plexus Worldwide is a company started in 2006 in Arizona and is a MLM company.

Being a MLM company, they don't spend money on advertisement and marketing. Instead they allow people to sign up as distributors and to sell the products themselves. They get a commission on each sale and a commission when they recruit people into the system.

This type of business scheme is riddled with problems and I'll explain more later on but most people just end up losing money.

Most MLM's don't last more than a few years so the fact this company has been around for 13 years is a plus.

There's been some controversy with Plexus in that time, however.

The FDA warned Plexus to take down some of the health claims made on their website for being false.

The America Cancer Society asked them not to use their name in association with their Breast Check Kit and The Environmental Research Center filed a lawsuit claiming Plexus hadn't properly disclosed their products contained lead.

The ethics of this company are certainly questionable.

Is Plexus A Pyramid Scheme?

Not all MLM's are pyramid schemes.

Some people like to brand any and all MLM's one but it's not true. So I'm not going to say Plexus is a pyramid scheme (which would be illegal) and instead has similarties and elements of one.

The picture below explains what I'm talking about:

As you can see that looks like a pyramid and it is. BUT only a part of the commission structure looks like the above picture at Plexus (the part that involves recruitment).

If recruitment was the only way to make money, you'd be in a pyramid scheme but you can sell Plexus products directly to customers and earn a commission that way.

Recruitment is where the money is, however, and you'd have a hard time being successful without recruiting.

Success Is Rare At Plexus

MLM's are very flawed and this type of system produces a few big winners while the rest make little money or lose money.

The chart below sums everything up:

There's various ranks you can achieve at Plexus that are based on your performance (sales + recruitment).

As you can see 82% of people never get past the first rank of Ambassador and only make on average $300 FOR THE YEAR.

The next group is the Senior Ambassador which makes up 5% of all people who've joined Plexus. They make $1707 for the year which comes out to $142 per month and about $4 per day.

After that we have the Silver Ambassador which makes up nearly 9% of the people at Plexus. This group makes $3778 for the year which comes out to $314 per month and about $11 per day.

So 96% of people who join Plexus make less than $11 per day and the overwhelming majority makes less than a $1 day.

Does this sound like a business you want to get involved with? Of course not.

If you want to learn a better way to make money from home and online, click below:

How Much To Join Plexus?

If there's one good thing about MLM's in general it's that they're usually pretty cheap to join.

This is especially true when you compare the cost of joining a MLM to starting a brick and mortar business. The first is a few hundred and the second costs $100,000 on average.

Technically it only costs $34.95 annually to join Plexus but there's more expenses you'll have to pay.

In order to make sales you'll need to buy the products and there's various packs you can purchase from Plexus, which are:

There's another hidden cost as well. In order to be eligible for commissions you need to sell $100 worth of products per month.

It's going to take you months before you're selling that much which means you'll have to sign up for autoship.

This means $100 worth of products will be sent to you every month and you have to pay for it.

MLM's are notorious for having very complicated compensation plans. If you're unfamiliar with MLM jargon it's going to be really hard for you to understand how you make money with Plexus.

If you want to read the plan for yourself, click here.

You can also watch the video below to learn more:

I don't think it's important to understand the ins and outs of the compensation plan and instead I'm going to just summarize the most important parts.

The first thing to understand here is the different ranks you can achieve at Plexus.

You get to the next rank by reaching certain goals. For instance, to go from Ambassador to Senior Ambassador you have to recruit and maintain two commission qualified affiliates.

To get from Senior Ambassador to Silver Ambassador you have to recruit and maintain 3 recruits.

This goes on until you reach the Diamond Ambassador rank which requires you to recruit and maintain 7 commission qualified affiliates and have a total downline volume of 4500 GV.

One of the ways you can make money with Plexus is by selling their products directly to customers and earning a commission.

When you get someone to join your downline and they buy one of the product packs you get a 50% commission on it.

This is the part of the scheme that is closest to a pyramid scheme and is also where the majority of the money is made.

The commission structure here is based on an unilevel structure and looks like the following:

How many levels you can earn from depends on your rank. If you're a Senior Ambassador you earn down to level 3.

If you get up to Senior Ruby Ambassador you get can earn up to 7 levels of your downline.

There's various bonuses you can earn as well including a Rank Achievement Bonus (bonus you get when you go from one rank to another), Bonus Pool, Sapphire Bonus Pool, Diamond Bonus Pool, and more.

These bonuses aren't that important to know until you're already making money with Plexus. 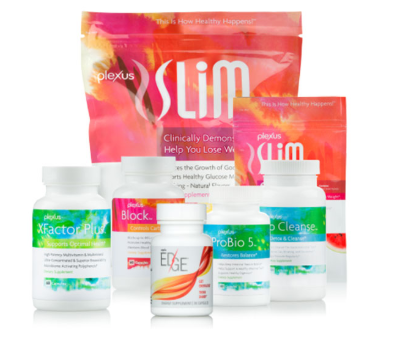 If you're planning on selling for Plexus you should probably understand what products they offer.

They're most known for their Slim product which is an appetite suppressant and used for weight loss purposes.

There's plenty of other products offered too including:

This is where you'll find the Slim as well as fat burner pills, vanilla and chocolate whey protein and other products.

In this section they offer various products that supposedly help with your nerves, different vitamins, probiotics and more.

They offer a line of skincare products known as Joyome as well. There's various products here that help with different products.

In this section is two different creams and a breast check kit.

This section mixes and matches the various products and let's you save by combining them.

One thing I would say about these products is they are pretty pricey and I don't think you'll have an easy time selling them.

Most people will think they're too expensive.

I'm not a fan of Plexus and think you should skip this opportunity but there's things I like about it including:

Is Plexus A Scam?

So at the end of the day you're probably wondering if Plexus is indeed a scam.

I think it's very close and there's definitely somethings that make this MLM very close to a pyramid scheme but I don't think it's a complete scam.

Instead I think it's just a bad business opportunity.

Some people do make very good money with Plexus but it's rare. Most people either lose their money or make less than a $1 a day.

Hopefully by now you've decided Plexus is not a good fit for you.