Is Primerica A Scam Or Pyramid Scheme? (Must Read)

Summary: If you're here you're probably wondering if you can make money with Primerica and if it's a scam or pyramid scheme.

I don't think it's a pyramid scheme or scam exactly but I DON'T recommend you join this company. It's extremely hard to make money with MLM's and that's exactly what Primerica is.

If you are looking for a legit way to make money from home and online, you should consider Wealthy Affiliate. This is the place where I learned how to quit my job and you can try it completely free.

Primerica is a company that's been around since the 1970's and they sell different insurance and financial products.

I'll go more into their products later in this post but here's some of their more popular services:

As you can see they offer a lot of different products and services and most are decently well reviewed - Forbes even named Primerica one of the 50 most trustworthy financial companies.

My problems with Primerica have nothing to do with the company or their services - if you're thinking about signing up I would say go for it.

I DO NOT, however, recommend you joining the company as a contractor to make money. The reason I say this is MLM's are extremely difficult to make money with and most people just end up losing their money.

MLM is a business model that just doesn't work for most people. In the next section I'll explain why.

Is Primerica A Pyramid Scheme?

The second way of making money, building a downline, is why people think MLM's are pyramid schemes.

This is how MLM's play out. While you can make money from commissions by selling Primerica's services, the real money is in building your downline.

If you're at the bottom of the pyramid or downline, it's incredibly difficult to make money. It's actually almost impossible.

The pool of talent to recruit under you starts to dry up and the market becomes saturated with the service or product you're providing.

This leads to one of the most mind blowing statistics when it comes to MLM's..

MLM's Have A 1% Success Rate

This means only 1% of people that join a MLM make money and the rest lose money.

The reason for this is because of how MLM's work. They're not designed to spread the money around. They're designed to reward the top people disproportionately than the people on the bottom.

Commissions are always flowing upwards and the only way to make serious money is to be at the top.

There's an even more alarming statistic with MLM's too - of the people that do make money, the median is only $2400 FOR THE YEAR.

$2400 for an entire years work isn't even close to a living wage. Factory workers in third world countries make more than this.

So while some people have the skills to make hundreds of thousands a year and even millions, most don't even come close to sniffing that. Most people just lose money and of the people who do make money, they don't make enough to justify how much work and effort they put in.

How Much To Join Primerica?

There's one thing I like about MLM's and it's that it doesn't cost too much to start usually.

Think about this: it costs on average $100,000 to start a brick and mortar business. That's a pretty big investment and means you'll either have to take out a bank loan or spend a lot of your savings.

The success rates for brick and mortars isn't exactly high either and there's a lot of risk involved when starting a business.

To join the Primerica program it costs $99 to start and $25 a month after. If you spend a couple thousand on training and other stuff like that you'll only be out around $5000 if you don't make things work.

MLM's Are Hot for 2 Years

In order to make a lot of money doing MLM you have to be an expert at recruiting people to sell for you and you have to get into a good company at the right time.

I have a friend who used to do MLM's (he quit because he hated the business model) and he was quite successful at it - he was one of the lucky few who made a full time living from MLM's.

One of the things he used to tell me is MLM's are only hot for two years and if you miss that two year window the odds of you making money drops significantly.

There's many reason for this:

1) There's only so many people you can recruit. When a legit MLM program comes around everyone is recruiting for their downline - get in too late and there's really no one left to sell under you.

2) The market gets saturated. After the two year hot period the pool of people to sell to dries up as well.

That's why people in MLM's tend to jump around a lot. The goal is to get in early, build your downline, make as much as possible than hop to the next

Primerica has been around since the 70's so it's probably too late.

What Services Does Primerica Offer?

Primerica is a little unique in the sense it doesn't sell physical products like most MLM's and instead just sells financial and insurance services.

This is good and bad. MLM's that sell physical products tend to be overpriced and in very saturated markets like natural health. It's almost impossible to sell these products.

Unfortunately, though, Primerica insurance and other services tend to be more expensive than others. Also, they don't give free quotes. These are two things that are going to make selling Primerica difficult.

Here are the services Primerica offers:

1) Financial needs analysis: This means looking at someones financial situation and coming up with a plan for better finances.

6) Pre-paid legal: This is a legal option most people say you shouldn't get.

What Is Primerica's Compensation Plan

I'm just going to go over briefly how much you earn.

For actually selling the services you can earn anywhere from 25% to 95%, depending on the volume of sales. Here's a chart the looks at the different levels you can get to: 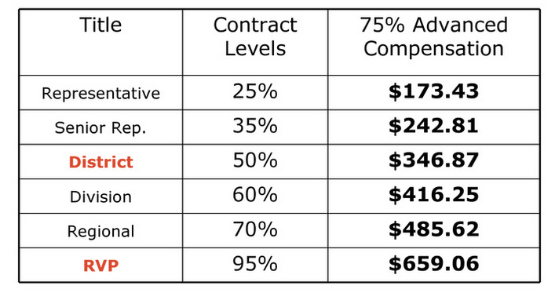 You also get 10% of the sales your downline makes. If you can get a large number of people selling under you, this can be very lucrative for you.

Here's a video that goes over every detail in depth:

You'll Have To Pass State Tests

Once upon a time I was an insurance salesman for State Farm - I sold auto, home and life insurance.

Here's the thing about selling insurance - you need a certain amount of time in class with a certified instructor and you need to pass a difficult insurance test.

I always did well in school and taking tests was by far biggest strength. I didn't always do my homework but I usually aced my tests.

Even for me the insurance coursework and test was pretty difficult. You have to memorize a lot of little facts and the textbook is hundreds of pages long.

Most people need 3 or 4 attempts to pass and it took me 2 times. If you're not a good test taker and don't feel like learning a textbook worth of information, this is something to keep in mind.

I personally don't recommend Primerica as a business opportunity but there's still a few things that I like.

1) Relatively low start up cost: Like I said before, 99% of people end up losing money in MLM's but losing $500 isn't the worst thing on earth.

2) Decent company rating: The reviews of Primerica's products are decent enough that an experienced salesman could definitely sell them. Their overall reputation is pretty good too.

3) Legitimate services: Primerica also offers legit services and they aren't a scam in this regard.

1) MLM business model is hard to succeed with: MLM's are designed to keep most of the money at the top and it shows with the overall success rate of MLM's (1%). Most people just end up losing their money.

2) Expensive products: Primerica isn't cheap so it may be a hard sell to get people to sign up.

3) Have to pass test to be certified: You can't sell insurance unless you pass a pretty difficult test and get 20 hours of classroom time.

Hopefully I've talked you out of joining Primerica by now - I just don't think this company is worth your time and it's going to be extremely difficult to make any money with them.

If you're still interested with making money from home and on the internet, though, you should check out Wealthy Affiliate. Wealthy Affiliate is the single best place to learn how to make money online and you get all the training and tools necessary to exceed. Plus you get a community of over 1 million internet marketers to ask questions to.

The best part? it's completely free to try.

30 Day SMMA Review – Training That Will Change Your Life?