Is Secret Affiliate Machine a Scam? A Postmortem Examination of an Affiliate Marketing Program

It was a program created by Jordan Mederich which became very popular even though it was short-lived.

Learn about this program, how it worked, how much it paid, and more!

Price to join: Free (but you need to pay to use Clickfunnel)

Summary: The Secret Affiliate Machine is a now-defunct affiliate marketing program associated with Clickfunnels. Signing up was free and it was relatively to use. It was also very profitable for its affiliates. But more than a month after it was launched, it was found to be in violation of Clickfunnels rules and was subsequently shuttered.

So why was it axed? Was it a scam? Find out more below.

What is the Secret Affiliate Machine?

If you want to join the Secret Affiliate Machine, then I'm sorry because you can't. Why? Because it got shut down in mid-May 2019. It has been banned by Clickfunnels and its affiliates have migrated to other marketing funnels since. Essentially, this is a postmortem examination of what went wrong with this product.

But what was the Secret Affiliate Machine or SAM Funnel?

SAM was a done-for-you sales funnel that members/marketers used to drive traffic to their sites and grow their businesses. It was developed by Jordan Mederich, a Twin Cities-based consultant who is also co-founder of IMAcademy.com and CMO of Lifestyle Design International.

So how did the Secret Affiliate Machine work?

How did one sign up to get the Secret Affiliate Machine?

The first step was to sign up with your name and email address. The sign-up page contained an "inspiring" video which prospective affiliates were encouraged to watch before they signed up.

Note: the videos have become unavailable since the middle of May 2019 after SAM funnel was hit with the Clickfunnels ban.

Prospective affiliates were then asked to create a free website account in a platform called Clickfunnels. This website was the product, as well as the platform where affiliates earned a commission for every visitor who registered through their site. Commissions can be as little as low as $38.80 or as much as $500 per month.

After they have created their Clickfunnels account, they must come back to the page and proceed to step 3. 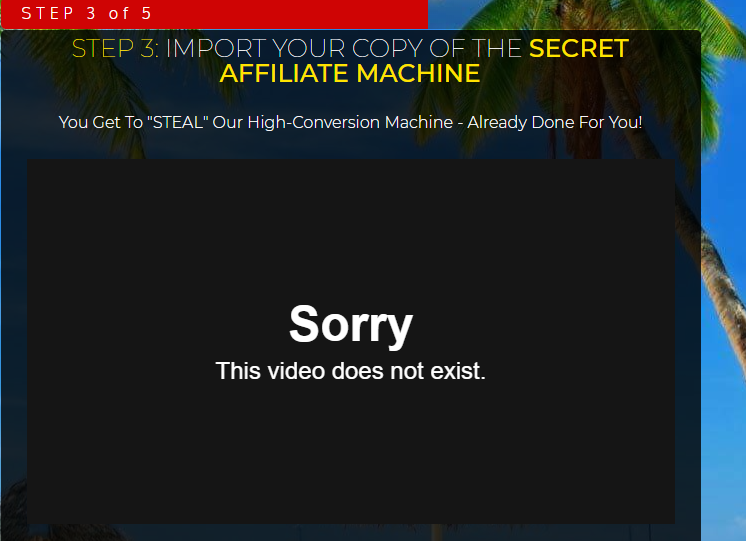 Affiliates could begin to use the SAM funnel after they have downloaded it. It's important, however, to watch the whole video (which you can't because it doesn't exist anymore) to ensure that you download the funnel properly. The video also contained information on how to edit it and add your unique affiliate link from Clickfunnels so you can get paid.

Affiliates can start sending traffic to their account after downloading the SAM funnel. The video on the page was created to help them drive traffic to the website. These site visitors could join the account through their unique affiliate link.

How Much to Join Secret Affiliate Machine?

Getting the Secret Affiliate Machine was free. But that didn't mean the people who signed up for it did not spend money in using it.

Although the Secret Affiliate Machine was free, Clickfunnels was not. Clickfunnels offers a 14-day trial at no cost, but you need to shell out $97 to continue using it. If you want the Etison Suite, you'll needed to pay $297 per month. These fees do not include the extra costs and the various upsell Clickfunnels will offer.

SAM funnel users also needed to pay for traffic from solo ads sellers such as Udimi, Youtube Ads, Traffic For Me, and other sources.

How Do You Earn with Secret Affiliate Machine?

The commission rate for the Secret Affiliate Machine is set at 40%, while the commission per referral is pegged at $38.80.

Members who signed up with Secret Affiliate Machine received an email from another affiliate asking them about their Freedom Number, a code for one's target monthly income or the amount that they wanted to earn in their businesses. If you received an email, you would reply with whatever monthly figure you want, whether it's $5,000 per month or even as much as $10,000.

What Happened to the Secret Affiliate Machine?

In the middle of May 2019, Jordan Mederich posted a rather cryptic status on Facebook. A flood of encouraging comments followed this post, and it was painfully obvious that it was about the Secret Affiliate Machine.

I can only confirm that in mid-May, the Secret Affiliate Machine was finally axed by Clickfunnels. There is no clear reason why the sales funnel was axed as Clickfunnels did not elaborate its decision online. We can only surmise that it violated Clickfunnels' ethics rules which we will talk about here.

The second ethics rule is honest and clear advertising. Affiliates are required to clearly state any prerequisites they have when giving something away.

Another rule is the substantiation of any claims made by the affiliate. According to Clickfunnels, all claims should be true and backed by evidence.

Affiliates are required to disclose who they are and what they do/offer before they get customers to buy Clickfunnels when they advertise on social media platforms.

Lastly, affiliates are encouraged to develop their own bridge funnels before sending customers to Clickfunnels. Affiliates are prohibited from replicating Clickfunnels design or using trademarked terms.

What Did Mederich Replace it With?

Days after the demise of the Secret Affiliate Machine, Mederich was already plotting a comeback. There were whispers of SAM funnel 2.0, but ultimately he launched a new affiliate marketing group called the Expert Launch Core. 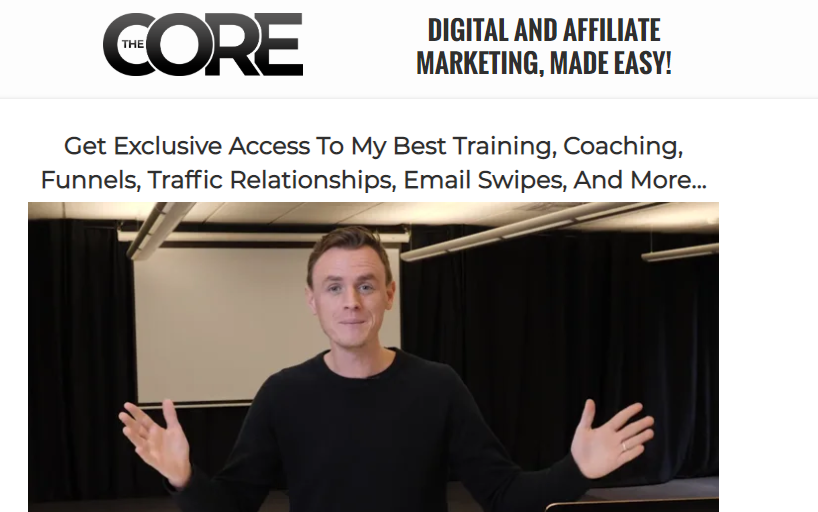 Here, current members and SAM funnel members can get instant access to the Expert Launch Core's member's area. Members can download all courses (past and current) and funnels made available by Mederich.

Core members get early access to new or enhanced tools, plus recognition in the Core Facebook Group. Members get exclusive access to Jordan's expertise and the group's Elite Coaching Crew. They are allowed to contact the Crew directly through the Core's support line.

Members get access to the Core's funnel library, as well as various email swipes and future funnels that will be released. Core affiliates will receive a 40% commission every month for sharing and successfully recruiting someone else to the program.

And how much is this new program? Core membership costs $97 per month.

Was Secret Affiliate Machine a Scam?

Was Secret Affiliate Machine nothing but a clever scam?

Well, since it has been shut down, the point is already moot. But apparently, many affiliates benefited from it judging from the number of people who posted encouraging comments in Mederich's post in May.

One thing's for sure: it definitely violated Clickfunnels' ethics rules so it was shut down.

So where did SAM funnels go wrong?

According to Clickfunnels, the platform is not a get-rich-quick scheme, and affiliates are not allowed to claim that it is a get-rich-quick scheme. Additionally, affiliates must be truthful and clear in the advertising. They must also be able to substantiate any claim they make, as well as issue a disclaimer that the results will not be the same for everyone even if they followed the instructions to the letter.

But take a look at the screenshot below. Mederich claimed that he made over $50,000 in passive income using the SAM funnels. Members who sign up and use the same marketing funnel can copy him. It did not contain a disclaimer saying that the results might not be the same for affiliates who used the sales funnel.

So will the Core, Mederich's new venture, turn out to be SAM funnels 2.0? That remains to be seen.