Is Six Figure Stamp Club a Scam? Or Another Cunning Pyramid Scheme? 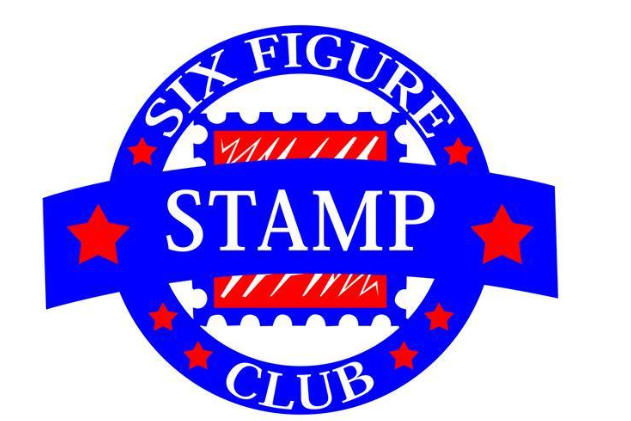 It has little to do with stamps and there's a large chance you won't be earning six figures anytime soon.

So, what is the Six Figure Stamp Club? What is its background and how do you earn money by joining this so-called club?

Is it a a scam, legit or just another pyramid scheme?

Find out more by reading our review.

Price to join: Depends on "level" or tier

Summary: Six Figure Stamp Club sells lead packages at discounted prices to its members. Members can use these leads for their own business or they can resell these leads to others.

This is definitely not a

It's completely free to try too! To learn more click below:

What is Six Figure Stamp Club?

As an older millennial, I am one of those people who still remember how to use rotary phones, cassettes, and pagers. I have an odd fondness for the post office, as well as sending and receiving letters and postcards.

But even as a holdout for the revival of postal services and writing letters, I have to admit that I haven't sent or received a letter or postcard since 2014. In fact, the postman rarely makes the rounds around our neighborhood these days.

So when I read about the Six Figure Stamp Club, I was puzzled. I can easily wrap my head around the words "Six-Figure," but I was bewildered when it was followed by the words "Stamp Club."

Is there a mafia somewhere hoarding antique stamps in someone's basement and selling them for lots of money on eBay? How do I join this highly profitable if somewhat sinister philately club?

So imagine my disappointment upon learning that it's not a postal service revival nor a super secret philately club but a direct mail membership program run by a shady company. Members can buy leads packages and "mailling materials" [sic], and become licensed resellers who can also now resell these leads. They can resell these lead packages to prospective Six Figure Stamp Club members or use these leads for their own businesses.

To put it simply, Six Figure Stamp Club affiliates will send a letter or postcards to their leads. Once received, the recipient will determine if they also want to be an affiliate and pay you a certain amount of money for the membership.

The leads packages are sold at discounted rates for members, while retail prices are available for non-members.

Once you resell these leads, you'll get cash and stamps by referring other people to the Club.

Once your recruit signs up, congratulations because you are now their sponsor. He or she will pay you, along with another sponsor, a membership fee plus a book of stamps. This new affiliate will then send those letters to someone else hoping that they, too, will take the bait. And it goes on and on and on and on...

How Much To Join Six Figure Stamp Club?

Once the letter, the stamps, and your payments are received by your sponsors and the company, you'll get your own letter templates and you can start sending them out to other prospective recruits.

So how much should you pay if you want to be a member?

When it comes to Six Figure Stamp Club membership fee, there are several tiers. 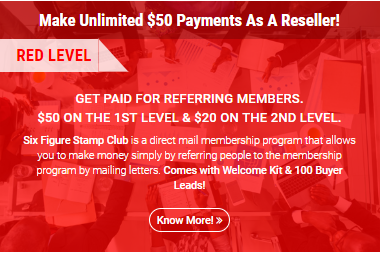 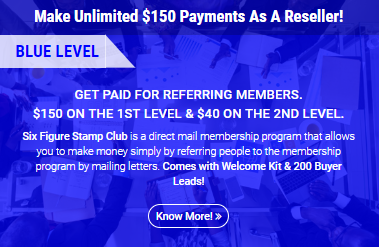 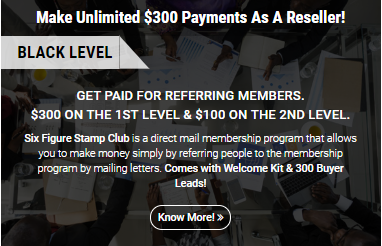 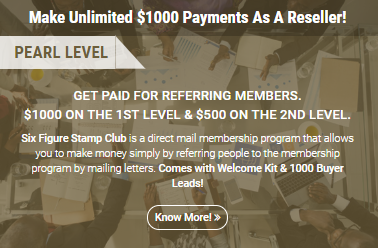 Note that you need to send cash to all three addresses, and the worst part is, the company has a strict no-refund policy upon confirmation of the order.

Six Figure Stamp Club does not have a compensation plan. In fact, in its welcome letter, the company explicitly states that it "does NOT guarantee income." The company asserts that "your income will base on your experience, work ethic, time, and amount of effort you put into the program."

So, how will you, prospective Stamp Club member, recoup your initial investment?

You'll need to send out those letters in hopes that you'll be able to dupe someone else into signing up for the Six Figure Stamp Club and becoming their sponsor. You'll receive the membership fee and the book of stamps. Alternatively, you can use the lead packages you'll receive from the club for your business.

According to its website, Six Figure Stamp Club only offers lead packages available at discounted and retail prices, as well as mailing materials. There are no other tangible or valuable products this company offers.

First and foremost, the company only has a PO box listed as its address. That's a red flag already.

Also, the company only has leads packages to sell to its members, and this is neither tangible nor valuable. You have no way of knowing whether these leads truly exist and are fresh or if the company is just sending you on a wild-goose chase. Additionally, if you visit Six Figure Stamp Club's website, the so-called product is described in vague terms that people will not easily understand.

The information on the site are also vague. I had to dig a little deeper just to find how one can become a member of the Club as the explanation on the website was not explained sufficiently.

It's basically a type of pyramid scheme.

To become a member, you'll need to pay two of your sponsors a set amount of money plus books of stamps each. You even need to pay the company a fee just to get access to the leads package. Then and only then you can begin to send out letters hoping that someone out there will sign up so you can recoup your investment and get those books of stamps too.

Another issue with Six Figure Stamp Club that the operators themselves cannot guarantee their members' income and they even have a disclaimer for that. You will only earn your money back if one of the persons you sent letters to register to become a member and send you the corresponding membership fee. What if no one signed up because they're smarter and could smell a scam from a mile away?

The harsh truth here is only the operators of the Six Figure Stamp Club will earn money with this scheme. The post office (heck, even the paper and envelope supplier) has a greater chance of earning money than you do when you sign up for this.

Hopefully by now I've talked you out of joining Six Figure Stamp Club— there's basically a zero percent chance you make any real money. Or you'll make money, but you'll earn that money by duping somebody else.