Is Virtualmining.farm A Scam? Not Another Crypto Ponzi Scheme.. 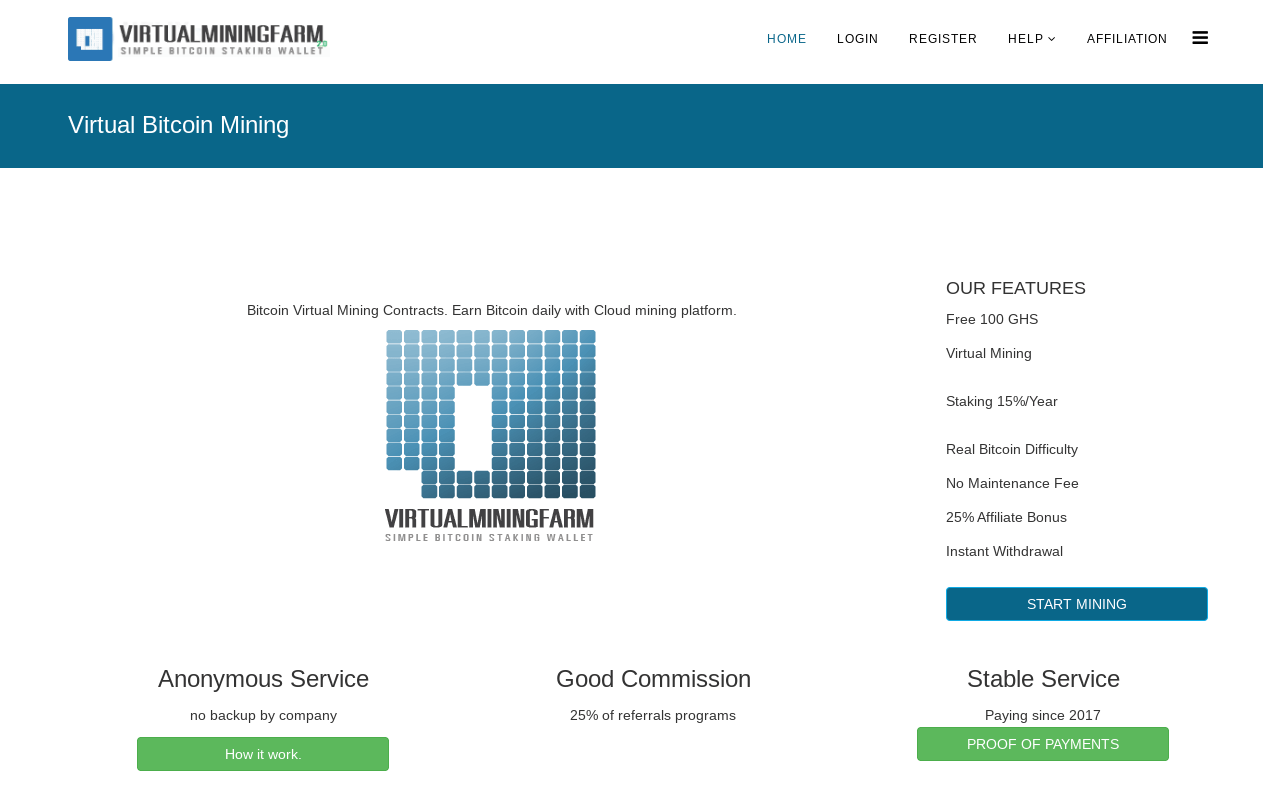 There's a lot of different crypto opportunities and many are just straight up scams.

Today we're going to be looking at Virtual Mining Farm to determine if it's legit or not (it's not).

You'll learn everything you need to know about this company including background information, a look at how you make money here and reasons why you shouldn't join.

Price to join: Need to invest Bitcoin to participate.

Summary: Virtual Mining Farm is a service that allows you to mine for crypto without having any hardware.

Basically you invest Bitcoin with the hope of getting daily returns. The problem here is the program isn't paying people out and there's likely no mining going on.

They use the Bitcoin you invest to pay out people that joined before you. This is known as a ponzi scheme and is a complete scam.

Better opportunity: If you're looking to make money online legitimately, click the button below. There you will see how I make 6 figures online.

There's no proof, however, any mining is happening and I'd say there's 100% chance there isn't mining going on.

2) How do you make money here? There's two ways to make money here. The first I just explained and that's investing Bitcoin to get more Bitcoin in return (not going to actually happen).

The second is honestly the more profitable way but it would require you to unethically recruit people into Virtual Mining Farm.

3) Are there any red flags? I'll go over every red flag more in depth but everything about this company is a red flag. You don't know who the owner is, there's proof whoever does runs this company is running other similar scams, it's a ponzi scheme and more.

The Owner Is Unknown

I review these kinds of make money online opportunities all the time - I've done hundreds in the last couple of years.

Every scam is both unique in its own way but they also all share common traits.

One of the biggest red flags you can have with a company like this is when the owner is never mentioned.

Some scams will have a fake owner but Virtual Mining Farm doesn't even go that far.

They just straight up don't even say who runs this company. This usually means the people behind the opportunity are serial scammers and have other scams going.

This is true for Virtual Mining Farm.

Part Of A Larger Scam Network

I don't know who runs Virtual Mining Farm but I do know that whoever runs it runs other scams as well.

There's an almost identical scam being run in Thailand called Crypto Mining Farm which looks like the following: 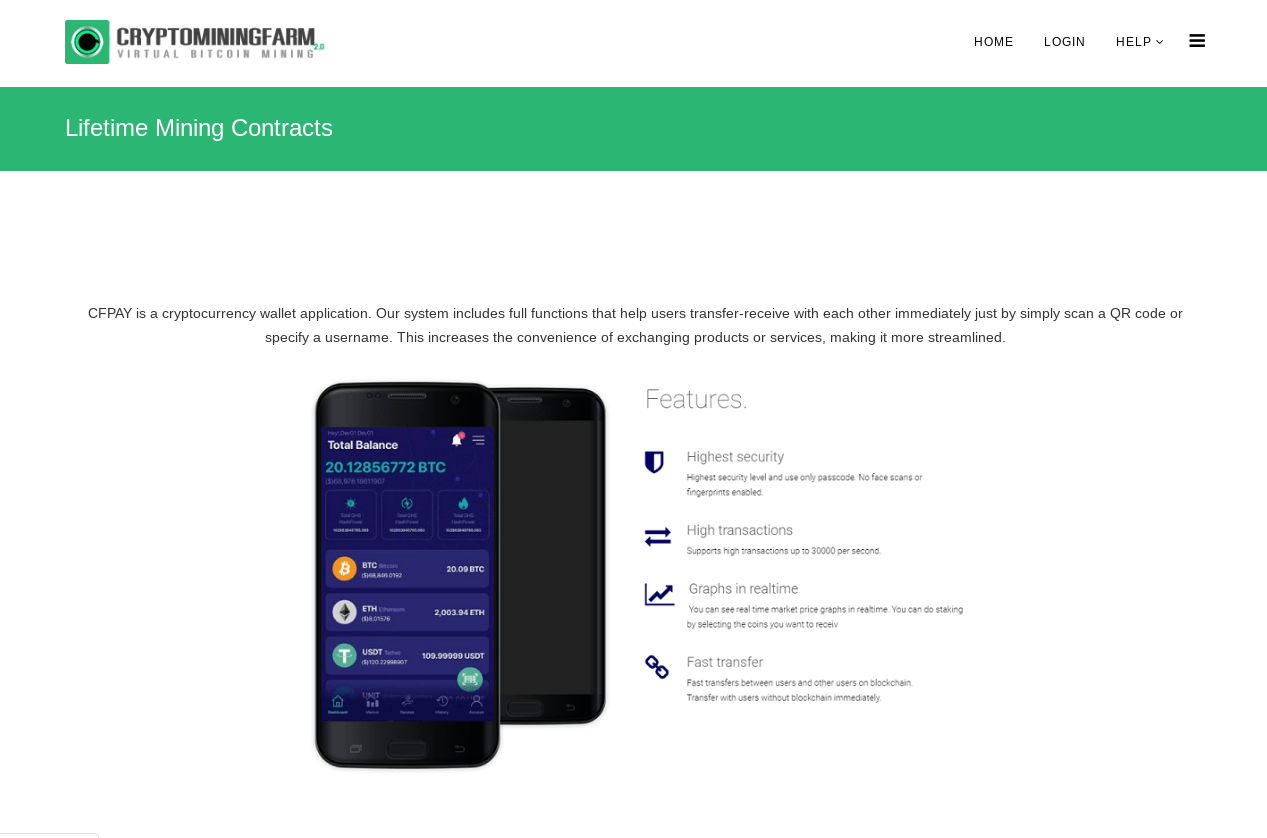 This site has the exact same format as Virtual Mining Farm except there's a difference in color. Obviously the names of the companies are basically the same as well.

A ponzi scheme is when new investment is the only source of revenue and a company is lying about how the company makes money.

Virtual Mining Farm claims they get your returns through crypto mining but there's no proof of this.

What is happening is they take the Bitcoin you invest and just give it to the people who invested before you.

These people are under the belief that the Bitcoin came from mining and gives them confidence to pay out more.

Ponzi schemes never last, however, and are guaranteed to fail. Eventually new investment slows down and there's not enough money to pay everyone out.

When this happens Virtual Mining Farm stops paying people out which is what is happening now.

Additionally, this comapny is a pyramid scheme which looks like the following:

A pyramid scheme is when recruitment is the only way to make money. You can recruit people into the system but you can't sell any service independent of recruiting.

When recruitment slows down so do payments. Eventually this prompts a collapse and most people lose their money.

The compensation plan here is based around recruiting and building a downline.

It pays out in a unilevel structure and looks like the following: 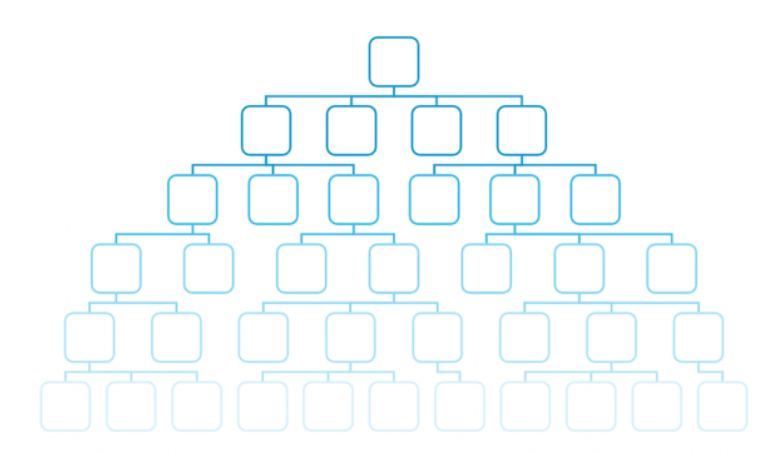 Basically you earn money from every person who invests Bitcoin that you recruit and your recruit's recruit.

You can earn down 30 levels below you.

Since this is a passive income opportunity it's known as a security.

In most countries there are laws to offering a security and you have to register with certain authorities to be legal.

According to Alexa the main countries this company targets is Venezuela, Mexico and Columbia.

Nowhere does Virtual Mining Farm say they are properly registered in any of these countries.

This means this company is committing securities fraud and you may get in trouble promoting it.

Virtual Mining Farm is likely scamming millions from people and it could one day face a big lawsuit.

You don't want to get swept into this because you were promoting them.

is Virtual Mining Farm A Scam?

Virtual Mining Farm is the definition of a scam and there isn't a single legitimate thing about it.

It's clear this is part of a wide, global scam and the people who run it are serial scammers.

They're connected to an identical scam that targets Thailand and scammed millions from unsuspecting victims already.

That's the only thing that's going on here.

They're trying to get people to invest Bitcoin and promising returns that'll never come.

If they do payback anything it'll only be for a short time until new investment slows down.

When that happens payouts stop and the entire scheme comes crashing down. Most people lose their money when this happens and it's almost impossible to get your losses back.

Stay away from Virtual Mining Farm!

Hopefully by now you've decided Virtual Mining Farm is a scam and you don't want to be involved.

If that's the case and you're still interested in making money online, you should check out Wealthy Affiliate.

Wealthy Affiliate is the single best place to learn how to make money online and it's where I learned how to make over $100,000 on the internet.