Overview: Million Dollar Replicator is a complete scam and uses very well known scam techniques. For instance, they pay actors to do testimonials and the owner uses a fake identity so his true identity never gets revealed. I’ll reveal all the tricks later on in the review.

There are legit ways to make money online, however, and the best way to learn is at Wealthy Affiliate. This is where I learned how to make a full time income online and you get world class training and a community of over 1 million affiliate marketers to help you out – plus you get all the tools to help you succeed.

To read my full Wealthy Affiliate review, click below:

The Owner Is Fake

One thing you’ll see that’s very common with scam courses is the owner fakes his identity. The reason a person would do this is, is they sell multiple scam courses and know the gig would be up if their real identity got out.

People would see the owner and immediately just say to themselves “Oh this guy! Obviously this course is a scam.”

So how do I know the owner is faking his identity? He doesn’t really try hard to hide this fact.

Here’s the photo from the course: 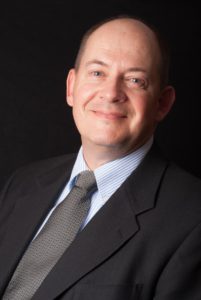 There’s reverse image tools that allow you to upload a photo and you can see where else the photo shows up. This photo shows up in every stock photo website imaginable.

For instance here it is at Pixabay:

This image is one that comes up when you type in “business man” or “corporate” in Pixabay.

If you’re someone that’s proud of the work you do and know your training is legit, you wouldn’t hide who you are. Million Dollar Replicator isn’t the only course that does this either. Here’s a course that does the same thing – that course is a scam too.

So this is red flag number one (unfortunately it’s not the last).

They Pay For Fake Testimonials

So we’ve already established the owner of this course is fake and is dishonest.

But what about the people that claim to be making ridiculous sums of money per month because of this course? Would it surprise you if I told you they were fake too?

This is another very, very, very common scam technique and every time I see an owner fake his/her identity, you always end up seeing fake testimony.

There’s a website called Fiverr and you can pretty much find someone to do any online job that you want. A very common job offer is people willing to create a fictitious testimonial for you.

Here’s the testimonials from the course:

All these people are supposedly making a TON of money using this course (like over a million a year).

Here’s their profiles on Fiverr specifically stating they’ll make a testimonial for your business:

I review courses everyday. I see the same tricks everyday. It sucks because there’s so many opportunities to make honest money online and courses like this tarnish the overall reputation of internet marketing. I make more money online now than I have at any other point in my life and yet I’m almost embarrassed to tell people what I do.

Many people just assume I’m a scammer or doing something unethical. Million Dollar Replicator and other courses like this are a major part of why people assume these things.

This is red flag number two.

Let me be clear about one thing: It is definitely possible for someone to make that type of money online. Its highly unlikely and the odds aren’t in your favor but again it’s possible. I’m actually friends with some people that do make that much (I’m not quite there yet).

But whenever you see someone claiming you can make absurd amounts of money with little to no effort, know that you’re being scammed.

There is absolutely no way anyone is making the type of money claimed in this course just from taking this course. I’d bet my life on it.

The only person that’s making money here is the owner of the course (whoever that may be).

Getting To The Course Is A Nightmare

After you buy the course you predictably get sent to a second sales page where there’s upsells. I don’t have a problem with upsells if they actually add real value and it’s a pretty common thing for courses to do.

BUT I couldn’t get out of the sales page and access what I just bought. There’s a small text at the bottom that reads “I don’t want to upgrade, take me to the membership area.”

Instead of just bringing me to the course it sent me to Paypal with an impending $150 charge. They’re basically trying to trick people into upgrading even when they click not to.

I’ve actually never seen that before. This may be more dishonest then having fake testimonials!

So to get to the course I had to email Clickbank (where I bought the course) and then chat with them for about 15 minutes. They then reached out to Million Dollar Replicator for me and about 6 hours later I received a link from them with access to the course.

In order to sign into the course you have to give your name and email address to create a password. This is understandable and basically all courses (scam and non-scam) require this.

But Million Dollar Replicator also requires you to put in your phone number: 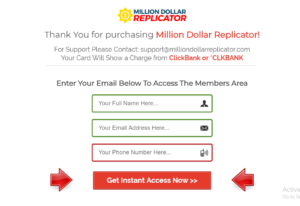 If someone was willing to lie about who they are, fake testimonials and try to trick you into buying a $150 upgrade, would you trust them with you number? NO WAY.

In order to get to the course I just put in a fake number and it was accepted. I finally got to the training and it was basically what I expected – very generic.

The Course Is Low Quality

After a day of trying to get to the actual training I finally got there. After you scroll down past multiple attempts to sell you more stuff this is what you see:

You get 8 weeks of supposed training. The person who created this course never bothered to label what you’ll be learning in each course (for example most places will put “week 1: niche selection” “week 2: selecting products to advertise”) and the videos inside each week are not labeled either.

If you’re a beginner, this would be a horrible way to learn. You need an outline and there’s core concepts that you have to understand or else you’re doomed for failure.

There’s nothing new in this training or anything like that, either. It’s all just broad advice that you could easily find online for free. There’s no real life examples and you certainly never get to see evidence this system works.

The reason for this? It doesn’t work. You absolutely won’t have the information or training to succeed if you take this course.

My advice is to save your money and avoid the headaches of purchasing Million Dollar Replicator – it’s just not worth it.

I’ll say it one more time so you’re not confused about what I’m saying: Million Dollar Replicator is a scam. If you buy this course you won’t learn how to make money online – you’ll just be losing $40.

It has all the signs of a scam from the fake owner, to the fake testimonials and the fake money claims. The training is just terrible as well.

There is good news, however, and there’s plenty of ways to make real money online. I learned from the best place on earth, Wealthy Affiliate. It’s by far the top place for affiliate and internet markers and gives you everything you need to succeed online.

To see how it stacks up against Million Dollar Replicator, click below:

As you can see it’s a no brainer which one is the better course. Plus you can try Wealthy Affiliate for free to see if you like it!