Multiple endorsements. An Instagram-worthy house by the beach. A shiny new sports car.

That is the life of a successful influencer, and you want to join their ranks. But where do you start, right?

In this Paid 4 Clout review, we're going to go deeper and delver into what this website really is and if there's any truth to their claims that you're going to earn a lot of money when you join the site.

Summary: Paid 4 Clout markets itself as an influencer network, but it really is nothing more than a get-paid-to site with a good website. You can earn a little cash by referring other people to the website, as well as carrying out different tasks via the website. The pay is higher than most GPT sites, so it seems more enticing. But in this Paid 4 Clout review, we're going to take a look at why this is not the right opportunity for you.

What Is The Paid 4 Clout?

Paid 4 Clout (also known as Clout Pay) claims that it is the number one "influencer" network right now. Influencers who join the website can earn as much as $10 to $15 for every person they invite to the platform.

According to its About page, Paid 4 Clout was established as far back as 2015. The year, however, doesn't add up when you perform a Whois lookup. According to this page, Paid4Clout.com was only created on July 11, 2019. That's red flag number one.

But how does it work? Simply join Paid 4 Clout to make money using social media. You need to invite your friends to the Paid 4 Clout website by sharing a referral link. In this case, Paid 4 Clout made it fancier by referring to it as the "influencer" link.

You'll get $10 for every friend you refer to the website. According to the Paid 4 Clout website, the money used as a reward for so-called influencers are pulled from ad and sponsorship revenue.

The more site visitors the Paid 4 Clout website has, the bigger the audience's exposure to its sponsors' products. But if you don't want to refer your friends to the website, you can earn money by testing some of the products offered by Paid 4 Clout's sponsors. This is nothing more than a shady hybrid of an affiliate program and a get-paid-to site.

The rewards you accumulate will be sent to you once you have accumulated enough points. You have the option to receive your reward via Bitcoin, Cash App, and PayPal. If you'd rather go old school, you can always request for your payment to be sent by check. According to Paid 4 Clout, the payments are usually sent instantly.

"Influencers" must be 13 years old and above to be eligible to join this website. The problem is you need to be 18 years old to be able to use PayPal and Cash app. There are also some restrictions on Bitcoin usage if you are below 18. It can also be tricky to cash a check if you are under 18. It is obvious that Paid 4 Clout creators didn't think this through when they set the age at 13.

How much money are you going to make with Paid 4 Clout? That depends entirely on the amount of time and effort you set aside for sharing the "influencer" links. To give you an idea of how much you're going to earn, Paid 4 Clout has set up a handy calculator on its website.

Keep in mind, however, that these earnings are all hypothetical.

Other Things You Need to Know About The Paid 4 Clout

​
It has a neat dashboard

The members' dashboard area is organized and great to look at. It also gives you a sense of deja vu because it looks like the dashboards of other GPT sites.

You can edit your profile and payment information here. In the account overview section, you can see the referral or "influencer" link. You can also keep tabs of the number of clicks and referrals you already have. This is where you can find info on the tasks you have done, as well as your earnings.

You'll see the leaderboard at the bottom of the page. One Paid 4 Clout member has allegedly earned $3 million just by referring people to the website and doing some mundane tasks. The rest have allegedly earned more than $2 million. (Who the hell earns $3 million just by referring other people to a GPT website? This is so unbelievable it's laughable.) 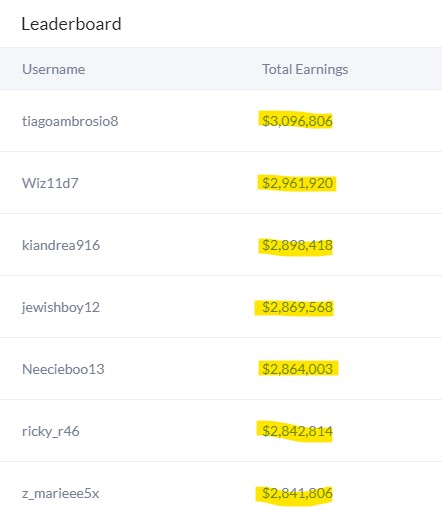 You will also see the Task Wall on the dashboard. If you want to promote Paid 4 Clout on Facebook or your website, just check out the Promotional Posts section to choose a banner that you can screenshot and paste.

Another way to promote Paid 4 Clout is by producing a YouTube video and submitting it to the website for consideration. Here you'll discover that Paid 4 Clout is marketed towards teens (who, the makers of the website presume, don't know any better).

As mentioned, you can receive your payment via PayPal, Cash App, and Bitcoin. You can also receive it via a mailed check. Make sure, however, that you're already 18 years old before creating an account. You don't want to spend your days sharing Paid 4 Clout only for you not to get your reward because of technicality.

How Much Does The Paid 4 Clout Cost?

​
Paid 4 Clout is 100% free. Just register online to join Paid 4 Clout. The company promises that you'll be paid a $25 sign up bonus upfront.

How Else Can You Make Money with Paid 4 Clout?

​
Apart from the $25 you're going to receive after signing up, you will also earn $2 each time someone clicks the "influencer" link you shared. You will also receive $10 to $15 for every person who signs up on the Paid 4 Clout website via your link.

You can make as much as $25 for every survey you take, and another $10 for downloading mobile apps. Create a YouTube video reviewing Paid 4 Clout and get $50 for each approved video.

Paid 4 Clout's website and members' dashboard is super easy to navigate. Each topic is sectioned neatly, and looking for any information you need will not be a hassle.

One of the most disappointing things about Paid 4 Clout is the blatant lies it has published on its website. In its About page, it says that it has been around since 2015. But upon checking a Whois website, you'll see that it was only created in mid-2019. Apparently, the creators of this website can't keep their stories straight.

You can also check the earnings of the Paid 4 Clout members on the leaderboard. Their earnings are outrageously high that they are unbelievable. The leader, for example, earned more than $3 million, while the rest earned more than $2 million.

It is virtually impossible to earn that kind of money just by referring others to the website. You know the adage: if it's too good to be true, it probably is.

It also claims that it works with brands such as Fortnite, McDonalds, Target, and Wendy's. The problem is it's easy to make these claims, but it can be so hard for users to verify them.

Take a look at the pictures below.

These pictures can be found on the Paid 4 Clout website. Underneath these photos are the names of influencers who have given positive testimonials about the website.

But it's possible that these images were stolen from social media websites without the owners' explicit permission. Simply do a reverse image search of these photos to see that they were also used on other websites.

You're fooling yourself if you think you're an "influencer"

This term "influencer" has been overused that it has now lost its meaning. The truth is only a few people on earth can be truly called an "influencer," and they are mostly celebrities.

Having a Facebook account with a few followers doesn't mean you're an influencer. As an ordinary person, you don't have clout. You're only spamming social media sites to get your followers to sign up with Paid 4 Clout.

Is The Paid 4 Clout A Scam?

​
Yes, Paid 4 Clout is a scam. If you were very excited to earn some extra cash to pay for next week's groceries or that shiny new sports car, then I'm sorry to burst your bubble.

Paid 4 Clout is nothing but a get-paid-to website that promises to pay outrageously large amounts of money to so-called influencers. But there are so many in its story that it is safe to conclude that this website is just another waste of time.