Surveys2Cash is a website that compiles and recommends different surveys for you to take..

If you want to join you're probably wondering if this site is a scam or legit.

Below you'll find everything about Surveys2Cash including background information, how to join, how you make money and more.

You'll know if this survey site is right for you by the time you're done. 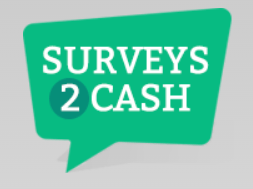 Summary: Surveys2Cash doesn't actually provide surveys for you to do and instead just recommends different well known surveys sites.

It's kind of pointless to be honest because they recommend surveys that are already well known and easy to find.

A lot of the sites they promote pay to get promoted as well. So you're not necessarily getting the best surveys and just getting the ones who paid Surbeys2Cash.

Also, it's clear Surveys2Cash exists just to get your information just to market to you later on.

Better opportunity: If you want to make serious money online (enough to work full time from home) click the button below. There you'll see where I learned how to make 6 figures on the internet.

1) What is Surveys2Cash? Surveys2Cash is not a site that actually provides survey sites. Instead they just compile surveys and promote surveys.

2) Who are the owners? There's no information on who the owners are which is a red flag.

4) How many members are there? This information is not shared.

5) Where is the main source of traffic? Most of the people who visit this site come from America: 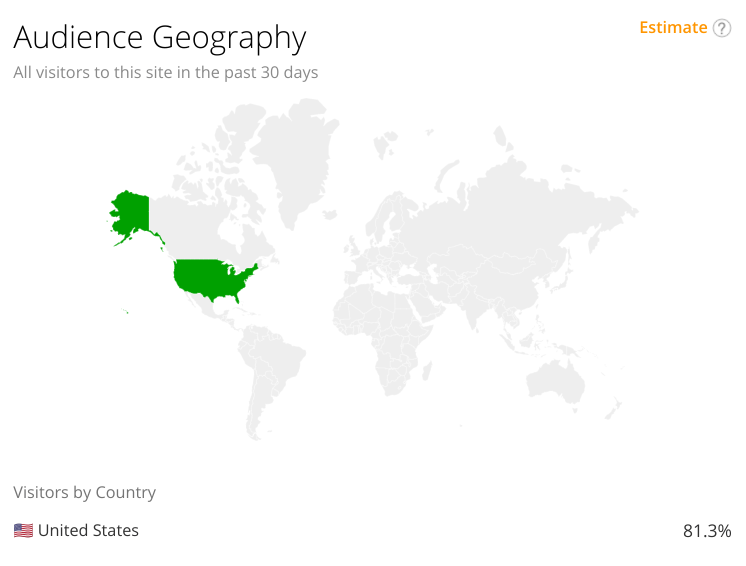 Here's the steps involved with getting started.

First you have to sign up with the form below: 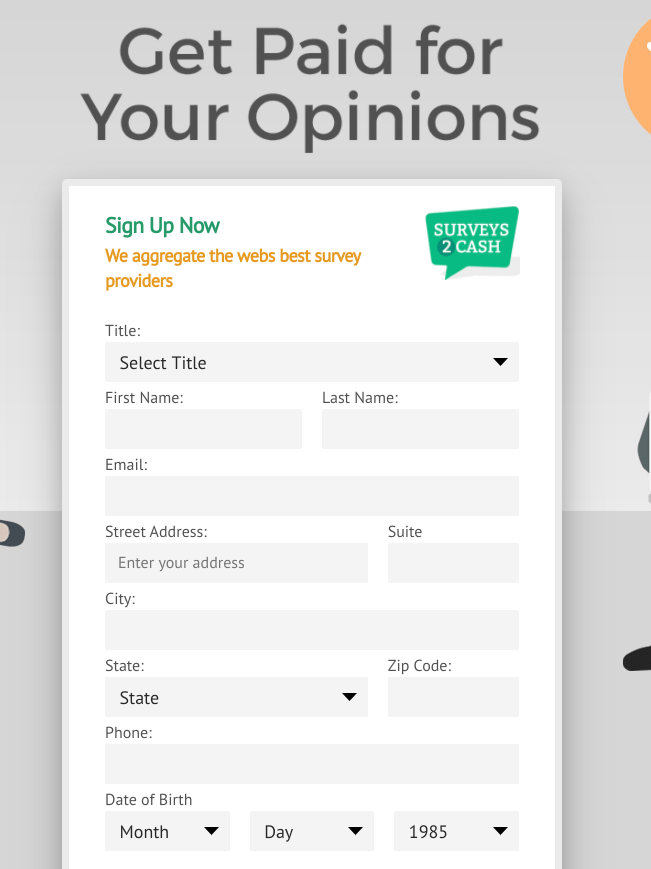 This is basic information you have to put down which includes your name, email, address and phone number.

I really, really don't like that you have to put your phone number, though. Look at the fine print under the form up top to understand why:

This means you're going to get texts and phone calls about promotions from Surveys2Cash.

This to me is why this website exists. It's basically just trying to get your phone number so they can sell access to it.

Apparently you can text "STOP" to stop texts and calls but you never know if that will actually work.

Honestly, this one aspect should turn you completely off from Surveys2Cash. It's not worth giving away your phone number.

After you put in that information you're brought to a page full of sponsored offers: 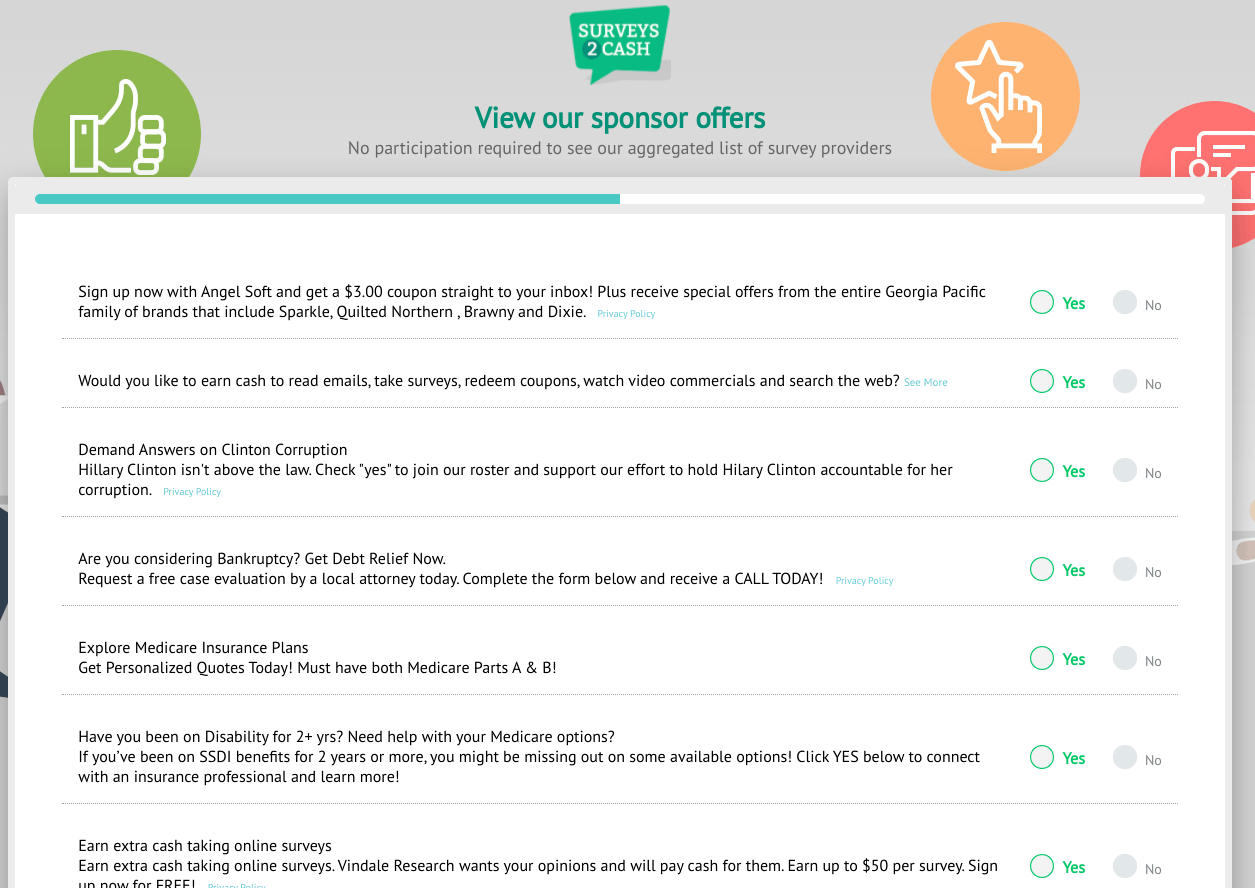 You don't have to participate in any of these offers and can just skip to the next page if you want.

Then you have to shift through even more partner offers.. 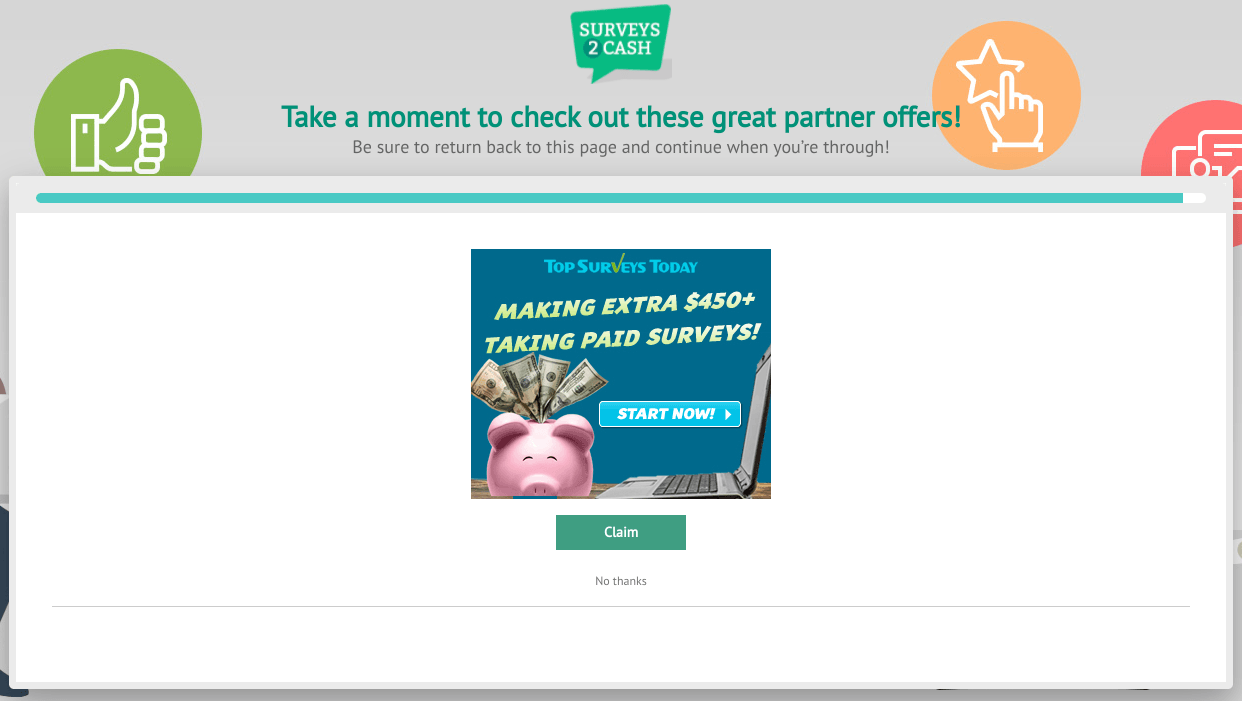 After going through a bunch of these ads you're brought to the page where you get your surveys: 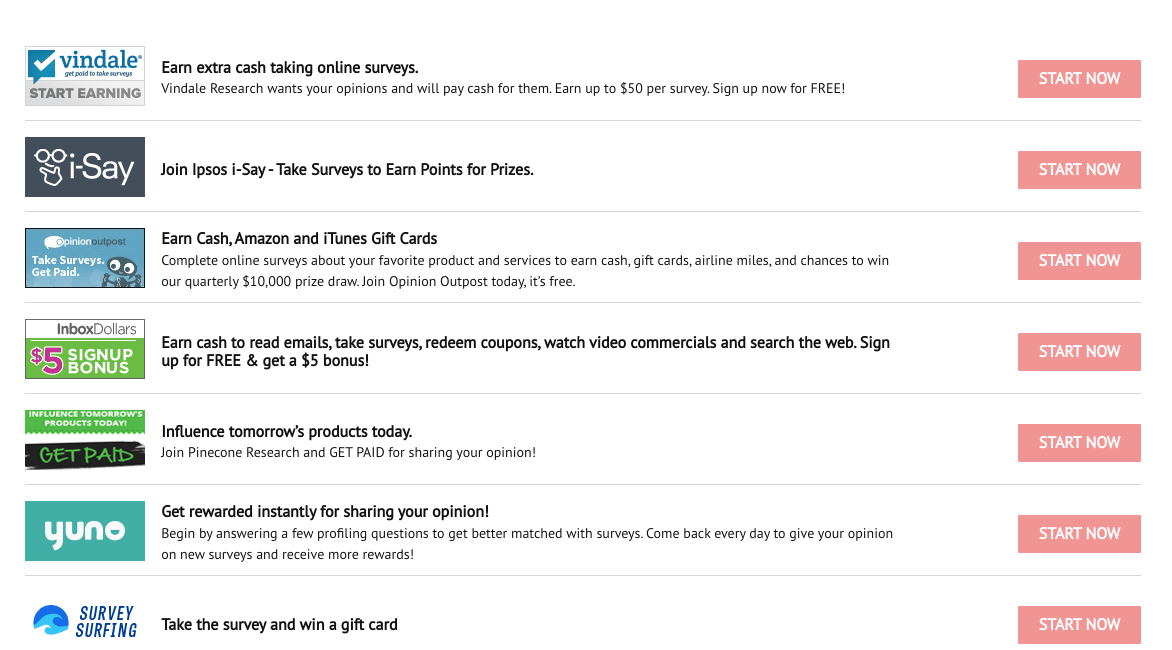 A lot of surveys are well known and you wouldn't need a place like Surveys2Cash to find them.

Just type in "best survey sites" into Google and there will be plenty of sites that don't require your phone number recommending them.

The Surveys Are Mixed In Quality

Overall the quality of the surveys are just average and less than average.

The surveys I got recommended are:

None of these surveys are what I would consider "the best." For example, most people consider Swagbucks, PrizeRebel, PointClub, LifePoints and surveys like these to be the most legit.

Vindale and Inboxdollars are decent but they're nowhere near the top ones. The rest again are just middle of the pack survey sites.

I don't think this website is worth your time but it is free to try.

So if you decide to give it a try there's really no risk.

Doesn't say who owns the site

I've been reviewing make money from home opportunities for a while and have reviewed hundreds of websites/companies.

Anytime you see a website that isn't upfront about who owns it is a major red flag.

I don't know what it mean in this case but it's usually not good.

But they don't. Instead you sign up, go through a bunch of promoted offers and just get a small list of well known survey sites.

You can easily find these sites just by searching for good (or bad) survey sites.

Surveys they recommend are average

The websites that show up at the end are most likely paying to be there because there's much better survey sites than the ones they recommend.

Anyone who understands online surveys know which are the best and none of them are here.

My guess is this site exists solely as a marketing platform. Meaning they get leads and numbers for ad survey sites and other promotions. They then pay to have access to that information.

When you give away your number they ask you to check a box so they can send you text messages and calls with promotions.

I don't know if I'd call it a scam but it's not worth your time.

You're not getting a unique money making opportunity here or even unique surveys that you couldn't find anywhere else.

All you're doing is giving your information away to get access to a list of surveys that you can easily find on your own.

They survey sites aren't secrets or anything like that.

Just search on Google for survey sites and you'll find them (and better ones).

Also, taking surveys for money is one of the worst ways to make extra income. You're literally going to be working for pennies and it's never worth the effort.

Hopefully by now you see Surveys2Cash for what it is.

If you're looking for a legitimate way to make money online, check out Wealthy Affiliate.

Wealthy Affiliate is the single best place to learn how to make money from home and on the internet.

When I joined a couple years ago I had zero money and no experience. Now I make 6 figures online and work full time from home.