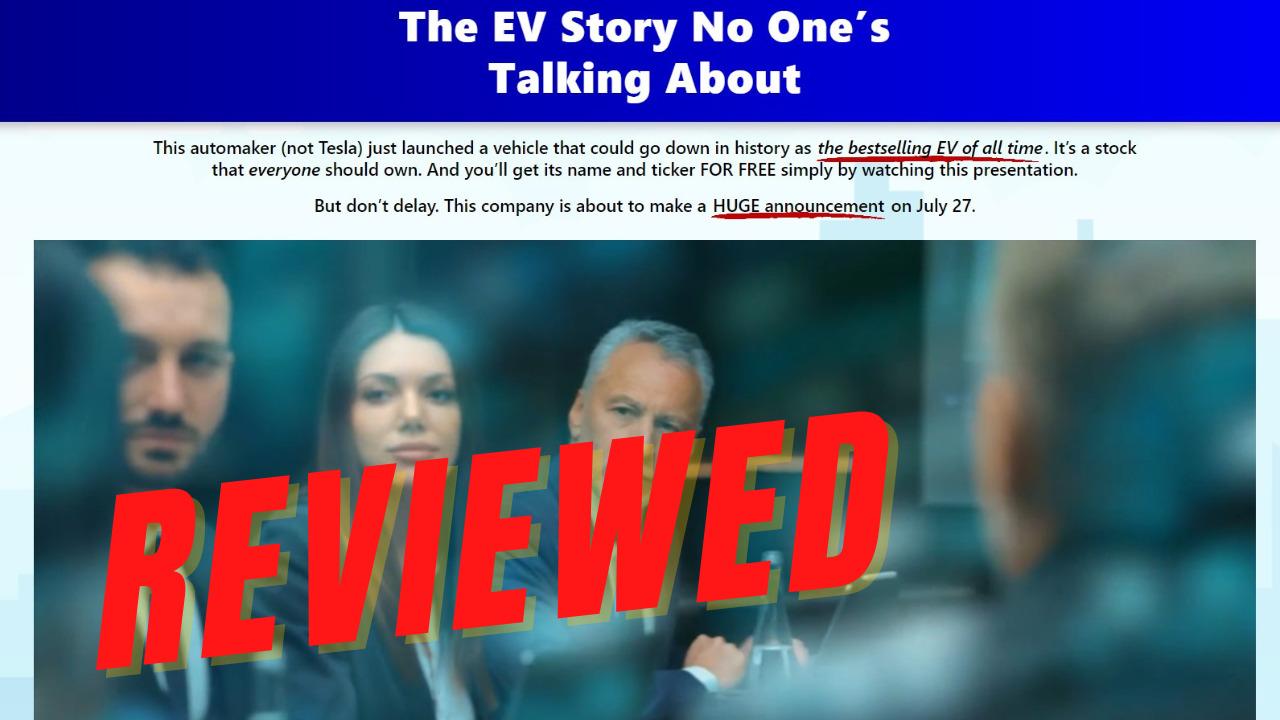 Empire Stock Investor is out with a new presentation hyping up what they call "The #1 EV Stock Of 2022."

It's run by Enrique Abeyta.

They're promising you a chance to 3X your money if you invest..

They won't give you the stock unless you buy the Empire Stock Investor.

The good news is I was able to figure out the name of the stock!

Below I reveal this stock and give you information so you can determine if it's worth investing in or not. 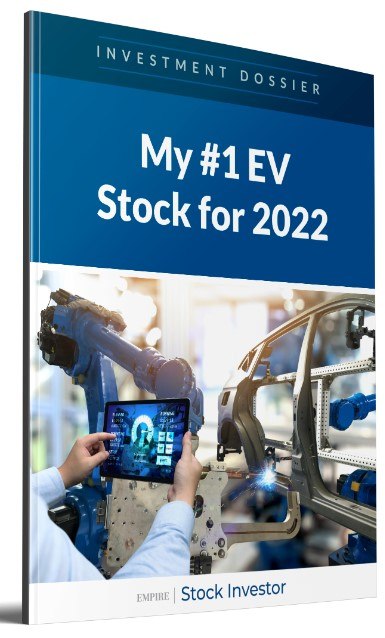 Summary: Ford is the stock being teased here.

They're launching a bunch of EV cars in the future and their electric Ford 150 is popular.

The second investment being teased is a lithium ETF.

Better opportunity: My favorite investing newsletter beats the market by 3X.. to learn more, click below:

Empire Financial Research is out with another stock teaser for their flagship newsletter Empire Stock Investor.

They're calling a certain mystery company the #1 EV Stock Of 2022 and claiming this is an EV story "no one's talking about."

Further Enrique Abeyta, the author of this presentation, claims this mystery company (which is not Tesla) just "launched a vehicle that could go down in history as the best selling EV of all time."

In the beginning of the teaser Enrique sets the stage for why you should invest in this mystery company.

He claims something called the "Master Reset" is coming and it's going to be profitable to whoever invests in it: 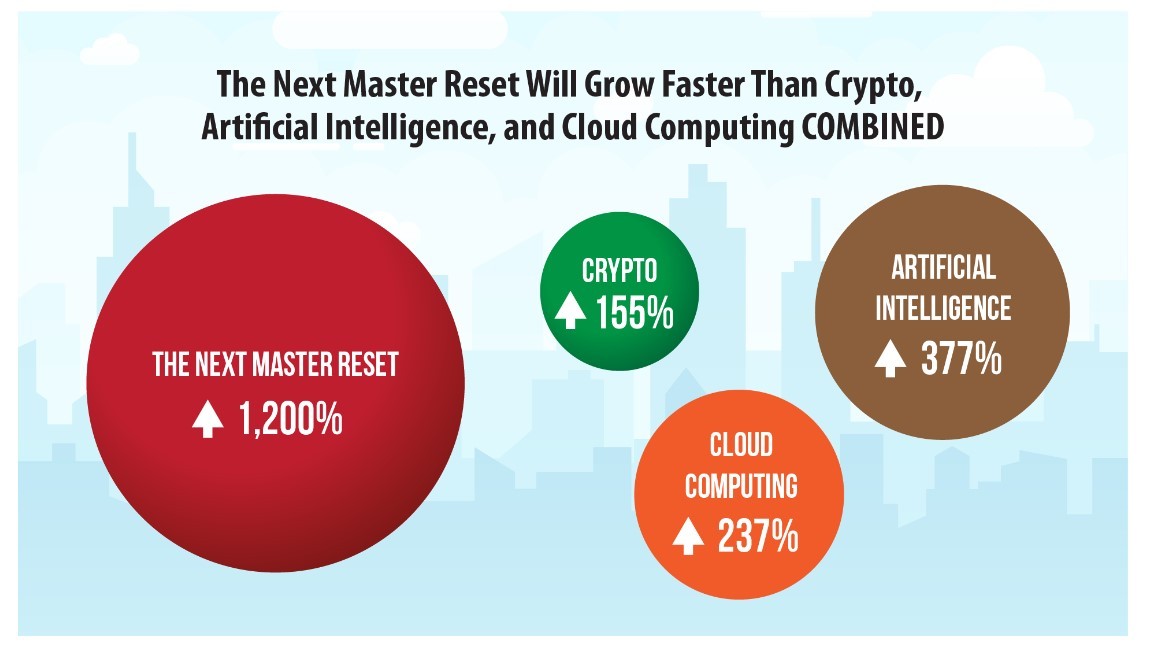 So what's he talking about?

He's talking about the the auto industry switching to electric cars from gas cars.

Enrique believes the EV market is going to grow by 133% every year and he believes an unexpected" automaker will outsell Tesla and all other EV makers.

Next, Enrique gives a hint about the company he teases.

He claims the company he's teasing is making a "historic business move that could take its shares even higher."

Enrique then drops these quotes without naming what this business move is: 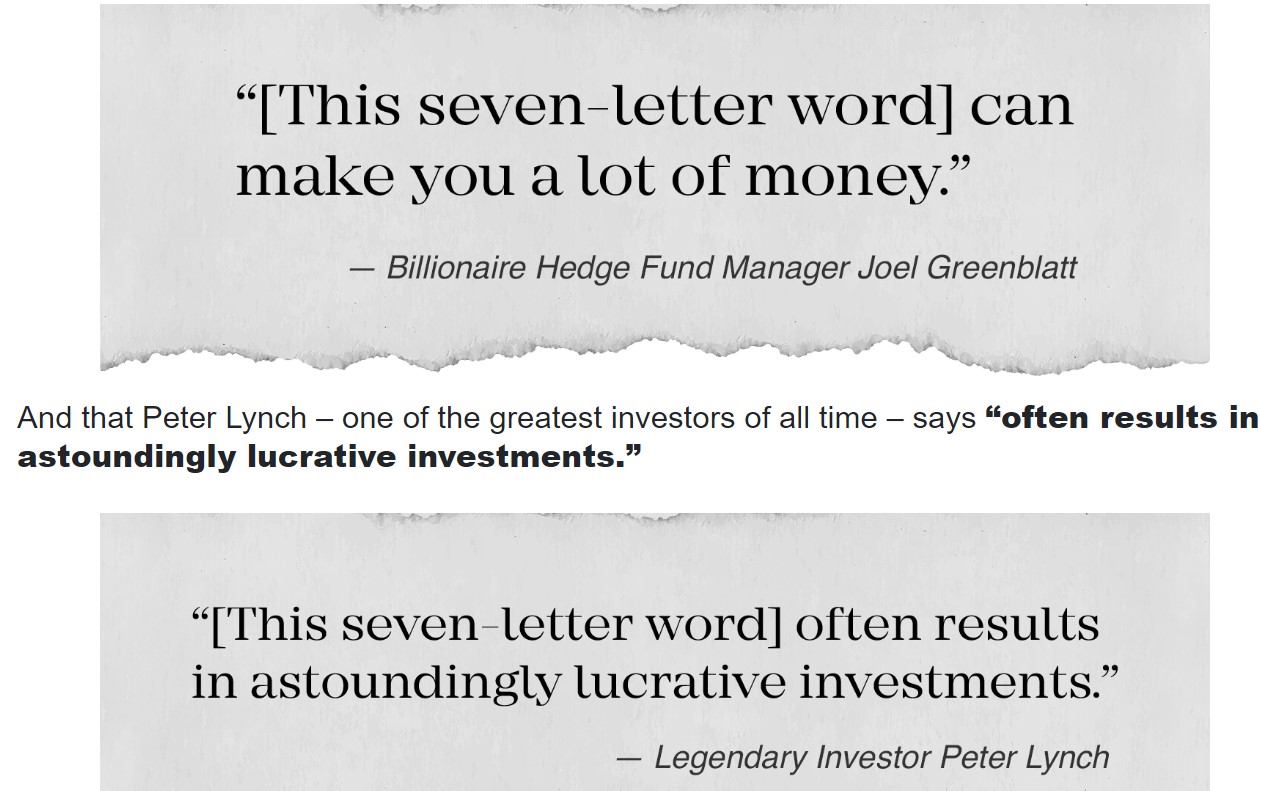 I was able to find what this "seven letter word" is and it's spinoff.

Here's a quote from Peter Lynch about what makes a perfect stock:

A spinoff is when a company create a new company by selling or distributing new shares of its existing business.

This happens when a company expects the spinoff to be worth more if it's independent.

So our first clue is this company Enrique is pitching is a spinoff.

After dropping this hint Enrique starts hyping up his own stock picking abilities and gets into some good old fashioned fear mongering.

He talks about the problems the Russia/Ukraine war is causing, the issues of inflation and raising interest rates and more.

Enrique even hints at the coming recession..

However, according to Enrique you can save yourself from all of these issues starting July 27th if you just invest in his mystery company.

Next, Enrique goes back into his "Master Reset" spiel and talks about 90's tech and Amazon's disruption of retail.

He talks about other companies that were left behind during this time.

Then he transitions into the the "Master Reset" happening in the auto industry.

Enrique shares a graph of how much automakers are spending on EV investments: 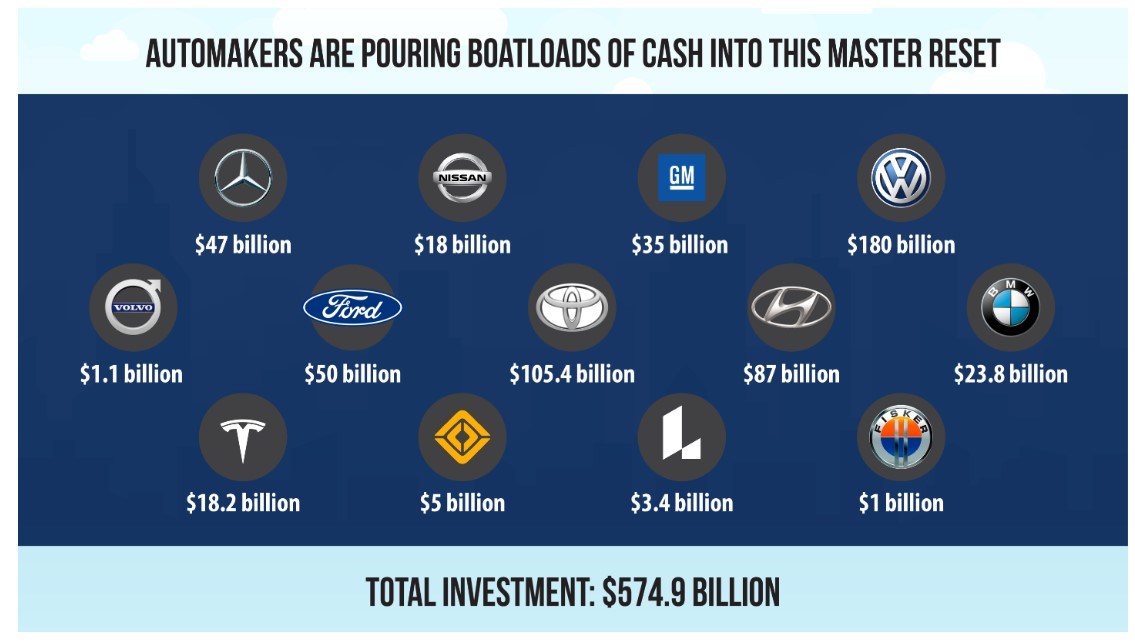 Next, Enrique starts spreading the Gospel of EV and why it's going to overtake gas vehicles.

He claims they'll save $38,000 in their lifetime if you combine fuel savings and maintenance costs.

Next, he talks about electric cars serving as backup generators and making outages less harmful.

If you lose power you can apparently run your house off your electric car battery for a day (you could just buy a $4000 generator but that's an argument for another time).

It's here where Enrique drops the hint that helped me figure out what he's teasing.

He mentions an article from Drive that mentions this car but censors the name of the car:

I was able to find this article and the car being talked about.

The name of the car is..

Ford and their electric Ford-150:

Just to be sure let's look at the previous hints in the presentation.

First, Enrique claims his #1 EV Stock For 2022 is engaged in a spinoff and there's many rumors of this happening to Ford.

Next, the July 27th is mentioned as an important date for the mystery company.

On July 27th Ford will be announcing their second quarter earning.

Additionally, at the end of the presentation Enrique makes a pitch for you to invest in "white gold."

He has a report titled "The Best Way To Own White Gold" and he's hinting at lithium,

However, he's not talking about an individual company or stock and claims you can "own the entire lithium market with one trade."

This means he's talking about a lithium ETF.

I'm pretty sure he's hinting at Global X Lithium & Battery Tech ETF, which is the biggest and oldest lithium ETF.

So there you have it.

Whether or not you want to invest in these assets is completely up to you.

But you no longer have to buy the newsletter to learn what's being teased.

Now that you know the stock you can determine if you want to buy Empire Stock Investor without feeling pressured.

I actually wrote an entire review about this newsletter that you can read here.

Here's some frequently asked questions about this newsletter so you can determine if it's right for you:

1) Who Is Whitney Tilson?

He's a former hedge fund guy that had to retire from the industry for poor performance.

Tilson had been successful with his hedge fund for a number of years but couldn't beat the market in the last bull run.

As a result he's switched over to selling stock picks to individual investors.

2) Who I Enrique Abeyta?

Enrique Abeyta is one of the editors for Empire Stock Investor.

Is he a good stock picker?

Well he ran a teaser ad in May 2021 with the title "Most obvious 10X opportunity I've seen."

He was talking about Voyager Digital which is a Robinhood like product in the crypto world.

At the time the stock was around $16 and had peaked previously at $30.

Enrique said he loved it at this price.

So what happened to the stock?

It crashed and the company went bankrupt LOL! 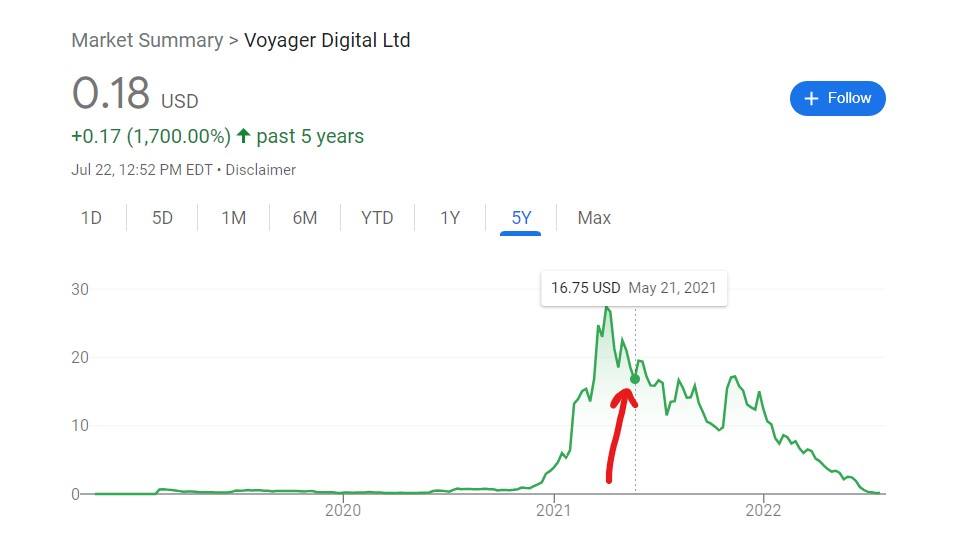 Obviously not all of Enrique's picks will be this bad and I'm sure he's made some good ones in the past.

But you should never take the hype from stock pickers that seriously.

The most obvious 10X opportunity turned into a massive catastrophe and the company doesn't exist a year later.

3) What Does Empire Stock Investor Cost?

There's three different price points for this newsletter and they are $49, 79 and $129 (all yearly costs).

The more you spend the more bonus reports you get.

This is basically what every publishers prices their introductory newsletter.

However, Whitney and Empire Financial Research wouldn't be making a lot of money selling $49 newsletters.

This product is more of a bait product to get you into the sales funnel.

Once you sign up you'll be promoted products that cost thousands of dollars.

That's where the real money is.

4) Should You Buy Empire Stock Investor?

Whitney had to close down his hedge fund because he wasn't beating the market.

The same thing is happening with this newsletter.

As a matter of fact most stocks I've looked at from Whitney aren't performing well.

For instance, he pitched a stock called Ginkgo Bilbo (which I covered here) as a hedge against inflation.

However, the stock has lost more than 25% since then.

Wilson recommended Meta in January 2022 and it lost about 40% right away.

In the same month he pitched Universal Music Group which is down as well.

He also recommended Nvidia at $292 and it's currently sitting at $170.

Whitney then said to investing in Ethereum which went on to lose 50% right away.

So 2022 has been a rough year for Whitney and he's been on a losing streak for more than a decade.

So that's the end of this article covering Empire Stock Investor's #1 EV Stock Of 2022.

The stock is Ford and they apparently have an earnings call on July 27th (along with a lot of other automakers).

In the end Enrique is trying to get you to buy Empire Stock Investor.

I personally would pass on this newsletter.

However, there are a lot of newsletters that are worth buying.

Stock Advisor has beaten the market by 3X the last 20 years and is very affordable.

Motley Fool's Stock Advisor is by far the best investing newsletter. To read my review of it, click below: