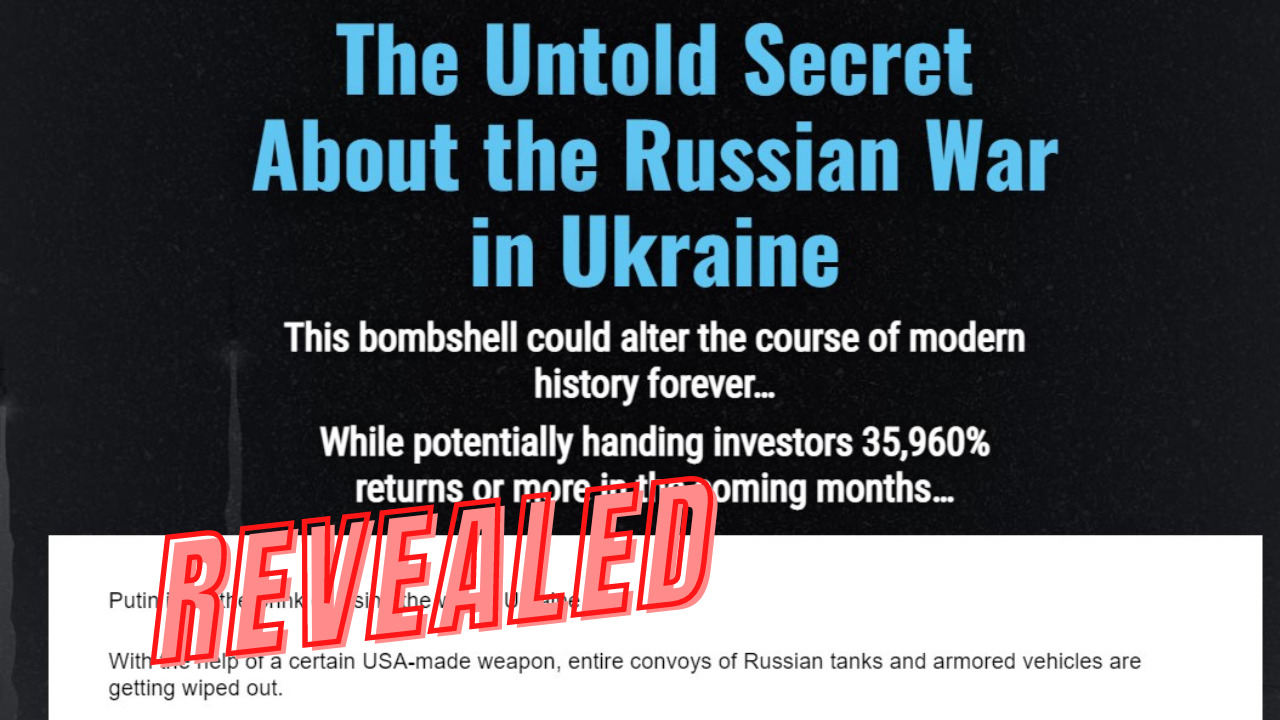 Jason Simpkins is back with a new stock teaser and he's calling it "Missile Millionaire."

Apparently Jason believes China has a secret new weapon that only a small California company can counter.

The problem? Simpkins won't reveal the name of the stock unless you buy his newsletter.

I have good news, though!

I was able to figure out the name of the company and reveal the stock below.

The company being pitched by Jason Simpkins is Aerojet Rocketdyne.

Additionally, they make rocket engines for a host of other products used by NASA and the defense department.

The company was bought by Lockheed Martin in 2020 but was denied for antitrust reasons.

So the company is back up for sale.

This is causing the stock to be higher than usual and it jumped from $42 to around $53 - speculators are betting on a premium buyout.

Overall a solid company that will be very busy over the next couple of years.

It focuses on America's military enemies and talks about ways we're out gunned by China.

Apparently they have a hypersonic missile that renders current air defenses obsolete.

However, there's one company that counter these new Chinese missiles according to Jason.

Let's look at the stock teaser now and break it down to figure out the stock.

Starts Off With A Little Fear Mongering

Apparently fear is a massive motivator because Jason relies on it heavily in this presentation.

It starts off with commentary on the current Russia/Ukraine conflict.

Jason talks about American weapons being used by Ukrainian forces and how they're driving the Ruskies back.

According to Jason it's American HIMRAS missiles that are wiping out Russian tanks and that Russia simply has no answer for it.

This conflict isn't actually the focus of the teaser.

At this point Jason pivots to China and claims they have a missile that can render American air defenses obsolete.

He's basically saying they'll do to America what Ukraine is doing to Russia.

Jason goes on further to say America will soon be confronting China and their new missiles because of Taiwan.

Jason claims China has always wanted to get its hands on Taiwan but the American Navy has made it impossible to do so.

These new weapons can change that (although America recognizes a "One China Policy" that reinforces the idea China controls Taiwan).

It's pretty silly to think America would be able to get out gunned in a military conflict.

America spends WAY more on our military than any other country.

In fact, America makes up 31% of the worlds military spending and we spend more on military than the next 9 top countries COMBINED.

Any advantage a country finds itself having will be quickly countered by America.

Jason believes one company in California is the key to America countering these new hypersonic missiles.

How does Jason arrive at this number?

Apparently General Dynamics grew 35,960% over the course of 30 years because of their Tomahawk missiles: 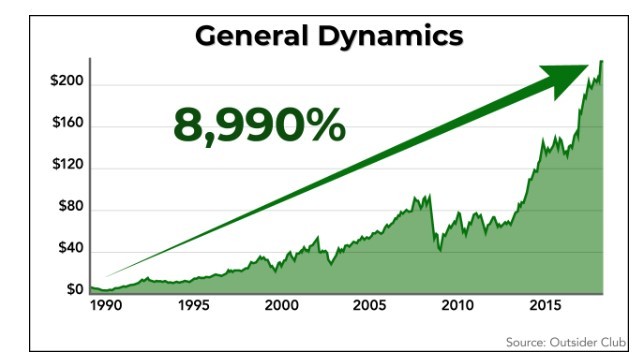 Obviously you can't just look at one company's gains and claim it's going to happen again.

So don't get carried away with your expectations.

Back to the company..

Apparently this mystery company is the key to defending against these smart missiles and big money has been investing heavily.

Putting The Clues Together

There's plenty of clues left in this presentation to figure out the name of the company.

All the clues point to Aerojet Rocketdyne being the company teased here.

Despite being called small by Simpkins Aerojet is a multi-billion dollar company that is the dominate rocket and missile engine maker in America.

Below you'll see an article straight from NASA explaining how Aerojet built the RS-25 Engine:

So this is clearly the company being pitched.

The question now is Aerojet worth investing in?

We'll answer that next.

What To Know About Aerojet Rocketdyne

Thinking about investing in Aerojet?

Here's some key facts abut the company that might help you decide if it's right for you:

Aerojet Up For Sale

This company has had an interesting history over the last decade or so.

About 10 years ago Aerojet and Rocketdyne merged to create the current form of this company - one that mainly focuses on rocket engines.

Lockheed Martin had bought this company back in 2020 but earlier in this year it was blocked on antitrust grounds.

This caused the stock to drop as people thought big defense mergers would be over.

But the company is putting itself on sale again and the stock shot back up into the 50's (where it was when Lockheed went to buy it).

Apparently rumors have GE and L3Harris as potential buyers.

Despite being sort of small for a defense contractor Aerojet serves a very important function - they're a major supplier of rocket engines for the government.

They supply engines for weapons like the stingray missile and engines for important rockets in NASA.

Their rocket engines have performed well in recent satellite launches as well.

Expensive At The Moment

The big problem with the current stock price for Aerojet is the impending sale is already baked into the price.

The stock dipped after the Lockheed Martin takeover was blocked down into the 30's.

But since the company is for sale again it went back to the 50's.

For this stock to be worth it a major bidding war would have to happen to drive the company past what Lockheed was going to pay - which was around $4 billion.

The problem is if Lockheed Martin can't get regulatory approval then none of the major defense contractors like Being, Northrop Grumman, Raytheon will be able to either.

This limits the amount of companies that can bid on Aerojet.

So it's up to you to decide now if this company is too expensive or will be getting 34,000% returns over the next decade!

The only question left now is whether you should buy Jason Simpkins' newsletter.

Is Wall Street's Proving Ground Worth It?

I did a full review of this newsletter earlier this year that you can read here.

If you don't feel like reading the entire review here are some FAQ's about the newsletter to help you determine if it's worth it or not.

1) What Is The Focus Of Wall Street's Proving Ground?

The main focus of this newsletter is to find companies that have to do with defense, defense technology and cybersecurity sectors.

Although they've branched out more recently.

This isn't the first teaser from Jason that I've covered.

Earlier this year I covered one of his teasers that promoted a company called Kopin.

Kopin is an augmented reality company that makes products for the military.

However, the stock hasn't done well this year and is down 66% so far.

2) How Much Does Wall Street's Proving Ground Cost?

This is a cheap newsletter and will cost around $49 for the first year.

However, this is known as a bait product.

The goal is to get you into the sales funnel so they can promote more expensive products to you down the road.

Jason has products that cost thousands of dollars and he'll be looking to sell them to you aggressively.

3) Are There Any Red Flags With This Newsletter?

This newsletter is owned by Agora.

Agora is one of the bigger financial newsletter distributors and they have a bad reputation.

For example, just last year Agora had to pay millions in fines for defrauding senior citizens.

You might think a company getting sued for defrauding elderly people would force some changes but it hasn't:

This personally wouldn't be who I'd want to give my money to.

4) Do You Recommend This Newsletter?

The stock picks are hot or miss and Agora has too much baggage to deal with.

The picks tend to be pretty volatile too and some lose big time, like Kopin.

So that's the end of my post detailing Missile Millionaire.

There's a lot of drama and big promises in this stock teaser.

Is America on a path to confront China and Russia militarily? Maybe.. the people in power always do seem to get their wars.

You can't just look at one example and claim Aerojet is going to follow the same path.

The company is strong but the stock is pretty expensive right now.

If you're going to buy at the moment you're banking on a bidding war to drive up the buyout.

Could happen but with major defense contractors seemingly kept out of the bidding it's hard to see it getting too high.

It's up to you if you want to invest in Aerojet but I'd pass on Wall Street's Proving Ground.

There's just too much baggage with the newsletter.

The good news is there's much better investing newsletters out there.