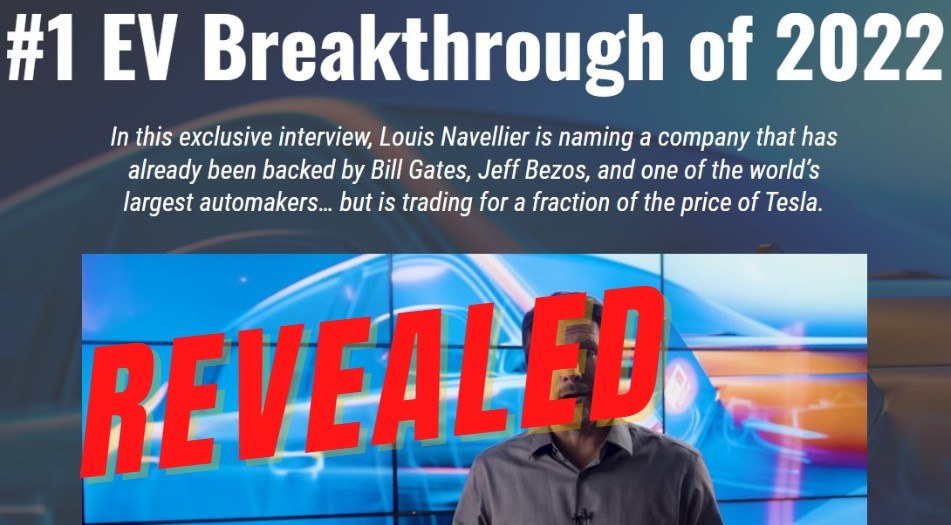 Louis Navellier is out with a new stock presentation and is hyping up we he calls the #1 EV Breakthrough of 2022.

He also claims to have some stocks you can invest in to capitalize on this new technology.

The problem is Louis won't reveal the name of the companies unless you buy his newsletter.

However, I was able to possible figure out some of the picks and reveal them in the video below:

Recommended: The Best Place To Get WINNING Stock Picks

Still have questions about this presentation (or just don't feel like watching the video)?

Below is some questions you might have and answers to these questions.

While these batteries are reliable there's some flaws - they tend to be big, heavier and take a long time charge.

However, solid state batteries aren't in production in cars yet.

The technology is still being tinkered with and scientists are still trying to figure out how to make a solid state battery big enough for a car.

Some believe these batteries will be ready by 2025 and others think it will take until the 2030's.

2) What Companies Is Louis Recommending?

At the end of the presentation Louis mentions his new report that identifies 3 companies that will benefit from the solid state battery boom.

He names one of them - QuantumScape.

QuantumScape made waves in 2020 after showing a scaled down solid state battery that could last 800 recharges (which is how long the typical lithium ion car battery lasts).

The stock of the company exploded after going public through a SPAC deal and QuantumScape reached an absurd valuation of $54 billion.

However, the stock has cooled down significantly since popping: 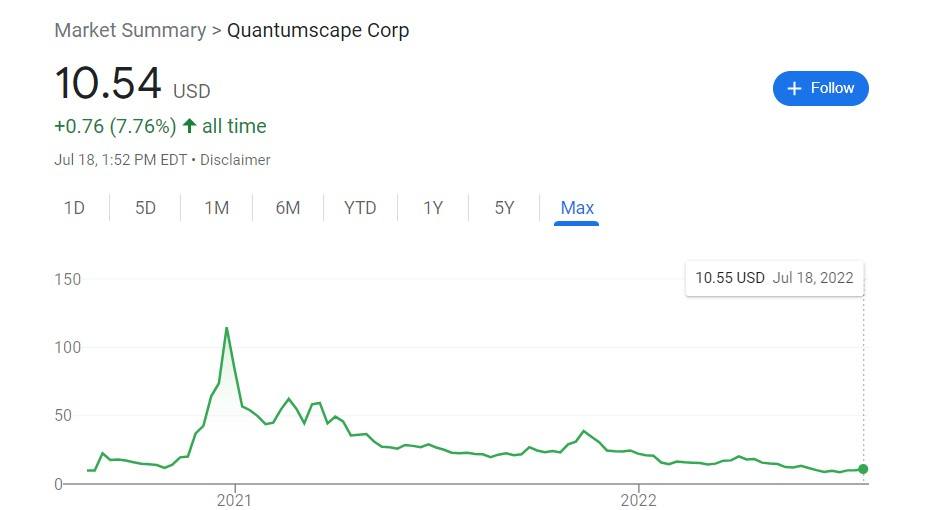 Well it seems QuantumScape is having a hard time making batteries that can actually be used in cars.

They're still years away from making a production battery and the earliest you can see something from them is 2025 - even this seems hopeful, though.

You can read more about QuantumScape here.

Louis gives a lot less clues about his other two companies.

The main clue he gives is one company is going to be "one of the first companies in China with a solid state battery."

There's a few different companies that could fit this description.

Louis doesn't give any clues that help determine which company he's talking about, though.

If you go to InvestorPlace's website they make Louis seem like he's this investing all star with a reputation that can't be questioned.

However, nothing can further from the truth.

Louis is a literal criminal and in my opinion should be banned from the stock picking industry for life!

What makes me say this?

He was recently fined $30 MILLION for misleading investors about a stock:

Basically Louis made up information about a company called AlphaSector to a bunch of investors.

This is basically the worst thing a stock picker can do in my opinion.

Beyond this Louis has a history of underdelivering and making horrible stock picks.

InvestorPlace is the publisher that's putting out this presentation.

InvestorPlace is your typical investing newsletter.

They sell a ton of other services and they have extremally aggressive marketing.

They put out these stock presentations in the hopes you'll buy a newsletter.

In this case they're pitching Growth Investor for $49.

However, InvestorPlace wouldn't really make that much money if they were only selling $49 newsletters.

Once you buy this product you'll be put in a sophisticated sales funnel that tries to get you to upgrade.

Some of the products at InvestorPlace costs thousands and even tens of thousands every year.

The goal is to get you to buy these subscriptions and you'll be sent promotions every single day to upgrade.

5) Should I Invest In Louis' Solid State Stock Picks?

That's really up to you to decide.

However, I will say the technology is years away and possible a decade away from being meaningful.

All of these picks are extremely risky and speculative.

If everything goes the way Louis claims then these companies will take off.

QuantumScape was valued at $54 billion at one point and the stock was well over $100.

But everything is just an "IF" at this point.

I think it would be smart to maybe hold off on investing in any of these companies yet.

Instead follow the market and pay attention to the breakthroughs.

Once these companies start profiting then invest.

Otherwise you can lose a lot of money if the companies tank.

Recommended: The Best Place To Get Winning Stock Picks

There's still a lot of unanswered questions with this presentation.

Unfortunately, Louis didn't leave a lot of clues behind in this one.

He mentioned QuantumScape by name so we know that's one of the stocks and he says one of the other two is a Chinese solid state battery company.

That's not a ton of information but we can probably narrow the list down to a few companies based on that.

As for the last company there's no clues or anything like that.

Overall, I wouldn't pay money to get Louis' stock picks and I don't think he's a trustworthy person.

How can anyone want stock picks from him after what he was charged with?

Anyway, if you are looking for winning stock picks I'd check out Motley Fool's Stock Advisor.

This service has beaten the market by 3X since inception and is extremely affordable.

Motley Fool's Stock Advisor is by far the best investing newsletter. To read my review of it, click below: