LiDAR stocks are becoming increasingly popular and many companies specializing in this technology have gone public recently.

I review a lot of investing newsletters and many stock pickers are pushing these stocks heavily.

If you're interested in investing I created this guide to show you the best LiDAR stocks.

Many of these companies range in stock price and some are definitely better than others.

I created this video that covers the top 5 that are currently available to invest in:

My BIG Warning About LiDAR Stocks

Before we get into what a LiDAR stock is and the best ones I just want to give you a warning about these investments.

People are looking to invest in LiDAR companies because of autonomous driving.

This technology helps these vehicles function.

Many stock pickers will hype up these companies and barely every cover the risk involved with these investments.

Basically no LiDAR company is profitable and many of these companies are burning through cash quickly.

On top of this there's a lot of competition in this market.

Each company claims they have an edge for one reason or another but it's hard to tell which will come out on top.

This is why I don't recommend in investing in any of these stocks yet.

The technology just isn't there yet and no one knows when autonomous vehicles are going to be a real thing.

I mean look how slow electric vehicles are coming along.

Most estimates claim autonomous vehicles won't really be a thing until 2025 the EARLIEST.

Do you really want to invest in non-profitable companies where the technology they specialize in may be a decade away from being useful?

My advice is to follow the market.. look at which companies get the big deals and more importantly which start to actually profit.

You might have to pay a little more for these stocks in a few years but it's much safer this way.

Look at how all LiDAR stocks have tanked in the last year: 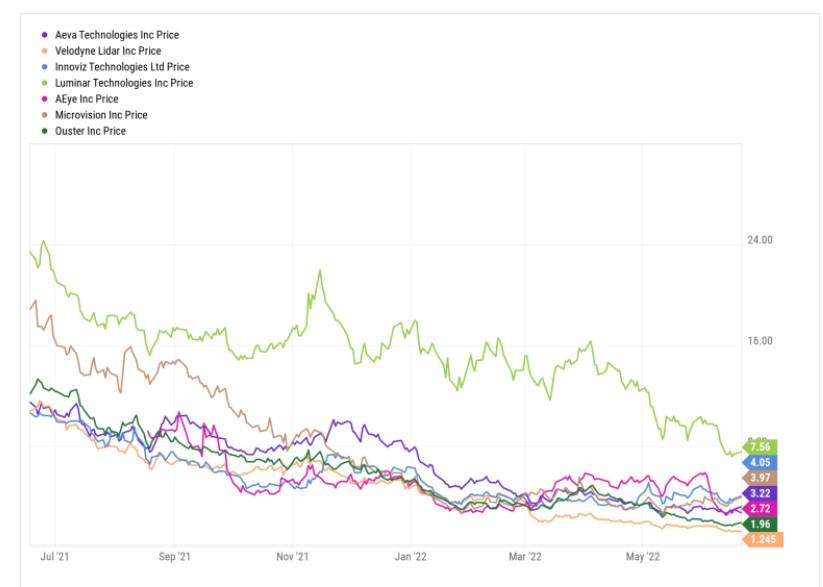 Every single LiDAR stock is down big in the last year.

Many of these companies won't exist in a few years meaning anyone who invests will lose all their money.

So be patient and don't dive into LiDAR stocks head first. 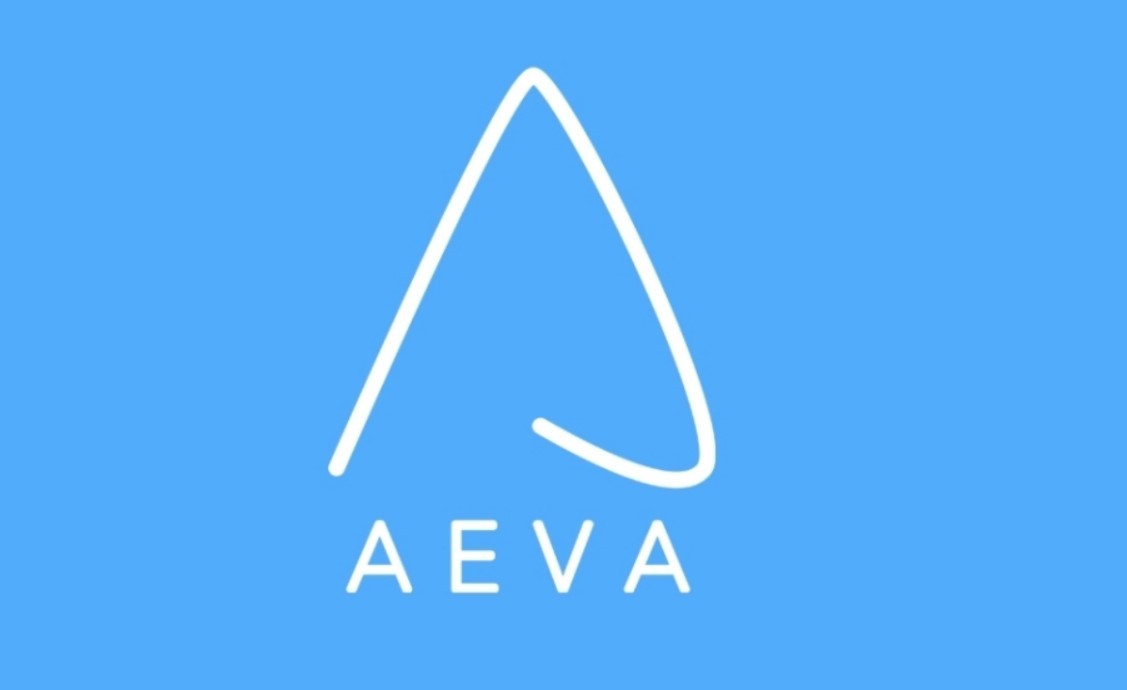 What's Aeva's Story? Aeva is a company started by former Apple employees and have what they call "4D" LiDAR technology.

They claim this "4D" technology allows their product to give better perception and higher resolution than competitors.

What's Aeva's Stock Price? Aeva is currently sitting around $3 as I'm writing this in late July.

Overall the stock has struggled like all LiDAR stocks.

It's post-merger stock price was insanely high, peaking over $19 before crashing: 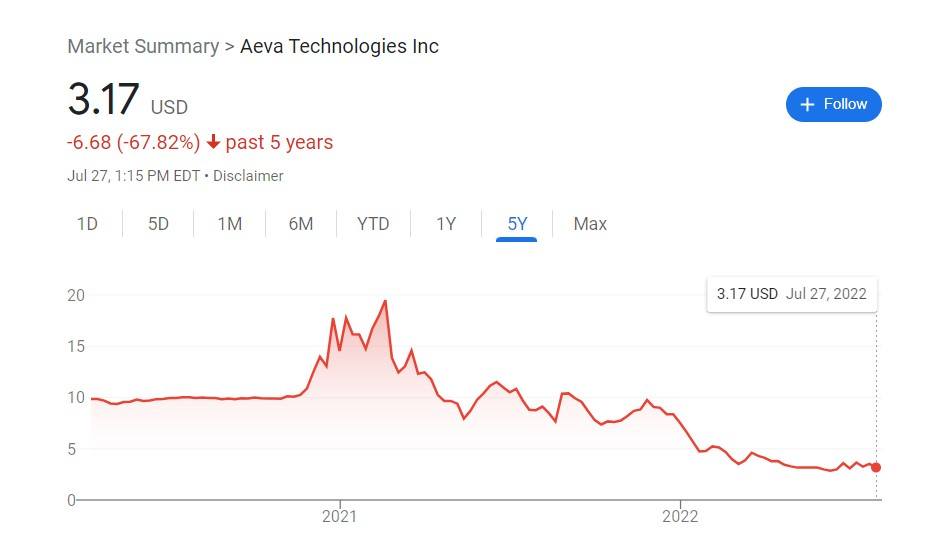 What's To Like About Aeva? People seem to like Aeva's story. There's been a long rumored Apple Car in the works for over a decade.

Some people believe it's right on the horizon and will be launched in the next few years.

Because Aeva is headed by Apple employees some people believe Aeva has an inside track to become their LiDAR supplier.

Also, they have a lot of cash on hand and their stock is much more reasonable than it was last year.

What's Not To Like About Aeva? Most people believe they'll spend around $100 million per year and revenue is growing slower than expected. Additionally, they're not projected to be profitable until around 2025 or 2026. 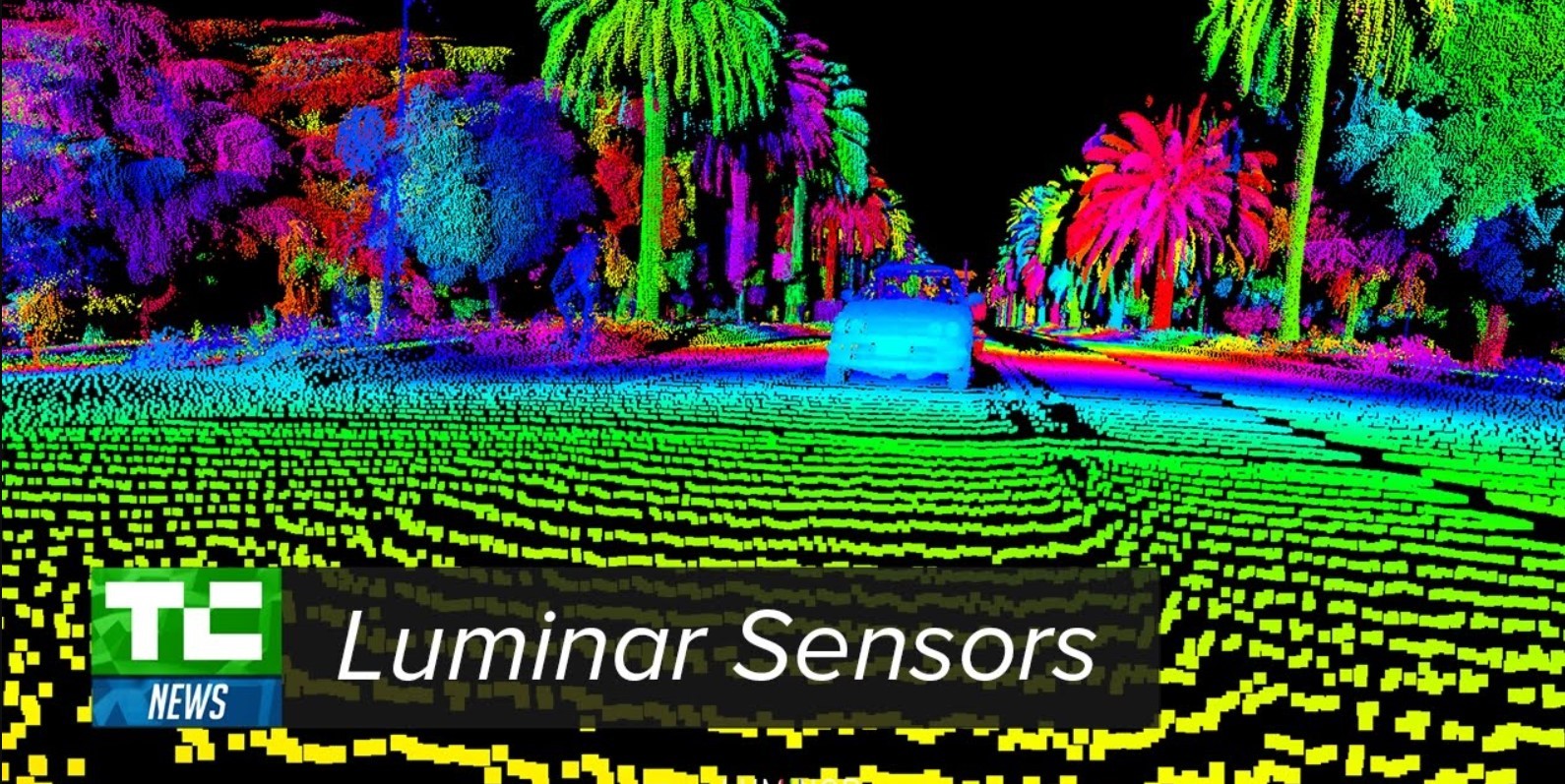 What's Luminar's Story? Luminar went public in August 2020 after a SPAC merger and was valued over $3 billion.

Additionally, they have some deals with automakers and make their own chips from scratch.

However, it's suffered the same fate as other SPAC merger LiDAR companies.

It's crashed significantly from it's high of over $37 and is currently sitting at around $6: 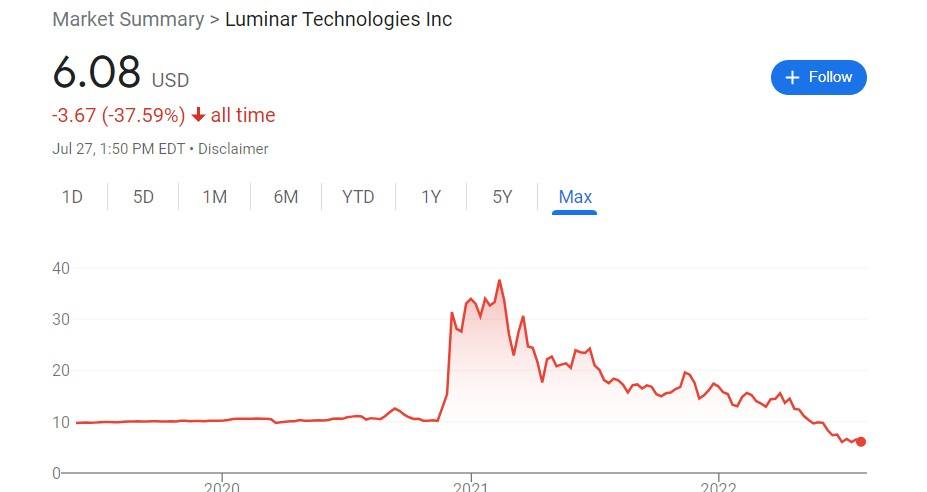 What's To Like About Luminar? Luminar is by far the biggest LiDAR company by market cap and is bigger than all other LiDAR companies combined.

It's 5 times bigger than Aeva.

Unlike Aeva, Luminar is actually growing faster than expected.

Additionally, they have deals with Mercedes, Volvo and Nissan in place.

Lastly, they have plenty of cash on hand to survive until profitable.

What's Not To Like About Luminar? A lot of their technology is still in development stage and are currently transitioning to a new technology for their LiDAR products.

It's supposed to be more commercially scalable but the jury is still out if that's true.

What's Innoviz' Story? Innoviz is an Israeli company that went public in August 2021 and was valued over $1 billion dollars.

They're most known for trying to introduce a $100 solid state LiDAR which hasn't happened quite yet.

What's Luminar's Stock Price? Innoviz has suffered from the same fate as every other LiDAR stock and has crashed since it's SPAC merger.

Currently the stock is around $3 after reaching nearly $15: 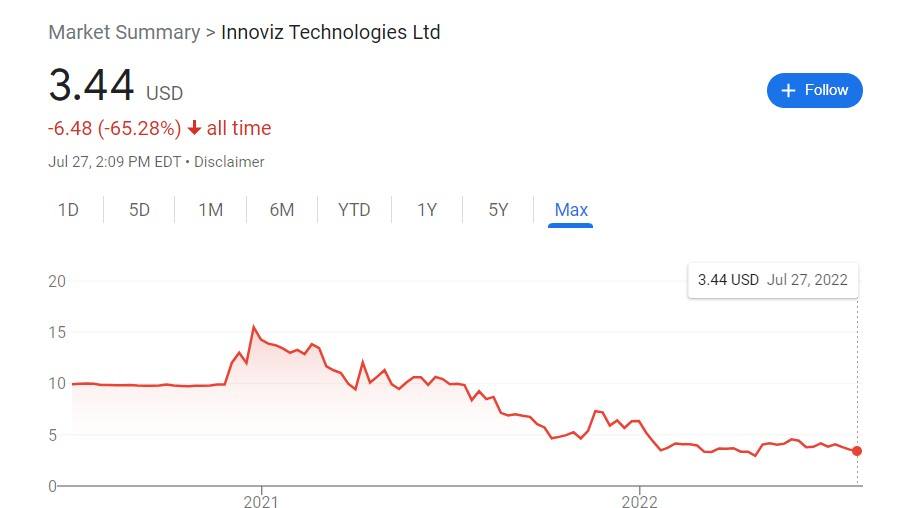 What's To Like About Innoviz? Innoviz has a deal with BMW and BMW just launched their series 7 with Innoviz sensors in them.

They also have a deal in place with chip making giant Nvidia and a partnership with Japan's biggest construction company.

What's Not To Like About Luminar? Their revenue is growing much slower than anticpated and is currently 39% below SPAC estimates.

Additionally, they've made promises in the past and haven't delivered.

For example, the $100 solid state LiDAR was promised back in 2018 and there's no sign of it being commercially viable. 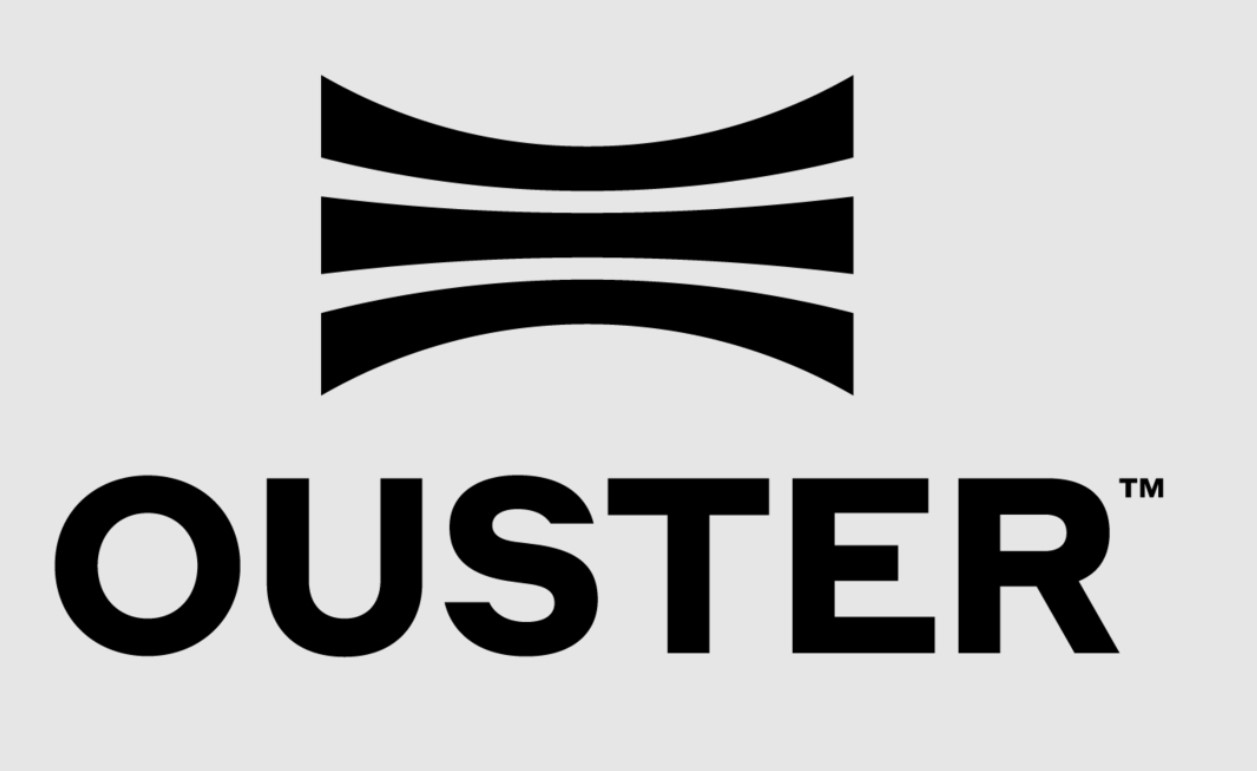 What's Ouster Story? Ouster is a San Francisco based LiDAR company that went public in March 2021 through a SPAC deal.

Ouster was created by two Stanford grads that previously worked for the laser company Quanergy.

What's Ouster's Stock Price? Ouster has suffered the same fate as every other public LiDAR company.

The stock has fallen significantly from its highs of $16 and is now around $1.70: 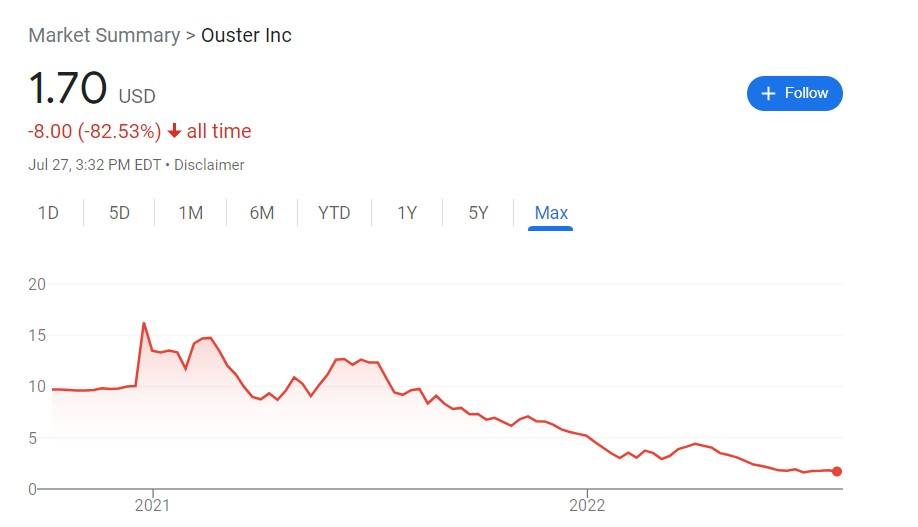 What's To Like About Ouster? Ouster is the most diverse company on this list and don't have all their eggs in the autonomous vehicle basket.

Automotive sales are only 1/3rd of the products shipped.

The rest of their products go into industrial markets, robotics and smart infrastructure.

Ouster also has one of the highest revenues on this list at $34 million.

Lastly, it's stock price is very low and some think it's a bargain at its current price.

What's Not To Like About Ouster? The only thing to not like is there's a lot of competition in this market.

Ouster is cheap right now but who knows if it's a company that will exist in 5 years.

What's Cepton's Story? Cepton is the most recent LiDAR company to go public through a SPAC deal.. they went public in February.

Cepton's claim to fame is their LiDAR technology is different than others.

They use Micro-motion technology which uses amplified vibrational technique.

What's Cepton's Stock Price? Cepton is no different than other LiDAR companies when it comes to stock price, though.

It shot up to around $18 a share after its SPAC merger but has fallen to under $2 since then: 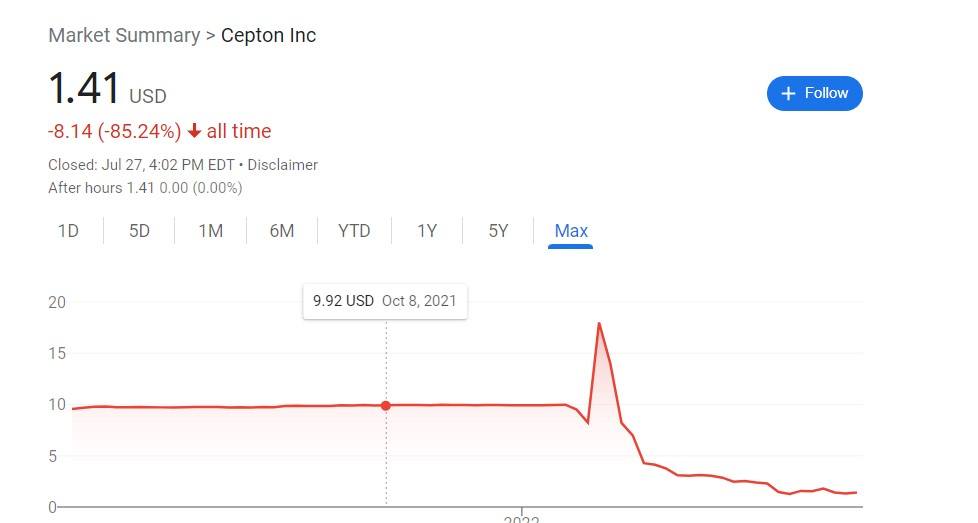 What's To Like About Cepton? Cepton has a deal in place with GM who is a behemoth in the auto world.

They'll be supplying them with sensors for their cars in 2023.

Apparently 9 different GM models will use their products.

What's Not To Like About Ouster? Cepton is a very small company and they have the smallest revenue of any company on this list at only $4.5 million.

The good news is that was 13% higher than they were projected.

So there you have my top 5 LiDAR stocks.

Again, these are stocks that shouldn't be bought yet - it's simply too early and too risky right now.

We're years from this technology being actually prevalent and it definitely wouldn't hurt to sit back and watch for a couple years.

The picture will be clearer in a few years.

The good news is there's a lot of good places to get stock picks.