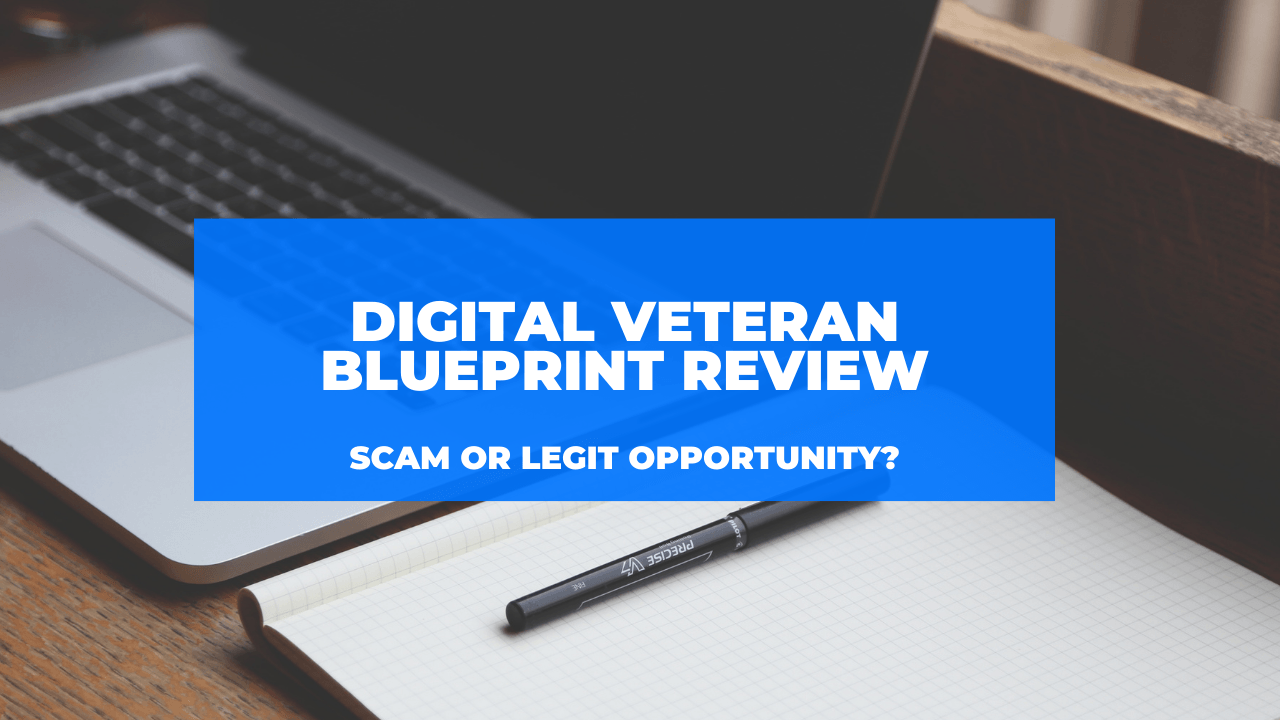 Below you'll find everything you need to know about this program including background information, eventual costs and what you'll be doing to make money.

You'll know if Digital Veterans Blueprint is right for you by the time you're done reading.

Do I recommend? Absolutely not

Digital Veteran Blueprint is a front to get you to join another program called OPM Wealth.

OPM Wealth is a straight up pyramid scheme that involves obtaining fraudulent loans and recruiting others into the scam.

This is a horrible and illegal business model.. similar programs have been shut down by the government and had to pay million in fines.

This won't last long and the odds of making any money are slim.

Better opportunity: I've reviewed all the top courses that teach starting an online business.. to see the best one (that's perfect for beginners) click below:

Who Is Josh Snyder? 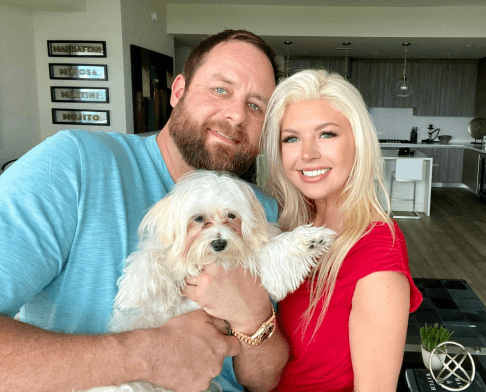 Josh Snyder is the creator of Digital Veteran Blueprint.

In his younger years he was in the air force (hence the "veteran" part).. after that he got a competitive and high stress job in sales.

According to him he would constantly travel but the pay was so good he couldn't give up the job.

Eventually he turned to the internet to replace his income.

Don't fall for Josh's appearances. The picture with the dog, the attractive wife, the pictures of him as a soldier..

He's a wolf in sheep's clothing.

That'll be clear by the time you're done reading.

What Is The Digital Veteran Blueprint? 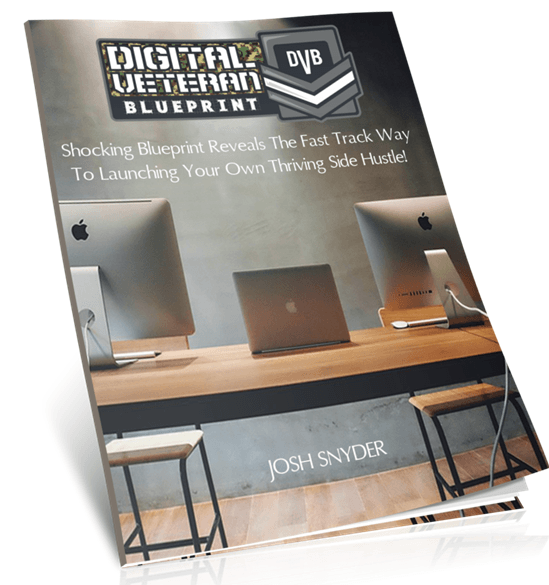 The Digital Veteran Blueprint is a free guide from Josh Snyder.

Basically it's just part of a sales funnel that eventually leads to a pyramid scheme called OPM Wealthy.

Before we get into OPM Wealth Let's look at the steps of the sales funnel.

First, you land the landing page at Digital Veteran Blueprint: 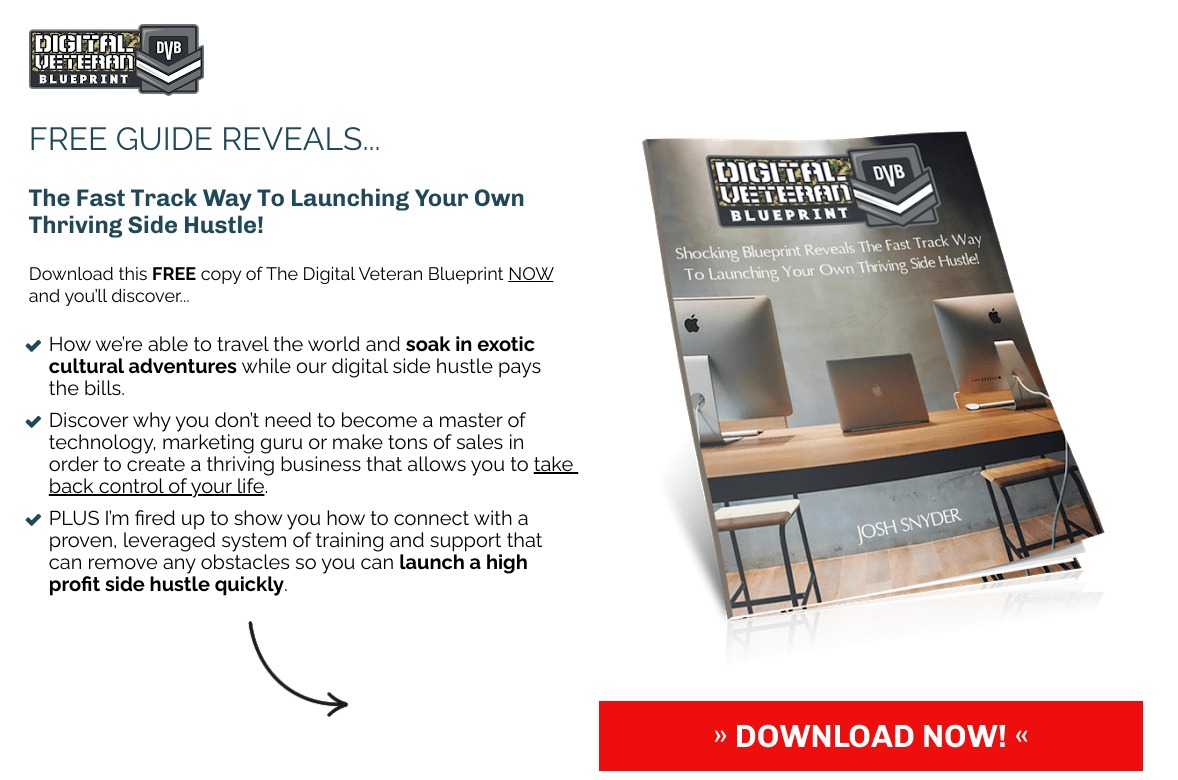 Here you have to put in your email and then the guide gets sent to your email.

The guide is 29 pages long and isn't really training on "launching your own thriving side hustle."

Instead it's filled with links that are trying to get you to a sales page to "partner with Josh."

If you click those links you're then brought to this page: 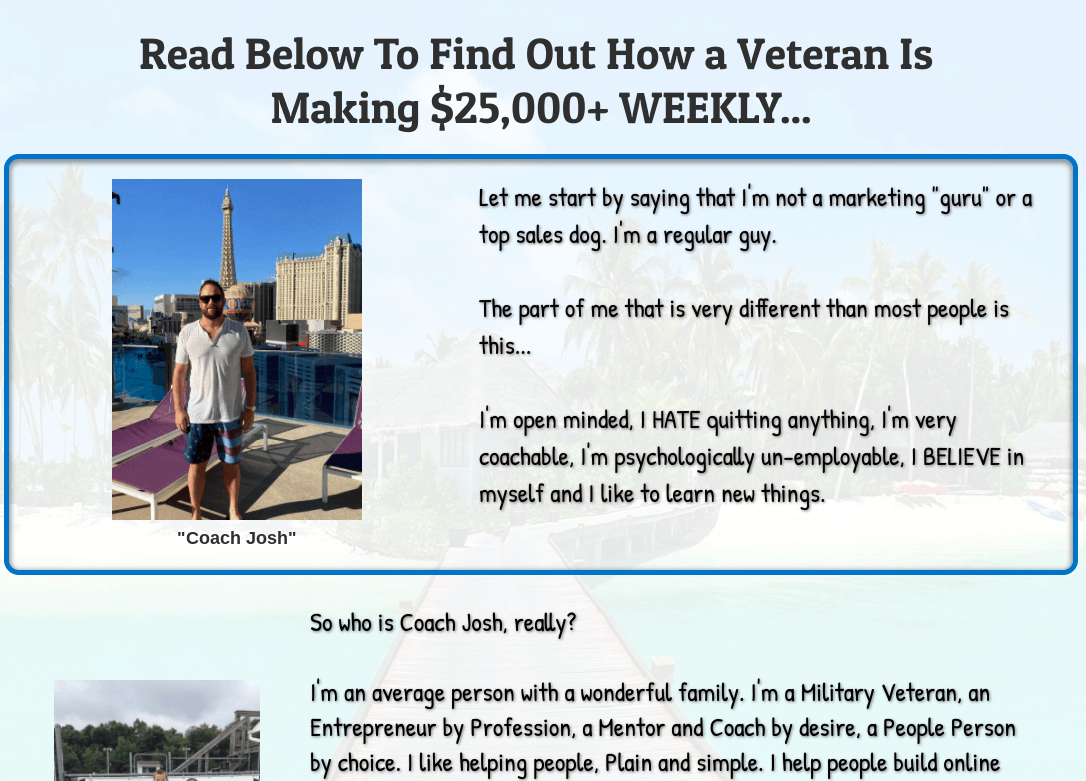 Here you'll get sold on the idea of partnering with Josh.

You'll hear from some of the people that have teamed up with him, see pictures of him on vacation and learn about all the money he's making only working a few hours a day.

From there you click on a button that brings you to a quiz that asks the following questions: 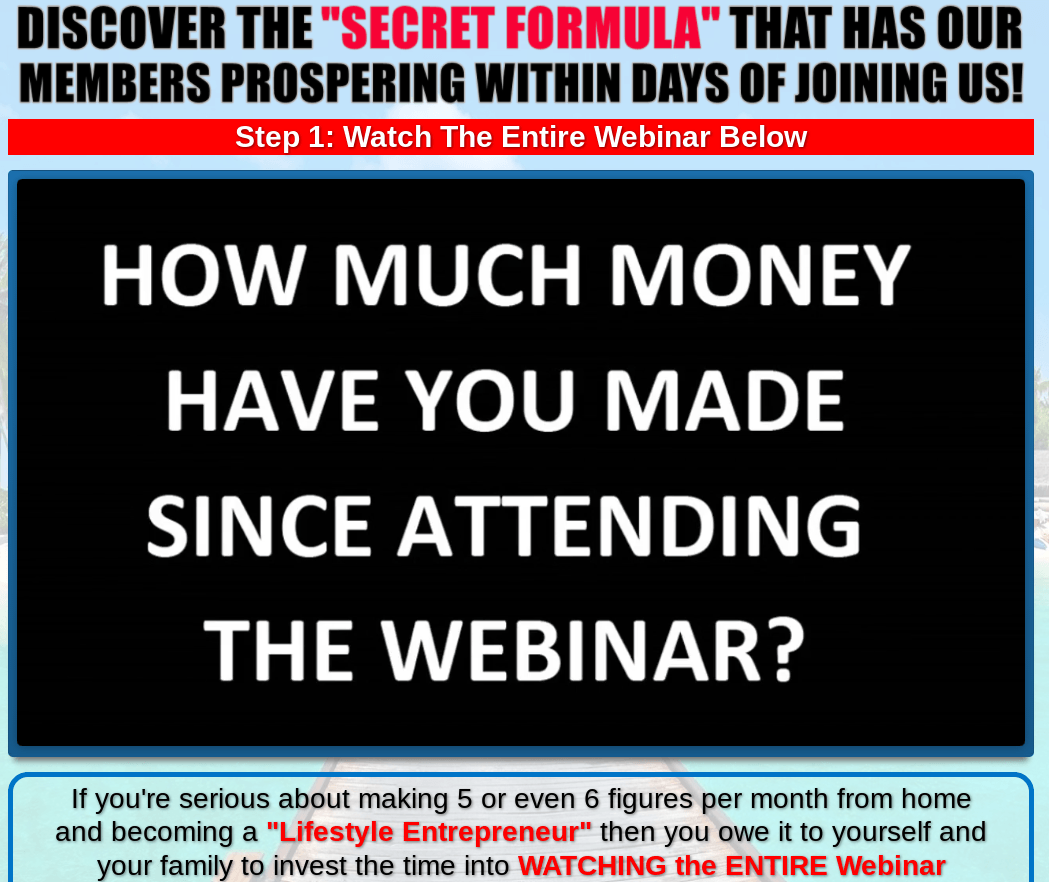 Here is where you'll finally hear the real pitch.

You'll be explained the system and then you'll be prompted to call Josh's team.

From there they'll explain how they'll help fix your credit score and to secure a loan for OPM Wealth.

The problem is OPM Wealth is a complete scam and pyramid scheme which I'll be explaining in the next section.

OPM Wealth Is A Pyramid Scheme 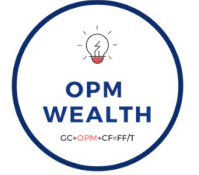 So you went all the way through the funnel and now you're being pitched on joining OPM Wealth.

OPM Wealth is a complete scam and pyramid scheme.

In these schemes the following is 100% guaranteed to happen: 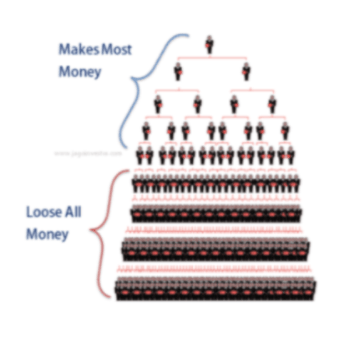 Pyramid schemes are illegal because of this and OPM is illegal.

It'll eventually be shut down and charges will come to everyone involved or the the owners of OPM Wealth will shut it down and take off with everyone's money.

Similar scams like this were MOBE and Digital Altitude.

They're the exact same business model.

You can make money online without scamming people.. to see how, click below:

One of the questions in the quiz you took in the Digital Veteran Blueprint sales funnel asks what your credit score is.

Seems like a pretty odd question to ask, huh?

The reason they're asking is they're going to help clean up your credit and secure a loan to join OPM Wealth.

This is actually illegal and is using deception to get a loan.

No bank in a million years would give a loan to join a pyramid scheme. Not one.

So you're going to have to be misleading in your loan application to get the loan.

That should be a huge red flag.

The reason you need to get a loan is the price to join OPM Wealth is very high.

Here's the costs to join at different levels:

All this is paid in Bitcoin.

After you pay to join you can only make money by convincing others to join (recruit other people).

You earn 60% of what anyone you recruit pays into the scheme and 10% of what your recruit's recruits pay.

Pyramid schemes are guaranteed to fail because recruiting will eventually slow down.

Because there's no other revenue sources, once recruiting slows there's not enough money to pay everyone.

That causes a collapse as people pull out when they don't get their money.

Only a few people at the tippy top will make significant money and you'll lose everything.. most likely never to see it again.

If you look at OPM's web traffic you can see it's falling sharply and has been for months: 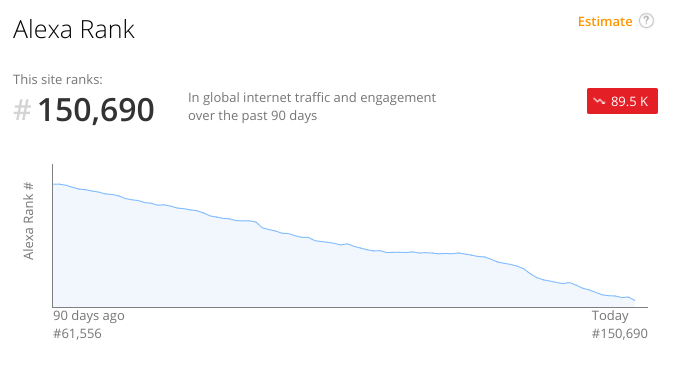 When this happens in a pyramid scheme a crash is imminent.

1) Is Digital Veteran Blueprint's offer worth it?

I couldn't think of a single worst business model than a pyramid scheme where you need to secure a loan to enter.

There's an extremely low chance of you making any money and the only way you can make money is to recruit.. which means knowingly getting people to join the scam.

There is absolutely nothing good about OPM Wealthy.

He's a complete scam artist.. he may seem nice with his dog pictures and his story of being a soldier but that's just a facade.

He knows what he's doing. He knows it's immoral and he knows it's going to lead to most people losing money.

3) What do you get with Digital Veteran Blueprint?

Basically you get a 29 page PDF that goes over Josh's life story and a few online business principles.

Really, though, it's just part of a sales funnel to get you to join OPM Wealth.

4) What does Digital Veteran Blueprint teach?

How to scam people..

Seriously that's what you're being taught. It leads to you joining OPM Wealth and convincing others to do the same.

You're not selling anything or learning any skills.

5) Are there any testimonials?

There are but who knows if they're real.

Do you think the people that are going to help you secure an illegal loan to join an illegal pyramid scheme would be above faking testimonials?

If you don't have the money don't worry.. the OPM Wealth coaches have you covered!

They'll help clean up your credit score and help you lie to get a loan.

Also, all payments into OPM Wealth is made in Bitcoin. So you have to take your loan money and buy Bitcoin with it.

Once this thing collapses you'll most likely never see your money again.

There's plenty of ways to create a legitimate online business.

To see the best way for beginners, click below:

This is nothing more than a sales pitch to join a pyramid scheme and get fraudulent loans.

This is absolutely the worst kind of business model imaginable and you shouldn't get involved with it.

You shouldn't "partner" with Josh or join OPM Wealth.

There's still a lot of ways to make money online, however.

I've reviewed hundreds of courses that teach this..

To see which course I think is best for beginners, click below: