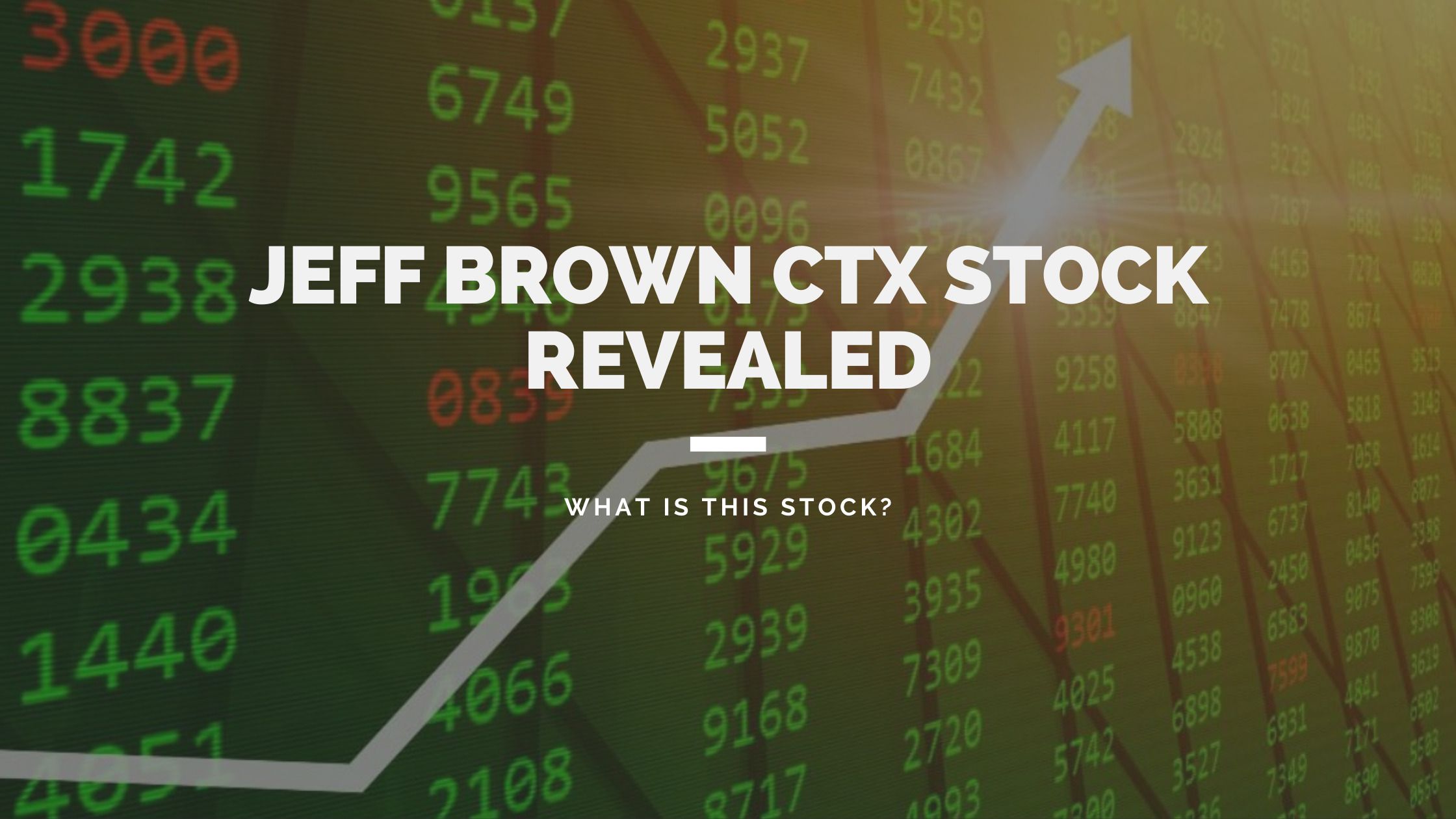 Jeff Brown is out with a new stock presentation..

It's full of hype, drama and evokes mega-billionaires Bezos and Musk.

Through out the presentation Brown hints at a new technology called CTX that he believes "could end disease as we know it."

That's a pretty lofty claim and if true you'd want to invest in this company, right?

The problem is Jeff won't tell you the stock behind CTX is unless you subscribe to his newsletter.

Well I have good news - I figured out the company being teased by Jeff.

Read below and I'll give you the stock and some background information on the company.

Additionally, we'll look at Brown's ability to predict stocks and you'll get an overview of The Near Future Report (the newsletter Brown is trying to sell). 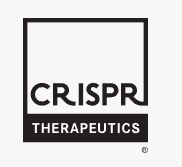 Summary: The CTX stock presentation from Jeff Brown is very manipulative and dishonest.

The stock being teased is CRISPR Therapeutics and the product being pitched is The Near Future Report.

Investing in CRSP is your decision but Jeff is being extremely misleading through out the presentation.

Additionally, I wouldn't purchase The Near Future Report either.

Results are hit or miss and there's too many red flags to ignore.

Better opportunity: I've reviewed all the best places that teach picking stocks.. to see my favorite place to get stock ideas (that costs $1), click below: 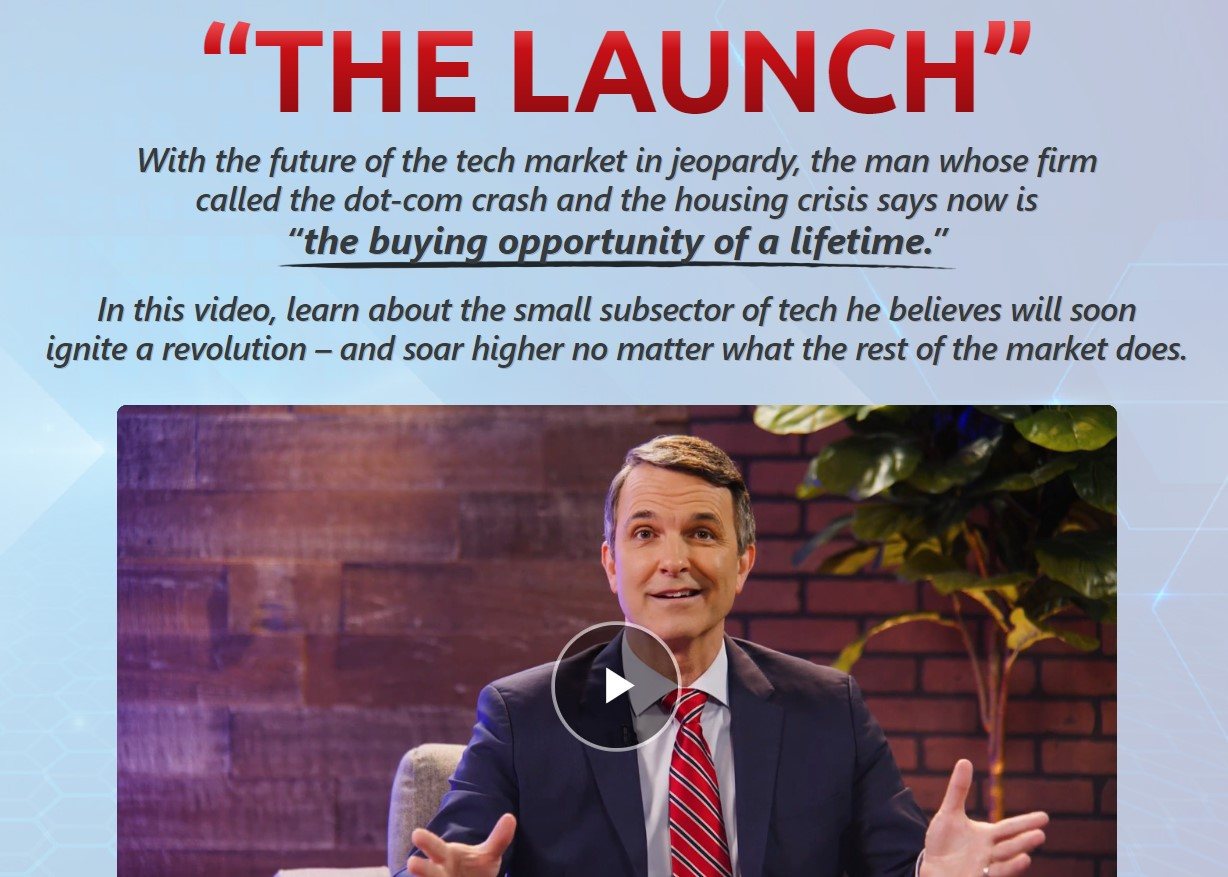 This teaser presentation opens up with Chris Hurt talking about how tech stocks are crashing.

Eventually he brings in Jeff Brown and he compares the current tech stock predicament to the Dot Com Bubble nearly two decades ago.

In the pitch Brown claims while tech stocks were crashing in the Dot Com Bubble pharmaceutical companies were gaining.

The premise here is the same thing is happening.

In this instance he's talking about biotech stocks.

In particular Jeff is talking about a technology he calls CTX and a product called CTX 001.

Brown even claims this technology could end disease!

Sounds crazy (and a little unbelievable).

From there Brown claims scientists are over the moon about this technology and it could pioneer a trillion dollar industry.

Jeff references a story of a blind woman getting treatment with CTX and getting some of her vision back!

This is actually where we get our first clue about the stock.

I searched in Google for this article and was able to find it: 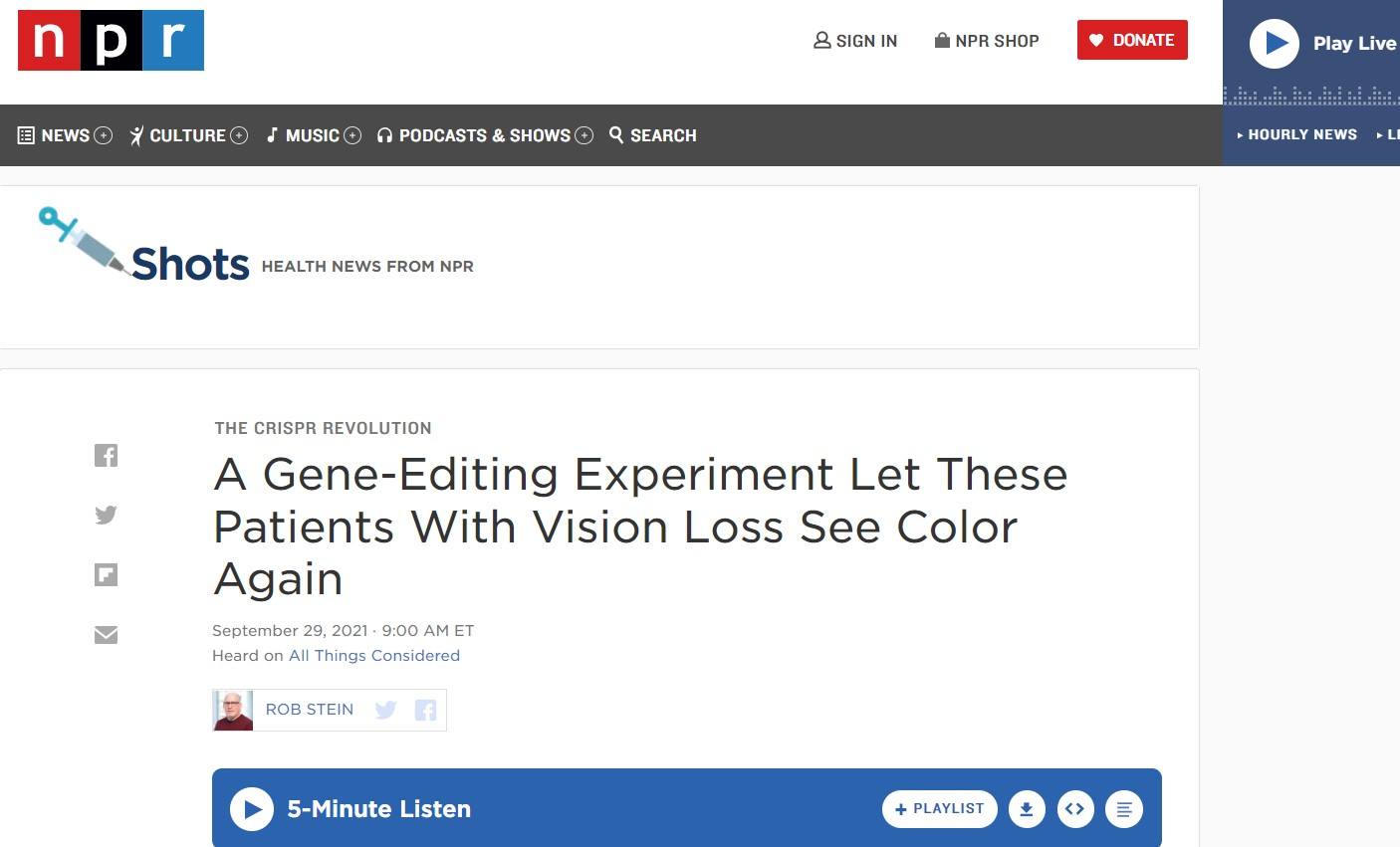 The gene editing technology being used here is called CRISPR.

At this point you know the CTX stock has to do with CRISPR technology.

Jeff moves back into pitching the mystery CRISPR company and explains why you've never heard of it.

Until the FDA approves the product for use it can't be advertised.

This is where Jeff comes in (according to Jeff).

He's a biotech insider and gets to talk to doctors. He's flown to the labs and checked out the technology.

This is why he knows about it and you don't.

Next, Jeff talks about Musk and Bezos both investing in this technology.

Newsletters are constantly referencing Musk and Bezos because it gets attention.

They're connection to this technology isn't really important, though.

It's the next clue that Jeff gives out that makes me sure the company he's talking about is CRISPR Therapeutics AG.

I was able to find the article. Notice how Jeff left out the second part of the article title:

It does reference hedge funds investing in CRISPR Therapeutics AG but it explicitly states it was THE WRONG TIME.

That part of the title is cut off in the presentation.

Finally, to prove this is the right company I searched CTX 001 and found this press release referencing CRISPR Therapeutics AG and CTX 001:

So I guess the question now is whether or not to invest in this stock..

Well I'm not going to give you an answer to that but I am going to show you how manipulative Jeff is being in this presentation.

Is CRISPR Therapeutics Worth Investing In?

If you're new to watching stock presentations there's a chance your have your credit card out after watching.

Put the card away!

This presentation is heavy on marketing and misleading data.

Read on before you throw thousands into this stock.

The first thing I want to talk about is the MASSIVE returns Jeff points to with other biotech companies.

In particular he references Gilead Sciences, Biogen and Amgen.

The charts he uses to demonstrate their returns is laughably misleading. 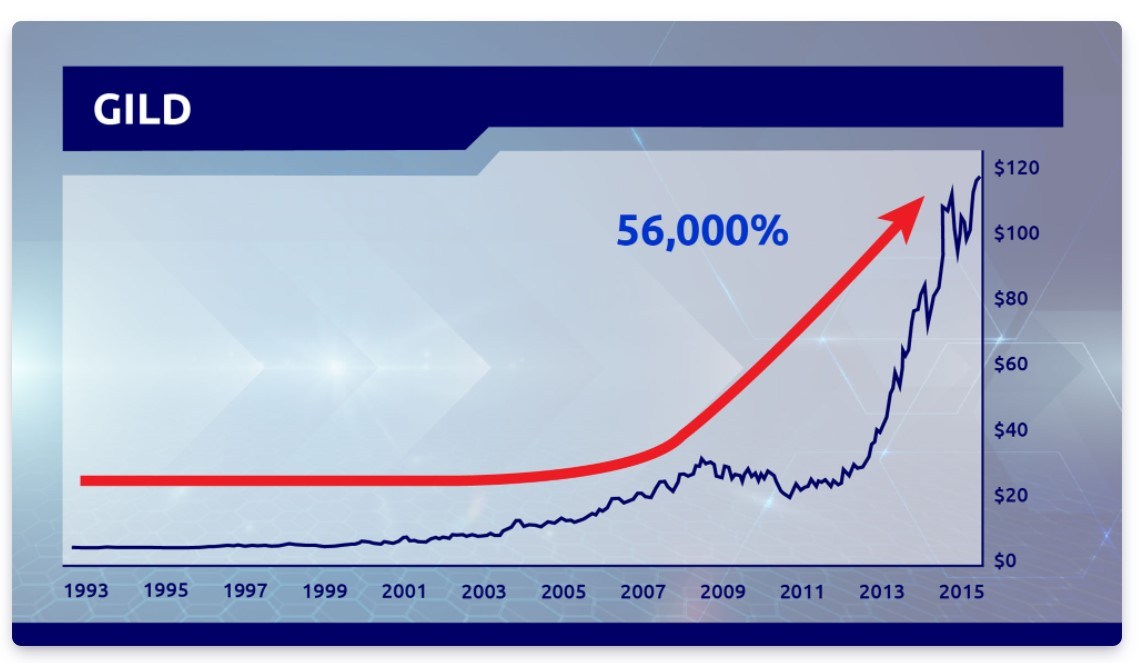 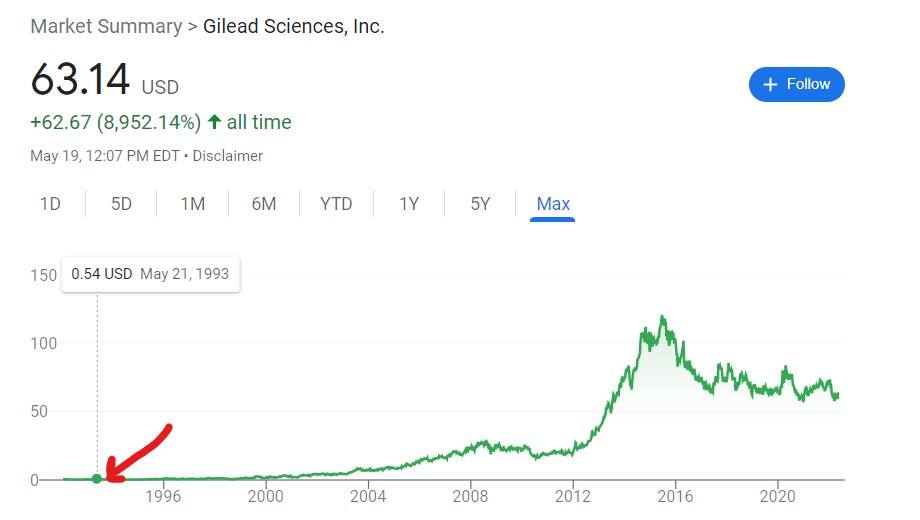 He does it again with Biogen.. 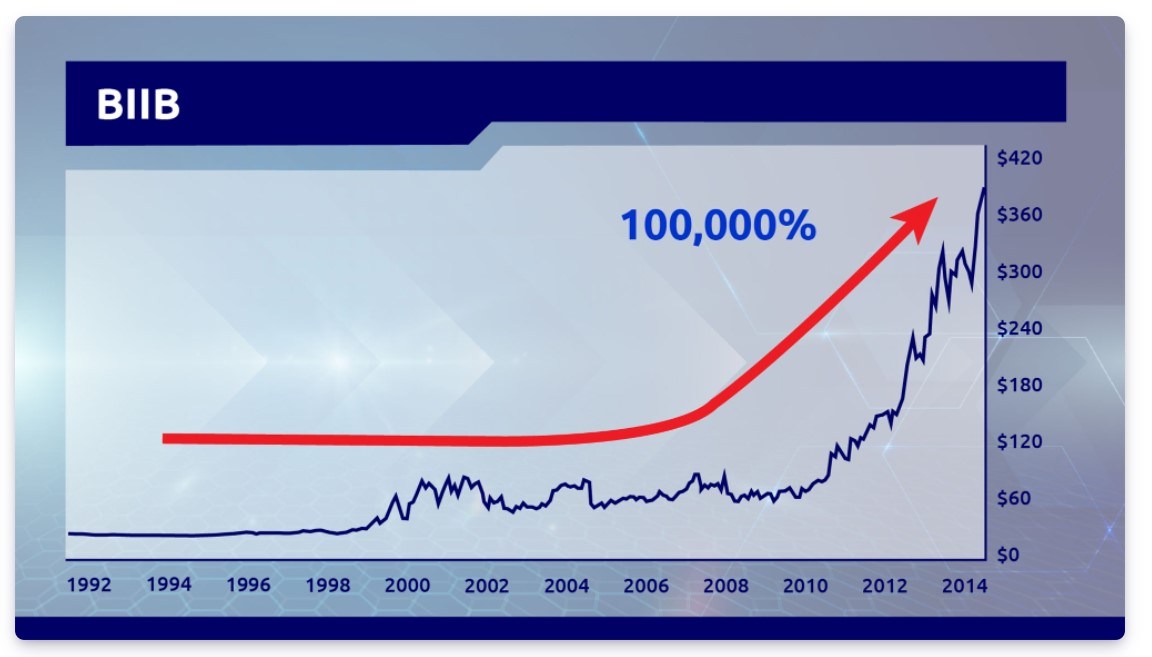 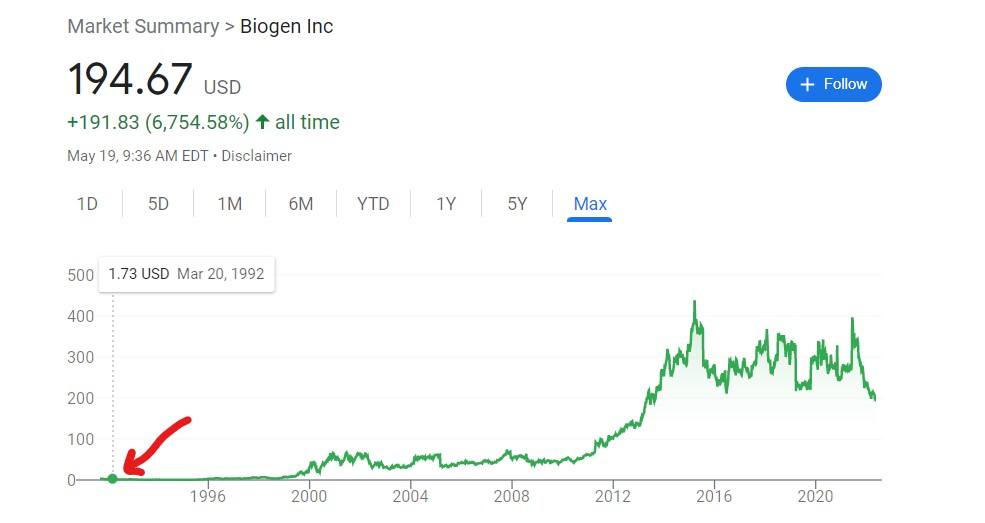 Jeff does the same exact thing with Amgen. 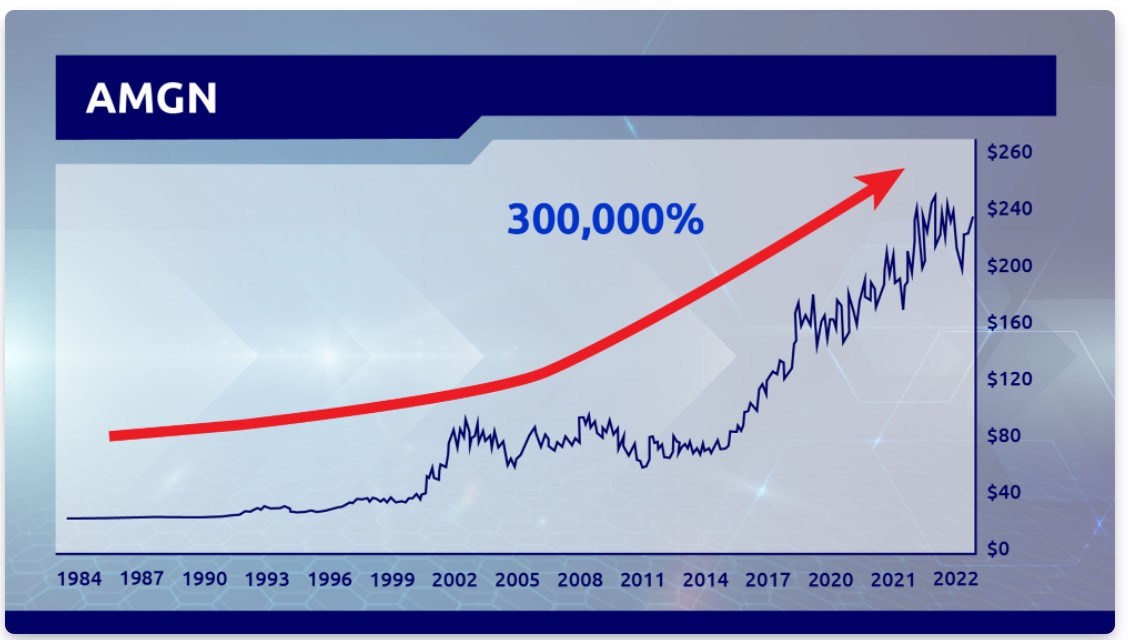 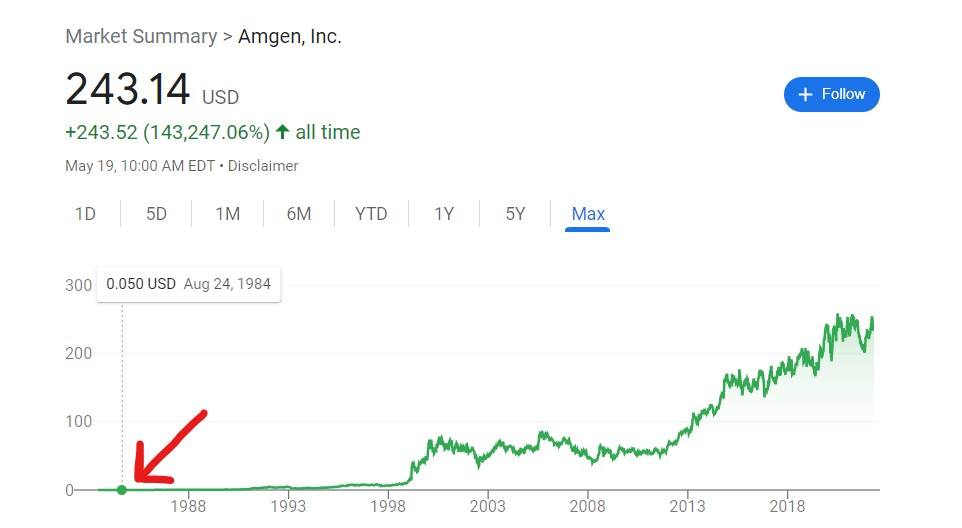 Again.. why is Jeff Brown doing this?

Why is he making it seem like these stocks were more expensive than they were?

The reason is CRISPR Therapeutics AG costs over $50 right now and has gotten as high as $199: 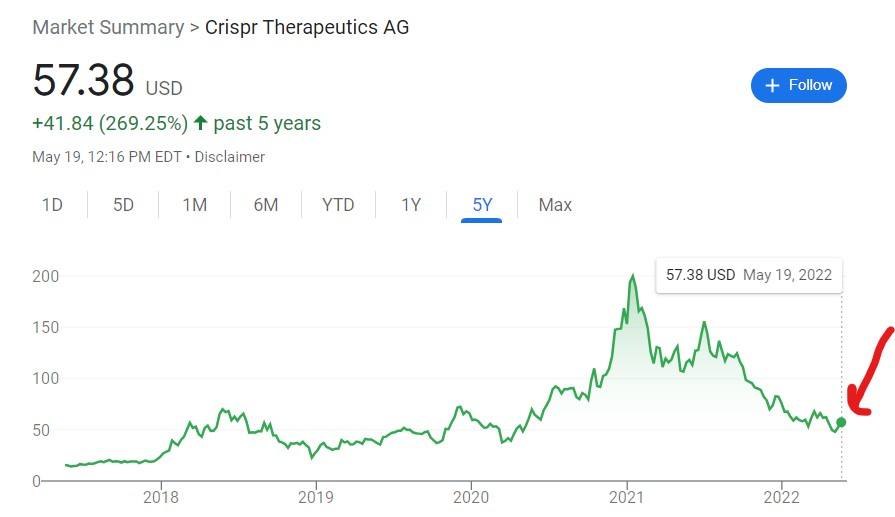 He's trying to make it seem like you can get 100,000% returns with this company but hiding the fact that could never happen.

This stock would need to be $1 for that to have any chance of that happening.

Jeff is just manipulating you into thinking this stock can get you rich.

So the question now is can Jeff Brown pick good stocks and is his newsletter The Near Future Report worth it?

One of the funny things about the CTX stock presentation is Jeff Brown makes it seem like he predicted the tech stock crash happening right now.

And he makes it seem like he's predicted every big market event of the last 30 years.

The truth is there's zero proof of him predicting anything.

And up and until now he's been heavily promoting tech stocks!

For example in September 2020 he recommended the stock pick Cognex.

Here's how the stock has performed since then: 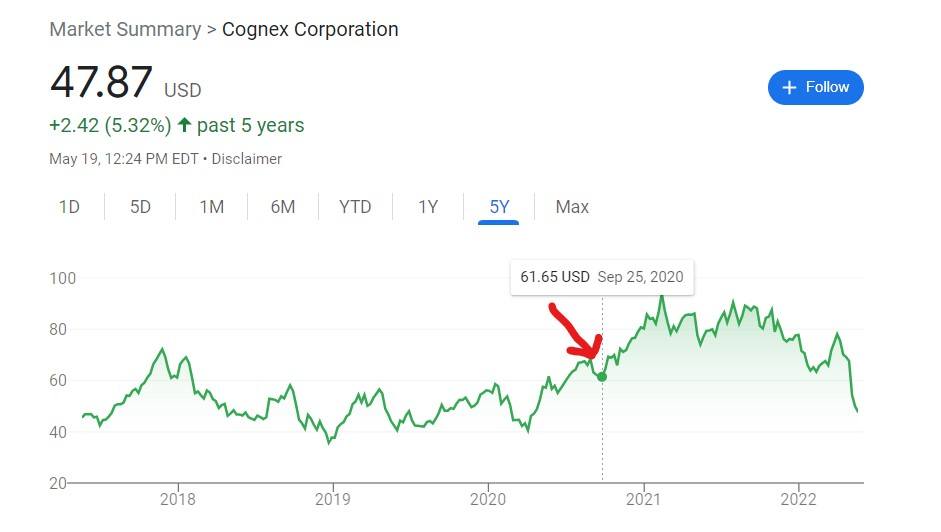 It was doing well like most tech stocks but has cratered recently.

I'm reading Jeff's presentation about the stock and nowhere does he mention a Dot Com Bubble 2.0 happening in the "near future."

He recommended NVIDIA in the same teaser presentation.

The same thing is happening: 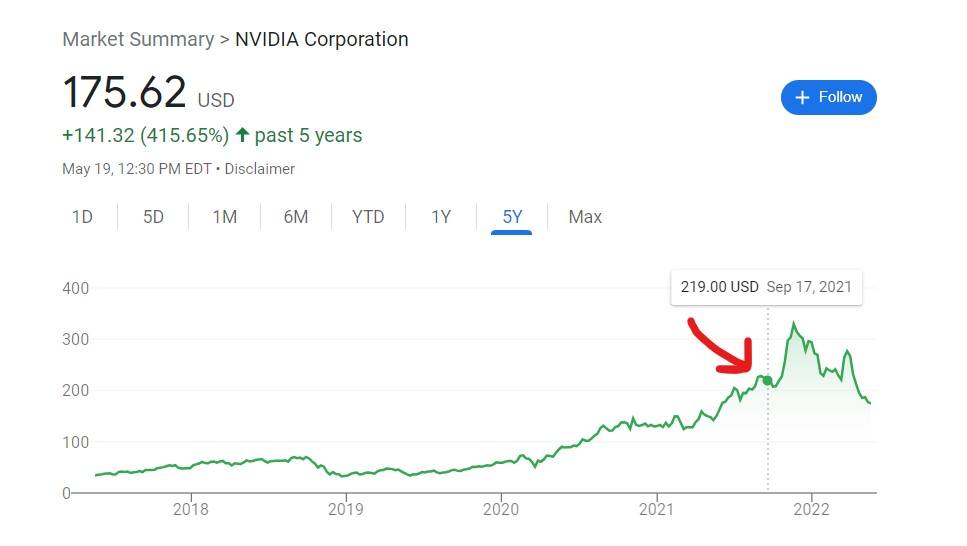 Basically all the Near Future Report did in the past was recommend tech stocks!

That's why Jeff made this sudden pivot into biotech and medical stocks.

The Near Future Report Is FAKING Testimonials!

I've reviewed over 100 investing newsletters and a lot of them are pretty much the same.

Part of this is because they're all owned by the same company (which we will cover in the next section).

When looking at the sales page for The Near Future Report I spotted something so ridiculous, it should make you not want to buy from Jeff ever again.

What I'm talking about is the testimonials: 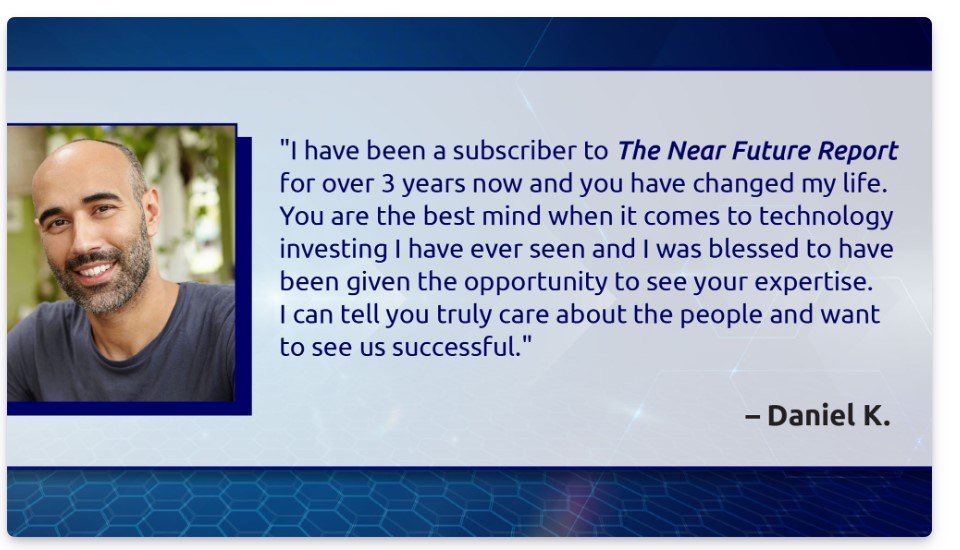 My jaw dropped when I saw this picture.

A couple years ago I did a review for an investing service called Project 303.

It was a terrible product run by Andrew Keene.

However, Project 303 and The Near Future Report is owned by the same company.

One thing I pointed out in Project 303 is Andrew was faking testimonials AND HE USED THE SAME PICTURE ON HIS SALES PAGE:

If you do a reverse image search of the picture you'll see it's just a stock photo:

How UNBELIEVABLE is this?!

Just shows the type of person you're dealing with when it comes to Jeff.

It wasn't just that one testimonial either.

All the testimonials on The Near Future Report are fake.

Here's another one that's just a stock photo:

What kind of a company would pull this kind of stuff?

Well it turns out an extremely terrible one..

This Company Steals From The Elderly!

The company that owns both The Near Future Report and Project 303 is Agora.

In fact, Agora is the LARGEST distributor of investing newsletters in the country and they own dozens of publishers and sell hundreds of newsletters.

This company is extremely unethical, though, and one of the most predatory.

For example, they recently were fined $2 million for defrauding elderly people with phony financial and health products:

They literally claimed they could cure diabetes in elderly people without exercise or diet change!

This is not a company you want to get involved with.

Once you do they try to suck every penny out of you.

The Near Future Report may be cheap but Jeff's other products costs thousands a year.

The Near Future Report is just bait.

Once you put in your credit card details you'll be bombarded with expensive upsells.

The marketing will be extremely manipulative like the CTX presentation is.

They'll try and shame you, scare you and doing anything they can to milk you dry.

You should always avoid Agora - this includes ignoring The Near Future Report.

I understand if you left Jeff Brown's CTX Stock presentation feeling like you're going to get rich.

That's the point of the presentation.

The people who put that together are expert marketers who's sold hundreds of thousands of subscriptions before this - possibly millions.

They know exactly how to excite you and in my opinion use rotten tricks to do so.

But once you peel back the curtain you'll see this presentation is nothing special.

It comes from a guy that has inconsistent stock picks in the past.

The company that sells The Near Future Report and is running this teaser is absolutely horrendous.

You're made to believe there's an opportunity to make 50,000% returns here but that's not possible with CRISPR Therapeutics.

If you want to invest in this company that's up to you - it could make you money one day!

But I'd avoid The Near Future Report and any other Agora product.

I'd pass on this pitch and the products associated with it.

The good news is there's plenty of quality investing newsletters out there.

To see my favorite (which only costs $1 to try), click below:

Capitalist Partner's Weekly Insider delivers weekly picks to your inbox. You can try them for only $1. Click below to learn more: