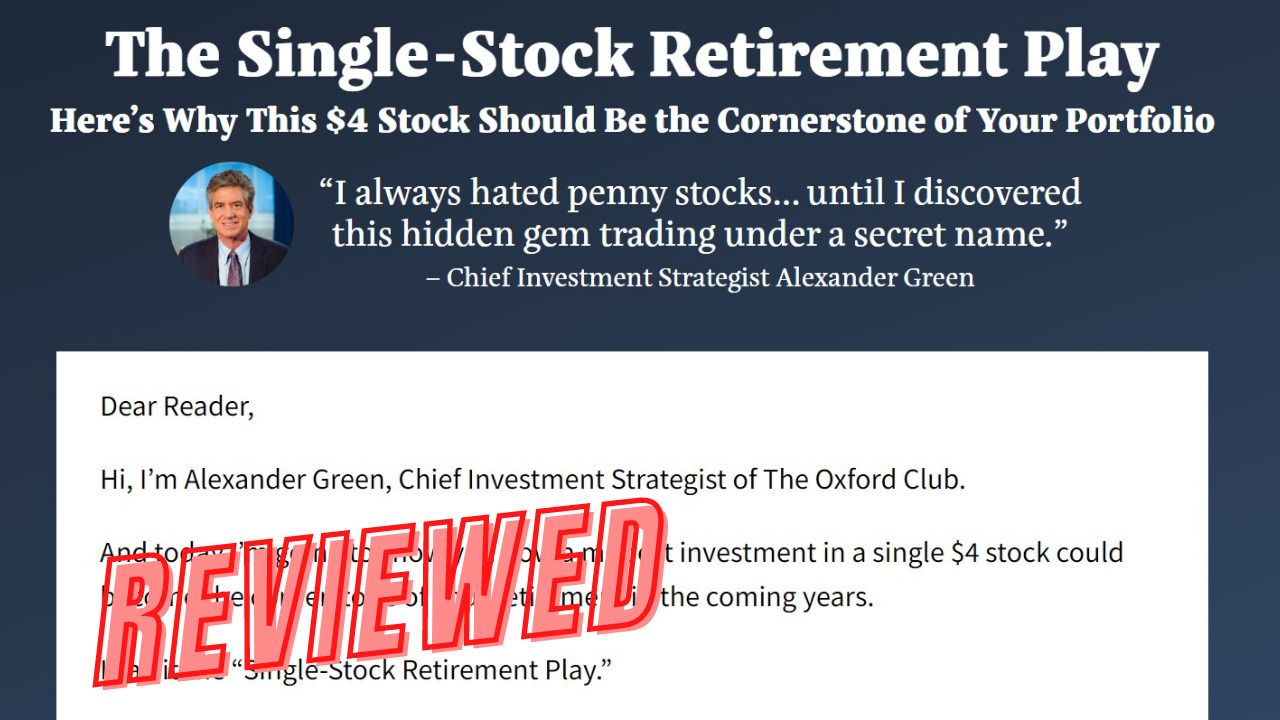 Alex Alexander Green of Oxford Club has been running a teaser ad for what he calls "The Single Stock Retirement Play."

He claims this $4 stock "could become the cornerstone of your retirement in the coming years."

Alex has also been running this ad for a few years now..

The good news is there's enough clues in the presentation to identify the stock without having to buy the newsletter.

So if you're interested in learning about what the "single stock retirement play" is read on!

The Single Stock Retirement is Foxconn which is a MASSIVE company in China and Taiwan - it's the 22nd biggest company in the world according to Forbes.

They manufacture electronic parts for many big corporations like Apple, Microsoft, Sony, Blackberry, Nintendo and more.

This ad originally started running in May 2018 and the price was around $7, so it is down overall.

However, the stock has gotten as low as $4 and if you bought then you'd be up (and would have doubled your money at one point).

The problem with Foxconn is they have been unable to grow or improve margins.

The stock has been fluctuating from$4 to around $9 for over a decade now.

So not sure this is a stock you want to go all in on and gamble your entire retirement on.

Looking At The Single Stock Retirement

Previously we revealed a stock he was teasing with Bill O'Reilly.

Today we're going to be looking at Alexander's teaser hinting at a "one stock retirement play."

Green starts the presentation by asking what the "perfect stock" is:

He claims it must have the following:

More so than anything Green believes the stock most be undiscovered.

He believes only 1 in every 50,000 investors should know about it.

This will ensure the stock is cheap and can have big gains going forward.

Alexander and his team at Oxford believe they have found this stock.

The company their teasing makes products in cutting edge industries like:

This mystery company also has deals with:

Alexander claims this stock is so cheap because it "trades under a secret name."

After this he drops some hints that allows us to figure out the name of the stock.

He claims they have a deal with AMD and Intel to build their motherboards.

Also, they have a deal with Sharp for $8.8 billion to build their LCD screens.

All of these clues lead to the company Alexander is teasing to be Foxconn: 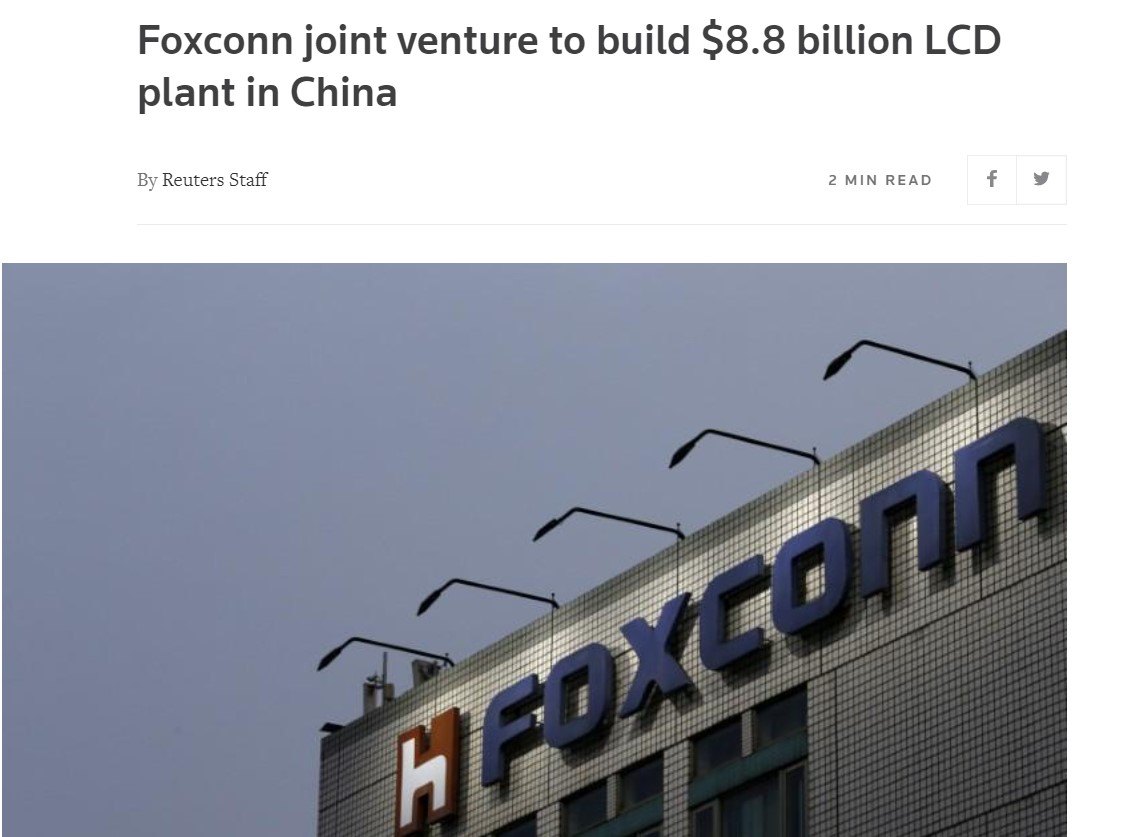 The reason Green says it's "trading under a secret name" is the stock is listed under it's original name Hon Hai Precision Industry.

It's currently listed on the Taiwan stock exchange and the price is around $6.40.

The question now you're probably asking is if the stock is worth buying.

We'll answer that in the next section.

Is Foxconn Stock Worth Buying?

I'm sure you're wondering if it's worth emptying your bank account into this stock.

Let's explore just how good of a stock this is before we put any money into it.

One thing Alexander says early in the presentation that's completely incorrect is that a low stock price is what is important.

What matters the most for a stock is market cap and valuation.

These indicate how much room for growth there is and whether a stock is overpriced or underpriced.

So while Foxconn may seem very cheap at around $6.40, it's really not.

This is an absolutely MASSIVE company  that has a market cap that goes anywhere from $39 billion to $50 billion and it's one of the biggest companies in the world.

It's the biggest privately owned corporation in China.

So while the price is cheap compared to an American stock there's not a ton of room for growth.

That's all that matters - the percentage a stock goes up after you invest.

This stock has no shot at massive gains you'd expect from a smaller cap stock.

The Stock Has Been Stagnant

Another thing to note is Foxconn's stock has been very stagnant for over a decade.

Here's the stock movement since 2008: 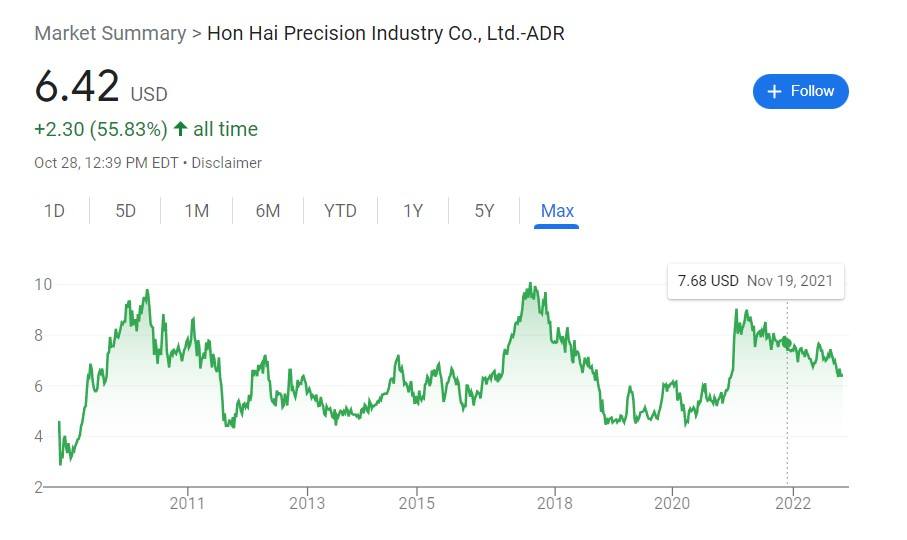 As you can see it's pretty much always stayed above $4 and under $10.

They play a big part in the manufacturing of the iPhone which is the single biggest consumer product of the last decade - and possibly ever! 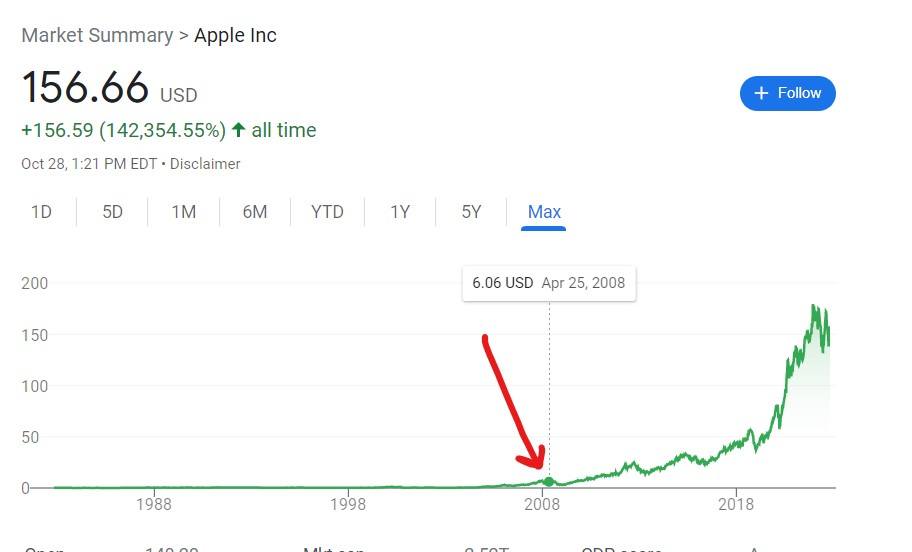 Foxconn in the same period of time has gone up about 85%.

So you can easily expect more gains investing in other companies. Don't be fooled by the low stock price!

They're Pegged To The iPhone

Despite being a massive company most investors look at Foxconn simply as a manufacturer of the iPhone.

This causes a lot of problems because it means the share price is tied closely to the iPhone's success (except without the explosive gains of the last decade).

The only way for this stock to really get massive gains is if it branches out into new territory.

They're trying to get a start in the EV car market but it's unclear in what capacity.

Are they going to actually engineer cars or are their parts going to be used in EV cars?

There's lots of unanswered questions at the moment.

But unless Foxconn can do something big to help with their growth the stock is likely going to be caught in limbo.

Ultimately this whole presentation is to get you to buy The Oxford Communique.

The point is to tease the stock, get you interested and then get you to buy the newsletter to get the stock.

Well you know the stock now so you don't have to buy based on that.

You can decide if it's right for you based on its merits.

Here's what you should know about The Oxford Communique:

1) How Much Does The Oxford Communique Cost?

This newsletter costs $49 per year if you get the cheapest subscription and can go as high as $129 for the most deluxe version.

There's not too much difference between the options. If you pay more you get more special reports.

This is known as a bait product.

Oxford Club has many more expensive products they want to sell you and need to get you into the sales funnel - hence the cheap price.

2) What Do You Get With This Newsletter?

This is a very standard newsletter offering and you get what you pretty much get in any other investing newsletter.

The main parts are:

Again nothing special about what's being offered.

Yes, I believe so.

We'll cover the red flags for this newsletter next but Alexander does recommend good stocks and he does get good customer reviews.

For example, this customer has been a member for 15 years which shows Green has done well:

Nobody is sticking around with an investing newsletter for 15 years if it's losing money.

4) Are There Any Red Flags?

Yes, there's a MAJOR red flag with The Oxford Communique.. it's owned by an awful company called Agora.

Agora is one of the biggest investing newsletter companies in the world and they make hundreds of millons per year.

They own several publishers and one of them is The Oxford Club.

Agora doesn't treat their customers well and are very predatory in the way they do business.

The goal is to get as much as possible from you and they often cross the line.

For example, they just had to pay millions in fines for defrauding the elderly:

You'd think something this embarrassing would cause a course correction but it hasn't.

The truth is Agora simply makes too much money donig this kind of stuff and $2 million isn't enough to deter them.

As Truth In Advertising proves they're still targeting seniors:

You can expect a lot of dirty tricks if you buy from Agora.

5) Do You Recommend The Oxford Communique?

I actually do because the customer reviews are good and I've looked at some stock picks in the past - they did well.

Plus the price is very affordable.

BUT don't fall for any of the upsells.

This is the best product that Oxford Club sells and the upsells are more likely to lose you money.

So don't be stupid and spend thousands after buying this newsletter.

I hope all your questions were answered.

You now know the stock Alex is pushing and you have information about whether it's a good investment.

The main thing to ask yourself about Foxconn is where is the growth going to come from?

They already are huge and have massive clients.

They'd have to do something big which is possible. They are moving into auto manufacturing.

But who knows at what capacity or anything like that.

Lastly, you know my thoughts about The Oxford Communique.

t's a good newsletter but owned but a lousy a company that's going to try and milk you for a lot of money.

I wouldn't blame you if you'd want to avoid doing business with a company like that.