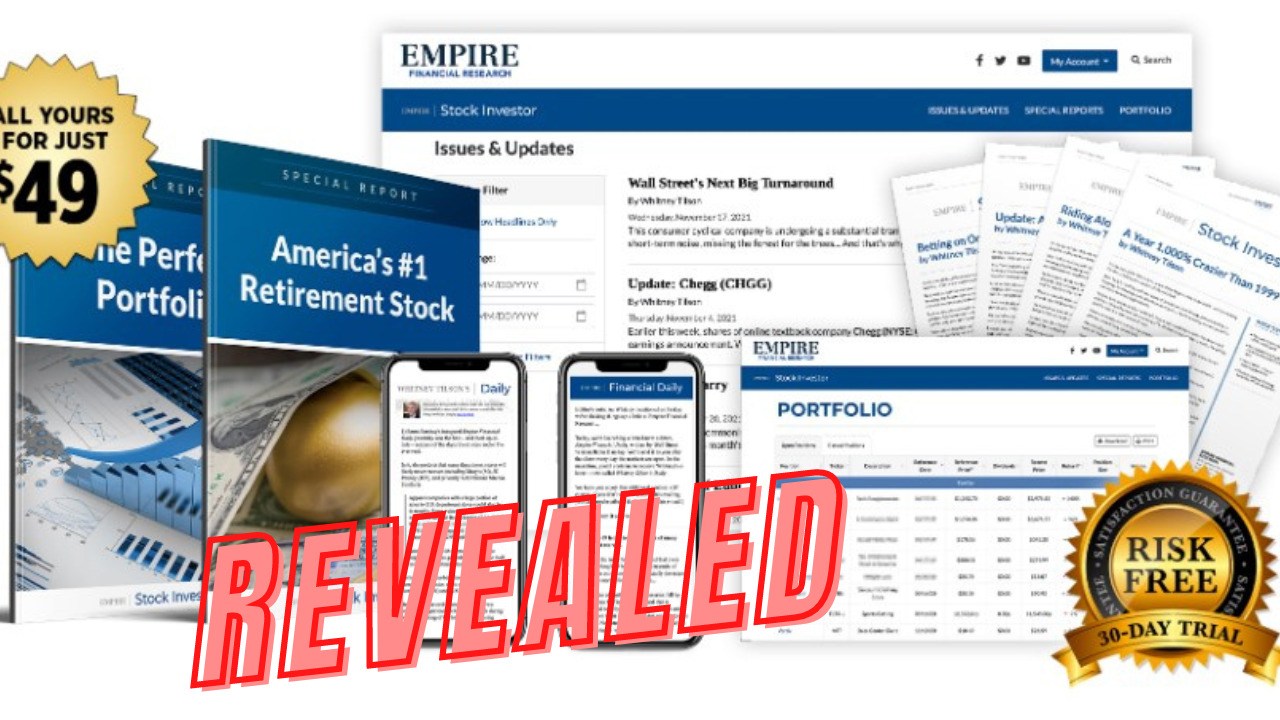 Just got an email from Whitney Tilson where he hypes up something he calls "The Perfect Portfolio."

In this portfolio is "America's #1 Retirement Stock" and three "Tech Titan" stocks.

Whitney goes as far to say he'd put "50% of his kid's college fund" into these stocks.

There's one problem, though.. Whitney won't tell you most of the stocks unless you buy his newsletter.

Well I have good news - I was able to figure out every company Whitney is teasing in this promotion.

Below you'll see every company Whitney claims are in "The Perfect Portfolio." 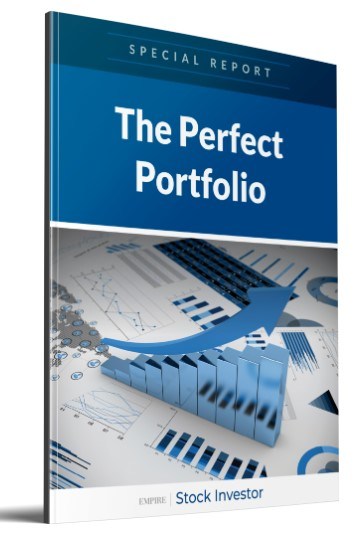 Whitney has been hyping up "The Perfect Portfolio" for years now and he's recommending some of the biggest companies in the world.

The perfect retirement stock is Berkshire Hathaway (class b shares) and is revealed in the presentation.

Whitney gives different reasons why each are good investments.

In the past Whitney also recommended Altria (Marlboro) but has dropped it in the latest presentations.

These are stocks you'll find in most people's portfolio's.

Figuring Out The Perfect Portfolio

I've covered Whitney Tilson many times on this website.

I reviewed his flagship newsletter called Empire Stock Investor a while ago and have revealed some of his stocks in the past.

For example, he teased a $4 inflation stock earlier this year that he claimed he put his wife's entire retirement fund into.

That stock is $2.80 currently so Whitney might be sleeping on the couch these days..

Whitney is now gambling his kid's college funds on a bunch of different stocks that he claims make up "The Perfect Portfolio."

Whitney starts the presentation by hyping up his connections and his past stock picking performances.

He uses this chart to show the success of his former hedge fund Kase Capital: 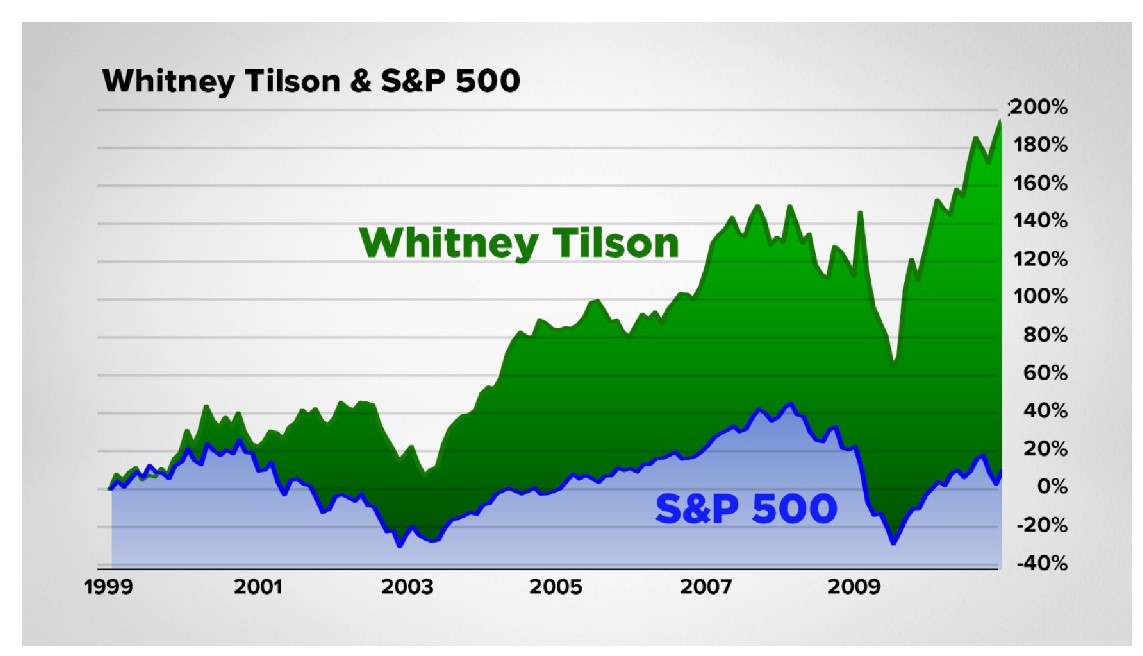 However, if you look at this chart you'll see it only goes up to 2009.

Whitney had a lot of success managing portfolios up until about 2011.

Since then he's been on a decade losing streak of not being able to beat the market.

He eventually shut down his hedge fund because of poor performance.

So while Whitney has had some success and does have impressive connections (his great grandfather was House Majority leader of Congress) he's had big failures as well.

It's never smart to follow any of these stock picking gurus without a lot of skepticism.

Rarely do they talk about their big loses.

Now that you know that, let's get back into the presentation.

I know this because Whitney gives this one away for free.

Berkshire is headed by world famous investor Warren Buffet and Berkshire Hathaway is currently the most expensive stock in the world: 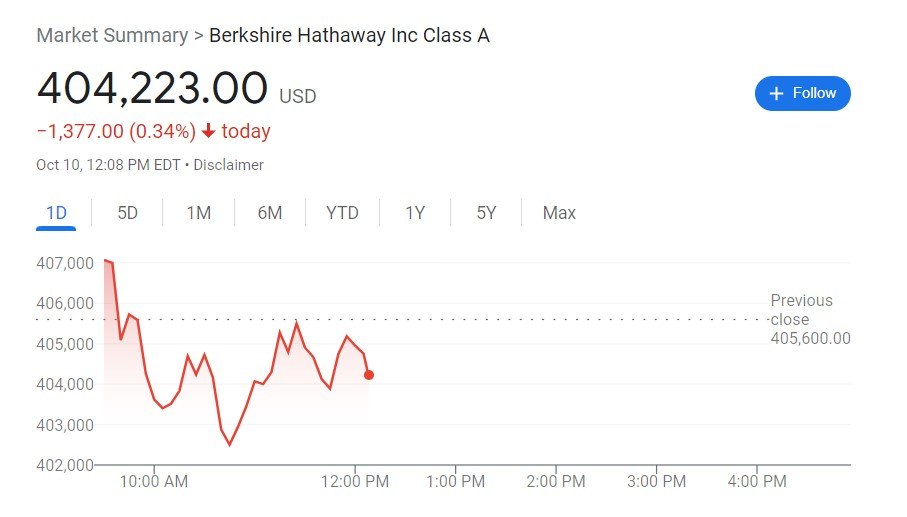 $400,000 is obviously too much for the average retail investor to put into a single share of a stock.

Instead Whitney is recommending buying Class B stocks of this company.

The Class B stock is only a couple hundred of dollars and is currently around $270 as of the day I'm writing this post.

The Class B stock was created in 1996 to give smaller investors an opportunity to buy into the company.

Next up we move on to the "Tech Titan" stocks.

The first Whitney claims could soon "revolutionize how Americans take care of their health."

Whitney drops another hint and claims it's "the largest carrier of delivery services in America."

This is the hint that gives away the stock.. and it's Amazon.

Here's an article from CNBC talking about Amazon becoming the largest delivery service in America.

Amazon is up since Whitney first started running this presentation back in December 2019: 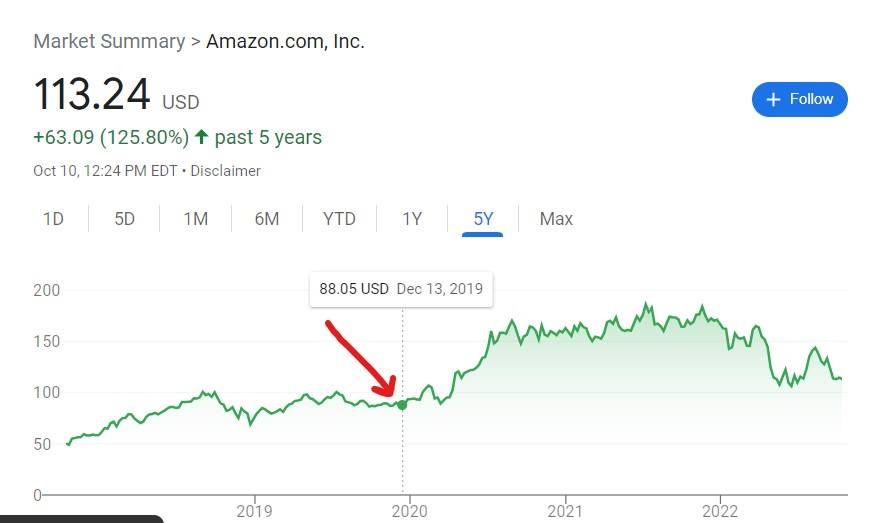 So far his kid's college fund seems to be doing well.

Next, we have "Tech Titan #2" and Whitney claims this company is "the company dominating the business behind AI."

Tilson claims AI is going to be a $15 trillion dollar business by 2030.

In this section of the presentation Whitney hints at an Economist article that claims this mystery company will "dominate artificial intelligence."

I found the article and the company is Alphabet (Google).

Here's how the stock has performed since being recommended by Whitney: 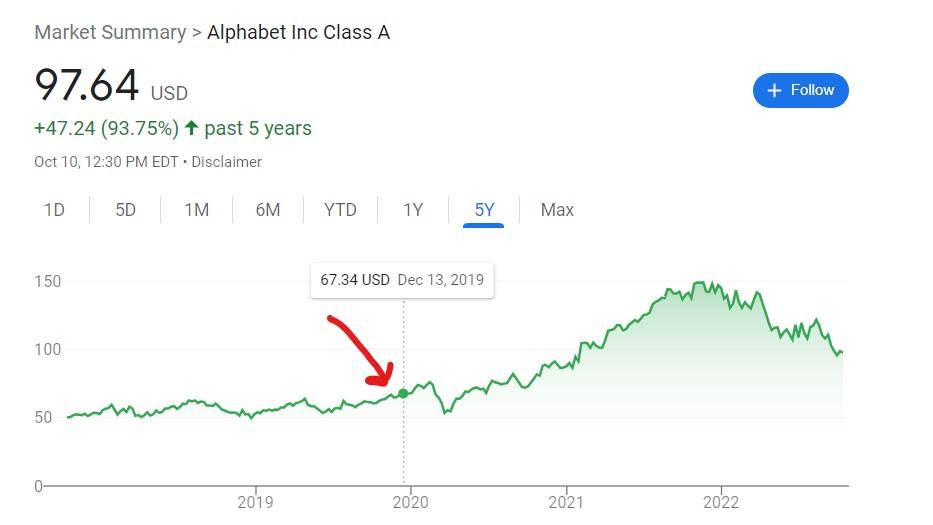 Now we have "Tech Titan #3" which Tilson claims is "the only augmented reality company on the path to a billion users."

This company is Facebook.. which goes by Meta now.

The augmented reality universe Whitney is hinting at is The Metaverse.

Here's how the stock has done since being recommended by Whitney: 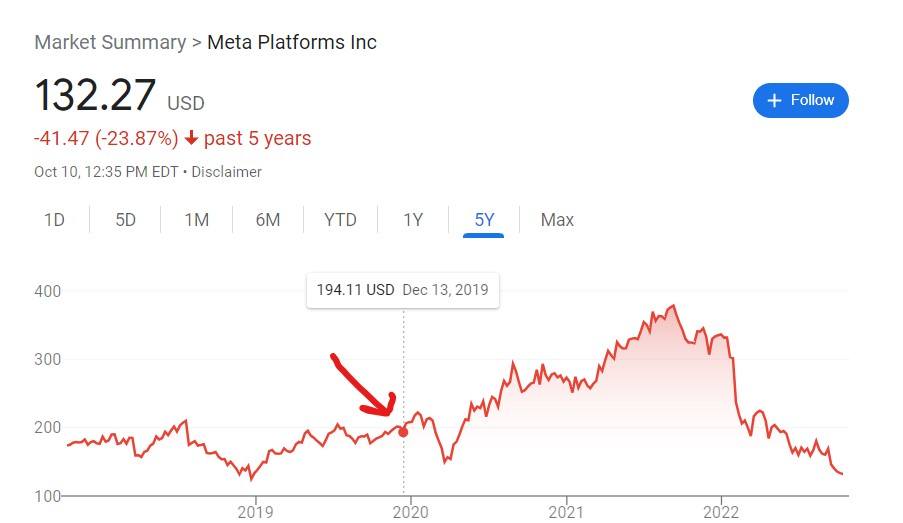 This stock was doing well for a little but started crashing once it was revealed The Metaverse doesn't really exist yet.

It'll probably rebound in the future.

Before we move on to the next section I want to cover another stock that used to be a part of this presentation - Altria.

Altria is a tobacco company and they own brands like Marlboro.

This stock used to be pitched as a "dividend machine" in this presentation.

Atria is one of the best performing stocks of all time but has not done well since being recommended by Whitney.

The stock is down and so is the dividend which is why I'm guessing Whitney dropped it from the presentation.

In the end Whitney is trying to pitch you on joining his newsletter.

Now that you know the stock picks you don't have to join to see them.

You might still be asking yourself if it's worth it.

Here's some answers to frequently asked questions to help you determine that:

1) How Much Is Empire Stock Investors?

After this initial year it renews for $199 per year.

The main reason stock pickers price their products this cheap is to get you into the sales funnel.

Whitney has products that costs thousands of dollars a year and he's going to heavily promote them to you once you're in the sales funnel.

So beware the expensive upsells.

2) What Is The Investing Strategy?

Mainly you'll be targeting well known, large cap American companies and holding them for 3 to 5 years.

You can expect to have a portfolio of up to two dozen stock picks.

3) What Are The Deluxe And Platinum Subscriptions?

There's an option to buy Empire Stock Investor at $79 and $129 for the first year.

Each come with extra bonuses.

Now you may be asking yourself how Whitney can offer a subscription from a person from a different publisher (Louis is over at Investorplace).

Well a much larger company called Marketwise actually owns both these publishers and about a dozen more popular ones.

Louis is a con artists and has been fined $30 million in the past for defrauding investors.

So I'd stay away from any product he runs.

The platinum subscriptions comes with a copy of Whitney's new book.

Neither of these upgrades seem appealing to me.

At one point he ran a very successful hedge fund and made his customers a lot of money.

But that was more than a decade ago.

He's been underperforming the S&P for years and even lost money some years.

There's really no proof he's turned things around with his new newsletter.

Last I checked his stock picks were still underperforming the market.

Overall I think Whitney is competent, though.

A lot of his stock picks are pretty standard and I think in the long run you'll make money with them.

5) Do You Recommend Empire Stock Investor?

They're all good stocks but let's be real here - everyone has these stocks in their portfolio.

Dealing with the sales funnel for this newsletter is annoying as well.

You'll be bombarded with promotions every single day and some of these promotions will cost thousands of dollars.

Others will tease products from legit criminals like Louis Navellier.

So as long as you just stick with Empire Stock Investor and not fall for the upsells I think it can be worth it.

But I don't blame you if you don't want to deal with all the extra stuff that goes along with a subscription.

Alright so that's the end of this post revealing Whitney Tilson's Perfect Portfolio.

There was originally 5 stocks in this presentation but the tobacco stock has been dropped (I'm assuming from poor performance and the dividend shrinking).

The 4 remaining stocks are very well known and stocks most people have in their portfolio.

Meta is the only stock that's struggling of the remaining recommendations and has lost quite a bit of value over the last year.

Berkshire, Alphabet and Amazon are still doing well and there's no reason to think they won't into the future.

Overall, these are definitely stocks you want in your portfolio.

Whitney has his positives and negatives.

He's been in the game for a long time but has been on a losing streak for a while.

His newsletter might be worth it if you can resist the upsells.

There's a lot of places to get good stock picks and many newsletters that perform better than Empire Stock Investor.