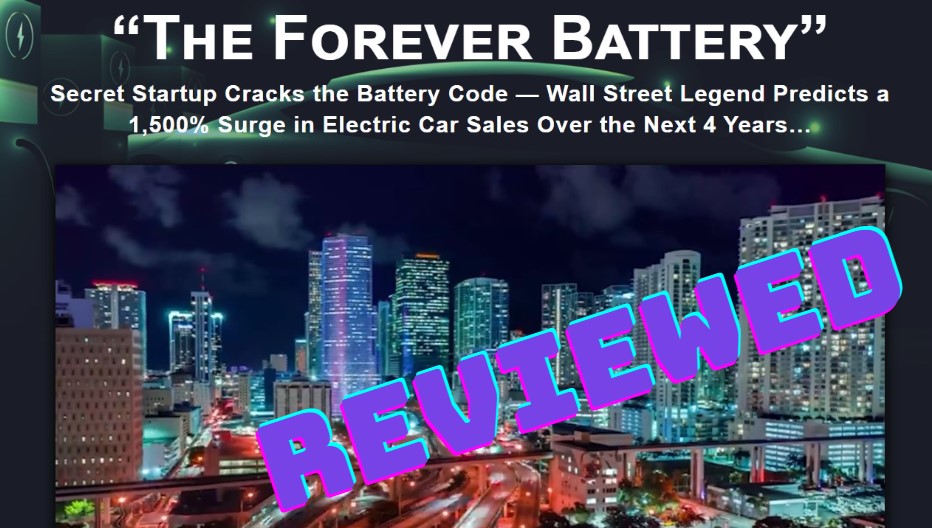 Chris Mizrahi is out with a stock presentation hyping up what he calls "The Forever Battery."

He claims a company is going to outperform all others in the EV space and create a battery that can last millions of miles.

There's one problem, though..

Chris won't give you the stock unless you buy his newsletter.

Well I have good news - he left enough clues in the presentation to figure out the stock.

I reveal it below along with additional information so you can determine if it's worth buying or not. 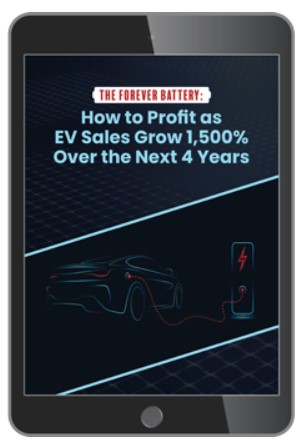 Quantumscape is a next generation battery company that absolutely exploded in popularity for investors back in 2020 and 2021.

However, the stock has cratered since then and is now at around $7 (Charles recommended in the $20's.)

Quantumscape is a research and development company and doesn't profit or even have a real product yet.

They spend a lot of money per year and aren't ever guaranteed to have a viable product.

So there's a lot of risk involved.

Bollore is a MASSIVE company that brings in over $20 billion in revenue every year.

They're involved in shipping, oil, manufacturing and batteries.

The idea is they're making battery storage products.

However, this will be just a small part of what they do. Overall this is a much safer investment.

The idea of a "forever battery" has been around for a couple years now.

Many stock pickers have been pitching this concept under different names (and most of the investments end up poorly).

Here's everything you need to know about this teaser.

EV cars seems to be the future.. whether it's the distant future or close future, that's the way the world is heading.

One of the big flaws in electric cars is how long they hold a charge and the amount of time it takes to charge.

If you wanted to charge a Tesla at home or at a standard electric charging station it will take around 8 to 10 hours.

Most electric car's range isn't too much... and only high end Tesla's get 300 miles or more on a single charge.

Superchargers help and can charge an electric car in 15 minutes.

There's plenty of them around on the costs but it would still be a pain if you ventured into middle America:

Here's a map of Superchargers: 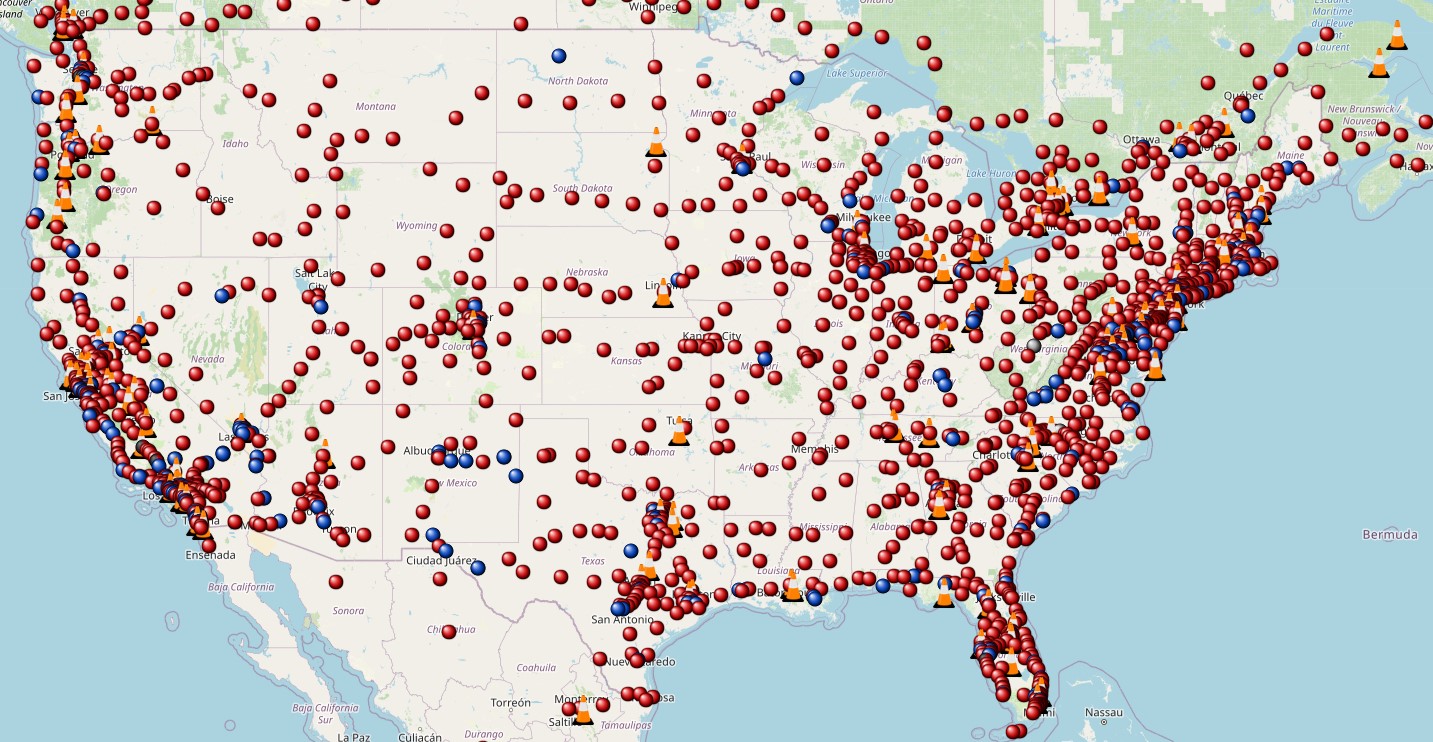 To remedy this issue many people have tried developing clean energy cars and alternatives to lithium ion batteries which most electric cars use.

A solid state battery uses "solid electrodes and solid electrolytes" and this helps them charge faster.

Apparently the high density assists in this.

Some supposed benefits of a solid state battery compared to a lithium ion battery includes:

You'd think a battery that lasts longer, charges quicker and is safer would already be used in cars.

However, there are some drawbacks to this technology.

So there's issues but every big technological leap has run into similar problems.

If solid state batteries truly are the better choice I'm sure the creators of these products will find a way.

QuantumScape Is The Main Stock

The company that Charles is alluding to that will create this forever battery is QuantumScape.

This company's stock went absolutely wild after going public through a SPAC deal in the summer of 2020.

Investors wanted in and were buying it up.

This caused the stock to jump over $110 and the valuation of the company to reach $50 BILLION.

All without actually selling a single product..

I guess the idea of a better electric battery really captured the minds of investors.

However, one hedge fund wasn't buying the hype.

I covered them before when they shorted Ginkgo Bioworks,

They claimed QuantumScape was just a grand pump and dump scheme and an EV fraud. 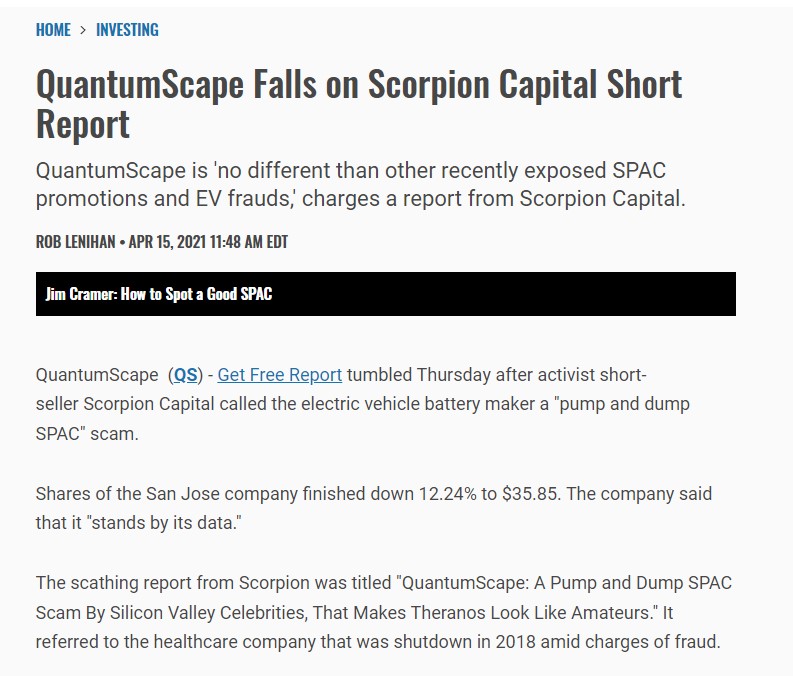 They shorted the stock when it was in the $30's and it's dipped as low as $5 since then.

Another victory for Scorpion Capital!

Charles recommended the stock at around $25 back in October of 2021: 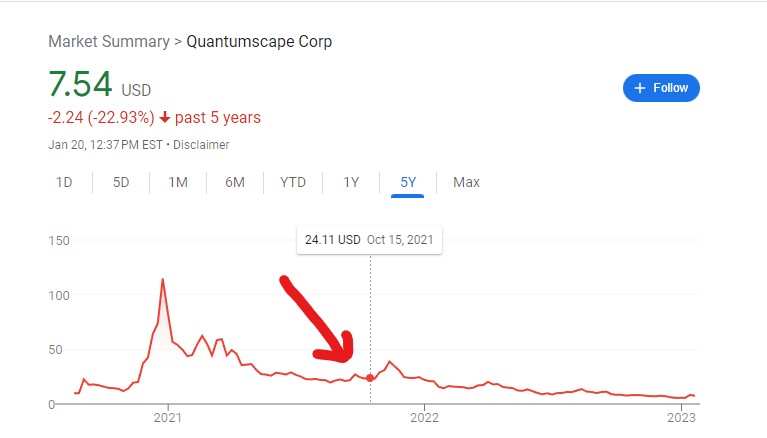 So anyone that has listened to Charles has taken a hit so far.

What To Dislike About QuantumScape

QuantumScape is a very risky stock to invest in.

First off, QuantumScape is a research and development company that doesn't actually have a product yet.

They recently started shipping out protypes but the CEO admits they're years away from a commercial product.

They're going to burn through cash until they can profit (which isn't guaranteed).

Some have estimated they'll be spending $300 million per year!

And like I mentioned before Scorpio Capital thinks the entire company is one giant fraud.

They released a 188 page report of their findings that you can read here.

Their summary about the company is pretty simple:

They believe the entire company is a pump and dump scheme and that the fraud will be coming to an end soon.

Which is why they believe the CEO is on TV constantly trying to pump the stock: 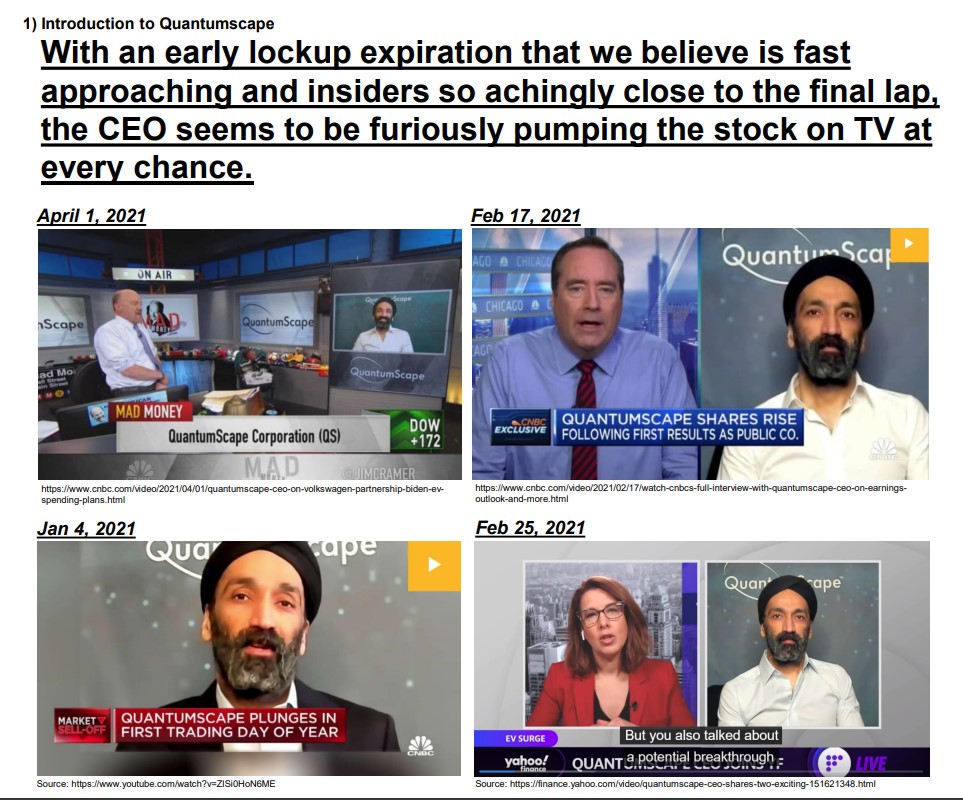 As part of their research Scorpio Capital interviewed ex-employees and the picture painted doesn't seem too good: 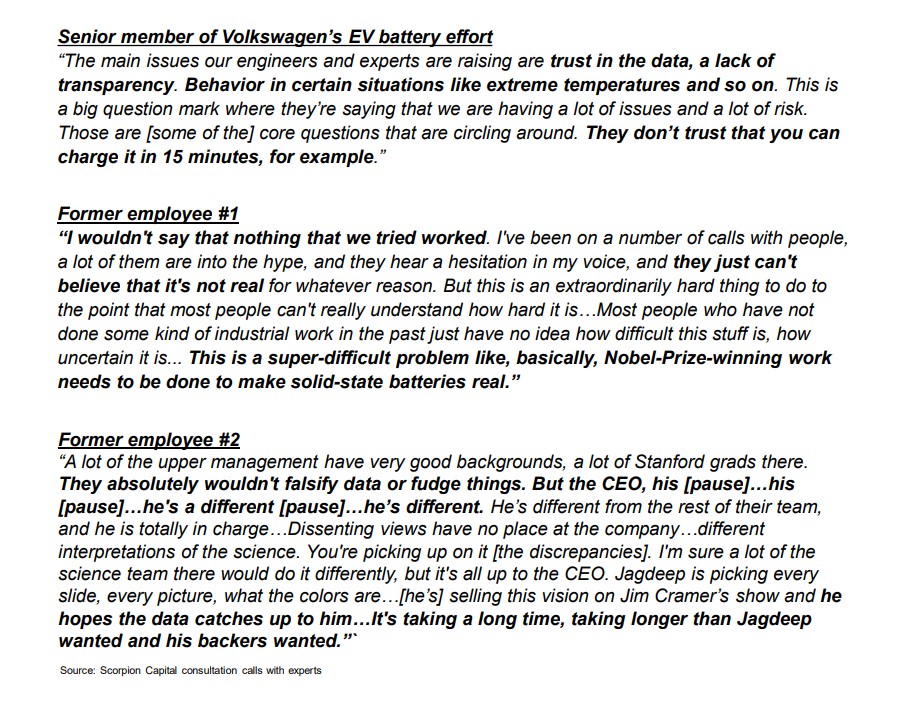 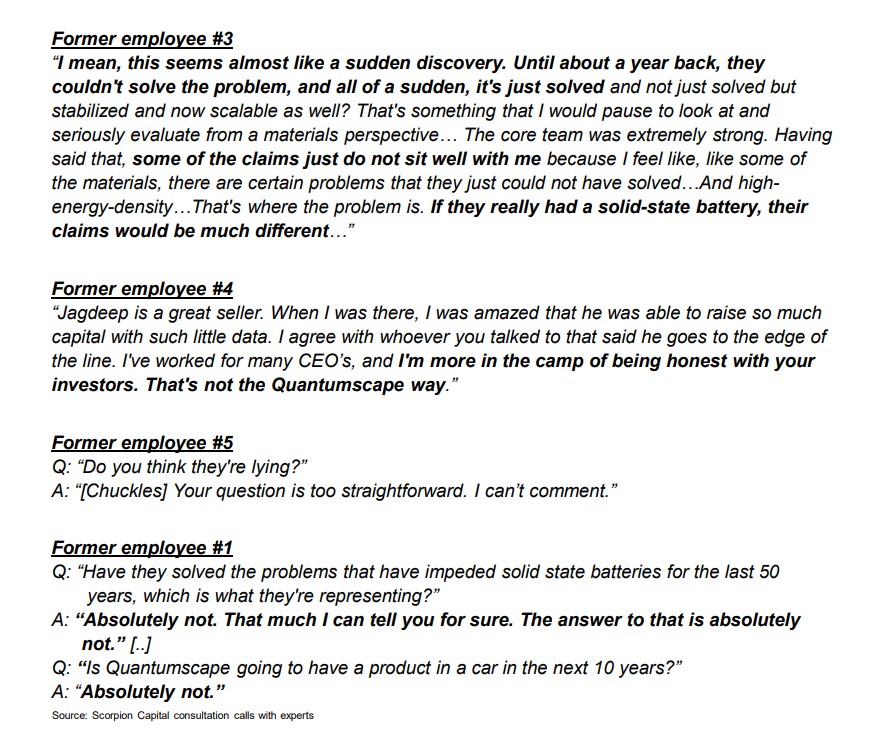 Ok so that's the bad of QuantumScape.

Is there anything good?

Well the first thing to like about QuantumScape is it's a hell of a lot cheaper now than it was when it first went public.

Now if this really is a pump and dump scheme the stock will eventually go down to $0 and the money you invested will likewise be $0.

But if QuantumScape truly is going to make a better car battery the investment will likely sky rocket.

So now would be a good time if you believe in this company.

Additionally, they hit one of their big goals recently and started shipping prototypes out to their customers: 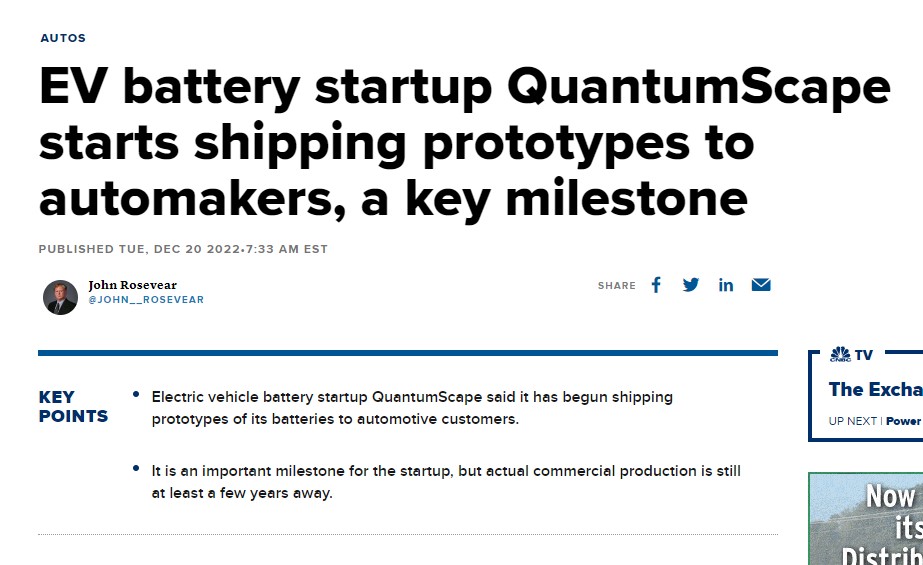 Another thing QuantumScape has going for it is they have a lot of cash.

They sold a ton of stock and has hundreds of millions in investments from Volkswagen.

When they went public through a SPAC merger with Kensington Capital Acquisition they receives $1 billion in financing.

So while they're burning through cash they do have a lot of cash to burn.

Is Investing In QuantumScape A Good Idea?

This is a question you ultimately have to answer for yourself.

Two years ago I would have told you to hold off and not invest.

Now the stock is much more reasonable at $7.

If you do invest just realize it's going to be many years before this company has a real product.

And that's not even guaranteed to happen.

There's been several of these companies before that have failed.

As Scorpio Capital pointed out all solid state battery companies that flopped in the past had institutional support of well known automakers:

So just understand despite the hype QuantumScape is anything but a sure thing.

It's a risk that likely has a lot of speedbumps in its future.

The Other Stock Is Bollore

Bollore is the other company being teased.

Charles believes they will be a major player in battery storage technolgoy.

Here's the thing about Bollore.. they are absolutely massive.

Their main business is on transportation and oil logistics.

They also own large states in Vivendi and Universal Music Group.

Battery and energy storage only makes up 2% of their overall revenue.

However, they're very profitable so they're a much safer bet compared to QuantumScape.

Is Alpha Investor Worth Buying?

In the end this "Forever Battery" stock presentation is meant to get you to buy Alpha Investor which is an investing newsletter headed by Charles Mizrahi.

Now you don't have to buy the newsletter to learn the "Forever Battery" stock.

You can buy it on its own merits.

So is this newsletter worth buying?

You get a monthly newsletter and model portfolio.

However, the results are nothing spectacular.

Most of the stocks that I've looked at recommended by Charles are down.

QuantumScape is down significantly since being recommended by Charles and has lost about 70%.

Other stocks are down 50% in the same time period.

It's a very cheap newsletter but acts as a bait product to get you into a sales funnel.

Once in the sales funnel you'll be recommended services that cost thousands of dollars and are very low quality.

I'd avoid signing up for Alpha Investor.

So that's the end of my write up for Charles Mizrahi's "forever battery" presentation.

In the end Charles is hyping up a solid state battery manufacturer called QuantumScape.

He's been recommending this company for over a year now and the results have been disastrous for anyone who's followed Charles' advice.

There's A LOT of questions about QuantumScape and there's too much risk for me to personally want to invest.

Who knows if they even develop a commercial product.

A well regarded hedge fund believes the entire thing is fraudulent and just a pump and dump scheme.

If you're looking for a trustworthy investing newsletter, click below for my favorite (it's very affordable):