If you're thinking about signing up for this crypto opportunity you should read this entire post so you can learn about this scam.

Despite being a newer company there's a lot of history and characters involved with Dagcoin and Success Factory.

In the end I'm sure you'll come to the conclusion that this company isn't for you. 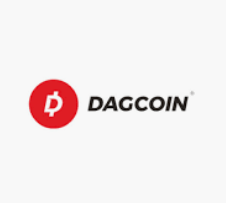 Summary: Dagcoin - Success Factory is a crypto ponzi scheme that has you invest real money for Dagcoin.

This company is a ponzi/pyramid scheme because recruitment is the only way you can make money and there are some seriously shady people running/promoting Dagcoin.

Many of these people were involved in an almost identical ponzi scheme that defrauded billions from people called Onecoin (you'll learn more about this company in this post).

In the end this company will collapse when recruitment slows down and most people will end up losing money here.

Stay away at all costs.

1) What is Dagcoin? Dagcoin is a cryptocurrency that is also a Multi-Level Marketing level opportunity.

The company started in 2017 and was founded by Nils Grossberg. Dagcoin is based out of Estonia.

Success Factory is an "education" company that's also a MLM. This company, however, is nothing more than a front to get people to invest in Dagcoin.

2) How do you make money here? There's two ways to make money here - the first is to invest money into Dagcoin and then get returns and the second is to recruit people into the scheme.

3) Are there any red flags? The entire company is a red flag. The biggest red flag is this company is a clone of a very well known scam called Onecoin.

In fact, the owner of Dagcoin was a promoter of Onecoin and so are many other of the people involved here.

Additionally, Dagcoin is worthless and can only really be used internally (it has no real world value).

You're basically investing real money for something that's fake.

Add the fact this is a ponzi and will 100% collapse and you eventually have most people losing money here.

I'll go over each of these points more in this post.

4) Are there any similar companies? Unfortunately there's many crypto MLM scams out there including Gominer, Cloud Token, Payasian and more.

Dagcoin Is A Pyramid Scheme/Ponzi Scheme

Dagcoin doesn't really have anything to offer besides the investment in Dagcoin.

This means this company is a pyramid scheme and ponzi scheme which looks like the following:

The above happens when recruitment is the only way to make money which is the case with Dagcoin.

You don't earn money by selling a product but only earn money when you bring new people into the scheme.

Then you make money off the people your recruit's recruit and so on. There's no way to make money without recruiting.

Even the services of Success Factory are all designed to get people invest in Dagcoin.

This company is also a ponzi scheme because the only source of revenue is new investment.

When you recruit someone into the scheme that money is used to payout people looking to withdraw their money.

The problem here is recruitment can't go on forever and once it slows down there won't be enough to pay everyone out.

This Is A Onecoin Clone 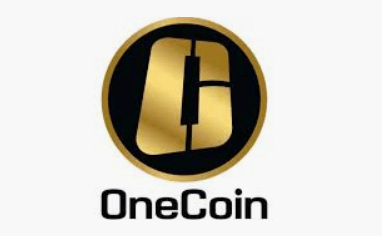 About five years ago Onecoin launched and it's basically the same company as Dagcoin (the owner of Dagcoin promoted Onecoin).

Oncoin is one of the most infamous crypto scams ever launched and in the end just ended up being a 4 billion dollar ponzi scheme.

Currently the owners of this scheme are facing 90 years in jail and investigations of Onecoin have popped up in Sweden, Finland, Austria, Thailand and more.

In total 98 people have been arrested with connections to Onecoin and many other top people have disappeared off the face of the earth. One of the main people at Onecoin, Ruja Ignatova, has gone off the grid and no one has seen her in nearly 3 years!

The reason I'm mentioning this is Onecoin was exactly the same as Dagcoin.

You invested money into a make believe crypto and you earned commissions off the investments of your recruits and downline.

At one point Igor and wife lament the difficulties they faced in the last months as Onecoin imploded around them.

Remember Onecoin scammed $4 billion from people and Igor was making $2 million A MONTH from Onecoin and has made over $100,000,000 in his MLM career.

I'm sure it's been a difficult time for him..

Igor has even gone on to trash Onecoin shorty after this video.

The problem is he's trashing Onecoin AS HE PROMOTES DAGCOIN.

It's the exact same company. You absolutely can't take his apology seriously when he's promoting a clone of Onecoin that's being run be a promoter of Onecoin.

You'd have to be a fool to trust anything that comes out of Igor Albert's mouth and Dagcoin in general.

I think it goes without saying that most people that invest in Dagcoin will end up losing money.

Maybe in the beginning you'll be able to make a little money but there's a stipulation you have to reinvest 35% of Dagcoin back into the company for at least 8 months.

The reason for this is there's not enough to pay everyone out and they can't have everyone withdraw at the same time.

So basically when you invest money, that money is given to people trying to withdraw who invested months before.

So in order to make money here you'd have to outlive these 8 month waiting periods and actually be able to withdraw money before the scheme collapses (which it definitely will and could at any moment).

So investment is not how you're going to make money here.

The real way to make money is recruitment which is how Igor Alberts is making millions a month.

The problem here is you won't have the network or recruiting opportunities Igor has and this will ultimately lead to disaster.

Imagine recruiting friends and family into Dagcoin just to have it collapse and everyone lose their money.

As you can see basically all MLM's are not worth joining and this goes double for Dagcoin.

How Much To Join Dagcoin?

To join Dagcoin you have to invest a certain amount into Dagcoin.

Here's the various levels you can invest:

You receive a certain amount of Dagcoin for your investment and then get returns weekly (paid in Dagcoin and 35% of which has to be reinvested back into Dagcoin).

Additionally you get rewarded for recruiting and earn a commission when someone in your downline invests money.

Here's a breakdown of the plan:

At Dagcoin there's various affiliate levels you can reach and you go from one rank to another by generating investment from your downline.

Here's the various ranks you can reach:

The more investment that comes from your downline the higher the rank you get.

When you go from one rank to another you get a reward as well. For instance, if you reach the last rank you get real estate or $100k towards real estate.

The higher the rank you go the more you get for bonuses.

When you initially invest into Dagcoin you can't do anything with your Dagocin for 8 months.

During these 8 months you get 3% weekly return on your Dagcoin.

After the 8 month is over you get 50% of the Dagcoin back and 50% is held again for 8 months and earns returns.

Everything is paid out in (worthless) Dagcoin.

Personal commission is the money you earn from the people you directly recruit. You earn 10% on all investment paid by your personal recruits.

Residual commissions is the money you earn from your downline. It looks like the following: 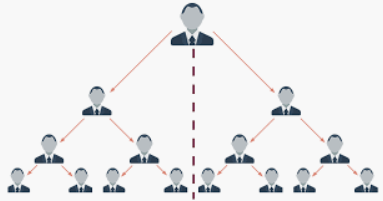 You earn a certain percentage from all the investment of the people below you.

A matching bonus is the commissions you earn from the bonuses your downline receives.

How much you earn and from what level depends on how much you invested in the beginning.

The more you invested in the beginning the larger the percentage you earn and the further down the pyramid you earn from.

You have to invest a minimum of $2500 to qualify for a matching bonus and this is paid out in a unilevel compensation plan which looks like the following: 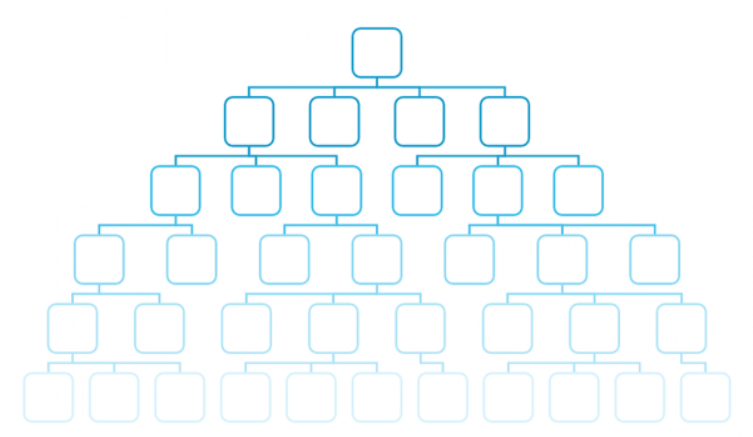 Too many connections to Onecoin

Onecoin is one of the most infamous ponzi schemes in the last 20 years and in total it's estimated they scammed 4 billion from people.

Dagcoin's company is almost an exact copy of Onecoin. They're both crypto opportunities where you invest money and get a worthless crypto in exchange.

Some cryptos have value because they're publicly traded and are accepted in a lot of places - Bitcoin would be an example of this.

It's price is determined by the market with Bitcoin and plenty of places accept Bitcoin as payment.

Dagcoin's price is arbitrary because it's not publicly traded. So they can say it's worth $1 but there's nothing to make that true.

If Dagcoin ever did go public it would be worth next to nothing because it's not accepted anywhere important.

The only way to make money here is to recruit and the only revenue here is from new investment.

This makes it a pyramid scheme and a ponzi scheme.

The problem here is this means this scheme is 100% guaranteed to fail and will eventually collapse. When this happens everyone loses their money with only the top guys walking away with millions.

There's a chance you even get in trouble for promoting Dagcoin because of this.

Is Dagcoin A Scam?

This company is basically a carbon copy of a ponzi scheme that collapsed and landed nearly a 100 people in jail as well as top people disappearing off the face of the earth.

There's many of the same people involved here too.

At the end of the day just ask where Dagcoin's value comes from?

But you are exchanging real money that can buy those things for it.

If you invest in Dagcoin you're basically just handing your money over to multimillionaire scammers who should most likely be in jail (and just might end up there).

You'll be happy you did when the scheme collapses and owners start going into hiding.

Hopefully you see Dagcoin for the scam that it is.