Is NeoLife A Scam? One Of The Oldest MLM’s Reviewed 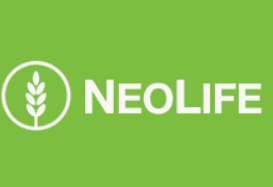 Neolife, formerly known as Golden Neolife Diamite International (GNLD), is a MLM that's 75 years old and is one of the longest running MLM's in existence.

But you may be wondering if this company is a scam if you've been approached to join.

Below you'll find everything you need to know about Neolife including background information, price to join, compensation plan breakdown, product overview and more.

By the time you're done reading you'll know if NeoLife is right for you. 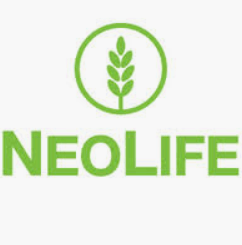 Summary: Although NeoLife has a lot of quality products and clearly have cracked some sort of MLM secret code to exist for 75 years, I don't recommend that you join this company.

There's many reasons for this and the main ones are an extremely low success rate (most people will lose money here) and there's pay to play here (the more you pay when you sign up, the more access to the compensation plan you get).

Also, there's autoshipment requirements that will cost you hundreds a month and could get NeoLife in trouble one day with the FTC.

1) What is NeoLife? NeoLife is a Multi-Level Marketing company that exists in the nutrition market. This company is 75 years old and was founded by Jerry Brassfield after he found a lot of success in direct selling.

The company was called Golden Neolife Diamite International and was rebranded to  Neolife in 2013 (a lot of people still call it by its old name).

2) How do you make money here? Like I said this is a MLM which means you sign up for a fee to be able to sell NeoLife's products for a commission.

Also, you get paid for recruiting and building your downline. There's also bonuses for various sales activities.

3) Are there any red flags? There's actually not much in NeoLife's history that raises any red flags. However, there's issues with the compensation plan that could lead to problems down the road (mainly autoshipment).

4) Are there any similar products? There are literally hundreds of health MLM's out there and some popular ones are Amare Global, Truvision Health, Morinda and much more.

Is NeoLife A Pyramid Scheme?

Pyramid schemes are illegal in basically all countries in the world. The reason for this is basically no one makes money except the people who get in early and they're extremely volatile (most collapse shorty after launching).

NeoLife has been around for 75 years and it would be hard for a pyramid scheme to exist this long.

So that means NeoLife is good, right? Not exactly.

Below is what a typical pyramid scheme looks like:

The above happens when recruiting is the only way to make money because the product offered by a company is a scam or non-existent.

NeoLife has legitimate products and you can make money selling them without recruitment.

But there are such things as product based pyramid schemes. This happens when the majority of a company's revenue comes from their own distributors buying products.

NeoLife made changes to their compensation plan in the last couple of years that really push autoshipment on their distributors.

Autoshipment is when distributors are basically forced to buy products every month for hundreds of dollars.

This is a grey zone and could eventually get NeoLife in trouble with regulators.

Do you know why so many people hate MLM's in general? Because most people that join one end up losing money (plus there's an unlimited amount of scams out there that masquerade as MLM's). 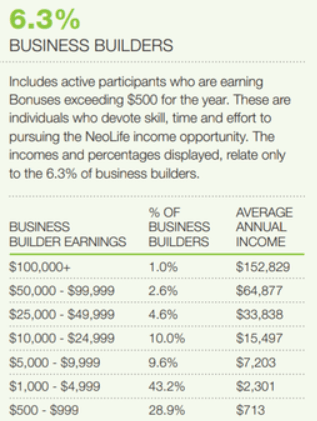 If you count everyone (including the people who lose money) it would probably be 99% make less than $2301 for the year.

Below is some even more eye opening MLM stats

As you can see you'll want to avoid all MLM's and not just NeoLife.

NeoLife Can Be Expensive To Join

Technically there's only one cost to joining Neolife and that's a $49 affiliate fee when you sign up.

But there's much more to joining MLM's than that.

If you want full access to the compensation plan you have to buy a pricey starter kit. Here's the different packs and their price:

The more you pay, the more you can make. This is known as pay to play and I really, really don't like this. Keep in mind most people lose money with a MLM so it's rotten to dangle higher commissions in front of a naive person's face.

This just leads to people losing more money than they originally would have.

There's another cost you'll have to factor in and that's autoshipment (which is even worse than pay to play).

This basically requires distributors to buy products every month to be commission eligible and this will cost $100+ every month.

There's ways to get around this but by NeoLife's own admission personal autoshipment is the best way to satisfy this requirement to be commission eligible.

In a year it's possible you could almost sink $3000 into this business.

MLM compensation plans are usually very complicated and this is the case with NeoLife. If you want to watch a full presentation on every detail of this plan, watch the video below:

I don't think it's important to know every single detail and I'm going to summarize the main parts for you:

Most MLM's come with affiliate ranks and at Neolife there's sixteen different ranks you can acheive.You move from one rank to another by hitting certain goals (meaning recruiting and downline sales goals).

You also get rewards for going up in rank as well.

Here's the ranks you can achieve at NeoLife:

To reach the last rank you'd have to recruit and maintain eighteen Director level recruits and generate 500,000 GV a month.

This is almost impossible and most people don't get past the first couple of ranks.

Retail commissions are commissions you make selling directly to customers. How much you make depends on your GV (Group Volume - amount of products being sold by your downline).

The more GV your downline sells the higher the commissions you get.

Here's the commissions you get based on GV:

Residual commissions is the money you make off the sales of your downline. At Neolife this is done in a unilevel structure and looks like the following:

How much you make again depends on GV. Here's what you can earn from your downline based on GV:

Most of the money to be made here is with retail sales and residual commissions. There's smaller bonuses as well and they are:

If you want to know what each of these bonuses are, check the video up top. 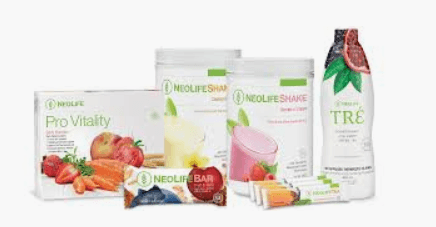 The best part about Neolife is they have a HUGE selection of quality products that people tend to like.

Some categories they offer products in are:

A big problem with MLM's is a lot only have one or two main products and this limits how many people you can sell to.

That's not the case here. You can literally find a product for basically every health issue here including just general health products.

The only thing is you can't see the prices of the products online which is pretty suspicious from me.

I've reviewed hundreds of MLM's and a lot of health MLM's. Almost in every instance the products are extremely expensive and cost up to 4 times as much as competitors.

This makes selling very difficult and will hurt your ability to make retail sales. My guess is this is what's happening at NeoLife (they'd have the prices if they weren't very expensive.

I don't think you should join NeoLife but there's somethings I like including:

At the end of the day there's more not to like here than to like and the main things I dislike are:

Is NeoLife A Scam?

At the end of the day I think NeoLife operates in the grey area of being a scam. On one hand it's been around for 75 years and this is really unheard of in the MLM world.

On the other hand they've made some changes in the last decade and the changes haven't been for the better.

Autoshipment and pay to play are bad practices which means NeoLife is doing it on purpose. There's no way they're naive to how bad these two things are.

So even if NeoLife isn't an outright scam it's 100% a bad business opportunity.

The success rate is very low and most people will end up making less than they invest.

If you've come to the conclusion NeoLife isn't right for you, don't worry - there's a lot of ways to make money online and from home.