He claims he can help you make money by investing in "socially responsible" companies.

Is he telling the truth or is this one big scam?

We'll get to the bottom of this question in this review and we'll investigate any red flags that I find.

There are red flags you should know about..

By the time you're done reading this post you'll know if Green Chip Stocks is worth it. 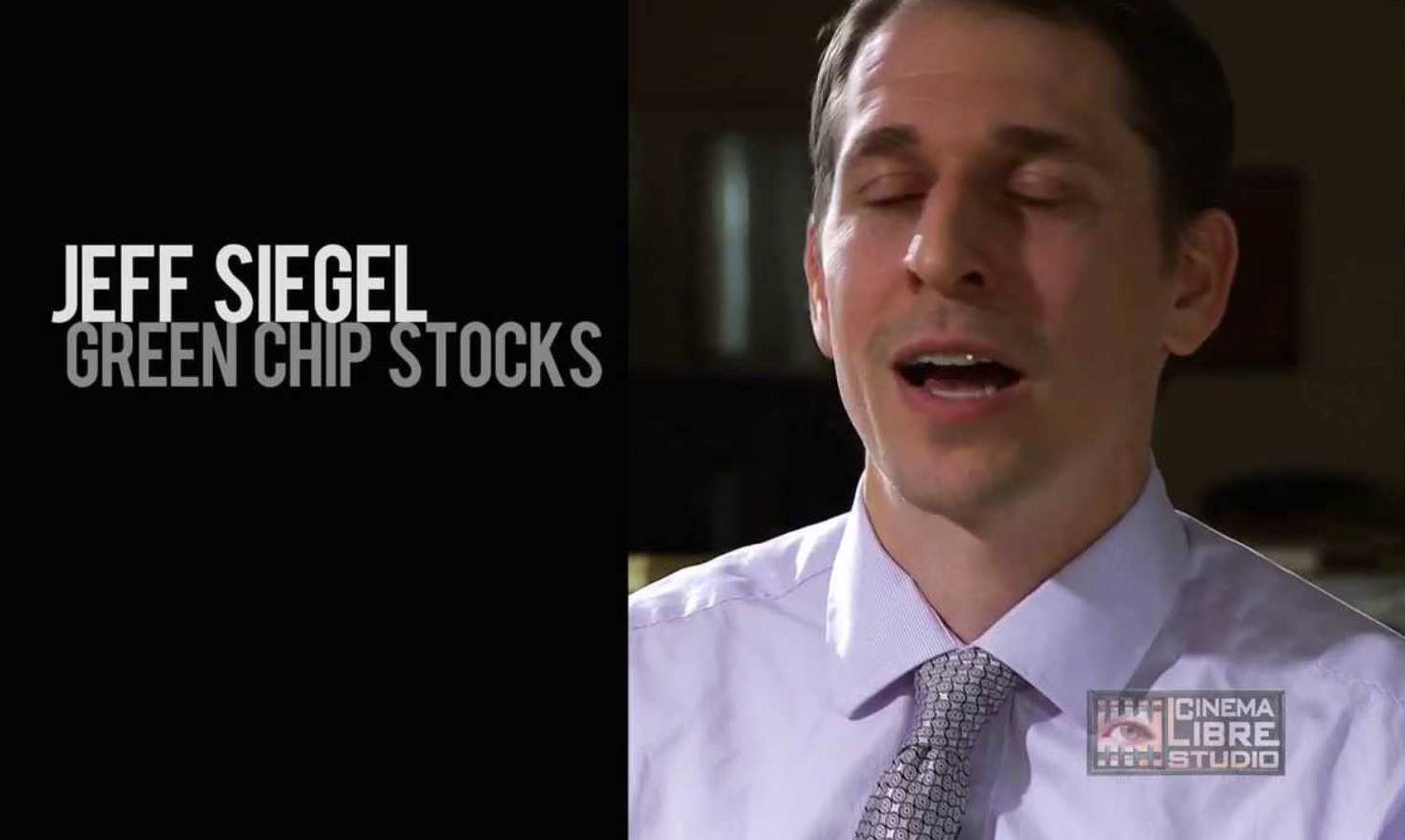 Green Chip Stocks doesn't have much going for it.

It's owned by an unethical company and some of the stock picks are absolutely horrible.

To top it off there's no refunds - I'd avoid this newsletter.

Owned By A Horrible Country

There's a really big red flag with Green Chip Stocks and that's who owns them.

The publisher for this investing service is Angel Publishing and they're owned by a massive company called Agora.

Agora makes over $500 million a year and owns many publishers that sell investing products.

It's a pretty big mistake to buy anything from Agora..

People who target vulnerable people with scams are scum in my opinion.

One of the most vulnerable groups is elderly people and Agora is known for promoting fraudulent products to this group.

Just last year they had to pay two million dollars for doing so:

Agora sold both health and financial scams to senior citizens.

The problem is two million isn't much to a company making hundreds of millions.

It's just the cost of doing business to pay these fines.

As Truth In Advertising has proven they're still targeting elderly people with deceptive marketing campaigns:

If you buy Green Chip Stocks this is who you're giving your money to.

I personally wouldn't feel comfortable with people like this having my credit card details.

Do you think Agora makes $500 million per year selling $249 subscriptions?

The answer is no.

The real money is in upsells and Agora knows this.

Once you buy any product from Agora you're thrown into an aggressive marketing funnel and will be promoted to multiple times per day.

Many of these products cost thousands of dollars and Agora has proven they'll try any trick in the book to get to you spend money.

Some of the people they call experts are in fact life long scam artists.

For example, Andrew Keene is promoted as a once in a generation investor.

In the past they've employed a guy named Teeka Tiwari of Palm Beach Research Group.

They promote him as "the most trusted crypto expert."

In reality he's banned from working on Wall Street for his unethical behavior.

Again, the last place you want to be in is an Agora sales funnel.

The resume (or should I say supposed resume - a lot of stock pickers mislead about their past) of a stock picker isn't that important.

The most important thing is if they can pick stocks that perform well.

These are supposed to be his best and most well researched picks.

Let's take a look at how they've performed over the years to get a sense of his ability to pick stocks.

SolarWindow For Over A Decade

SolarWindow is a company that Jeff has been promoting for over a decade now.

This company sells a thin solar film that will replace windows and works as solar panels.

The stock has been very volatile since Jeff has been recommending it: 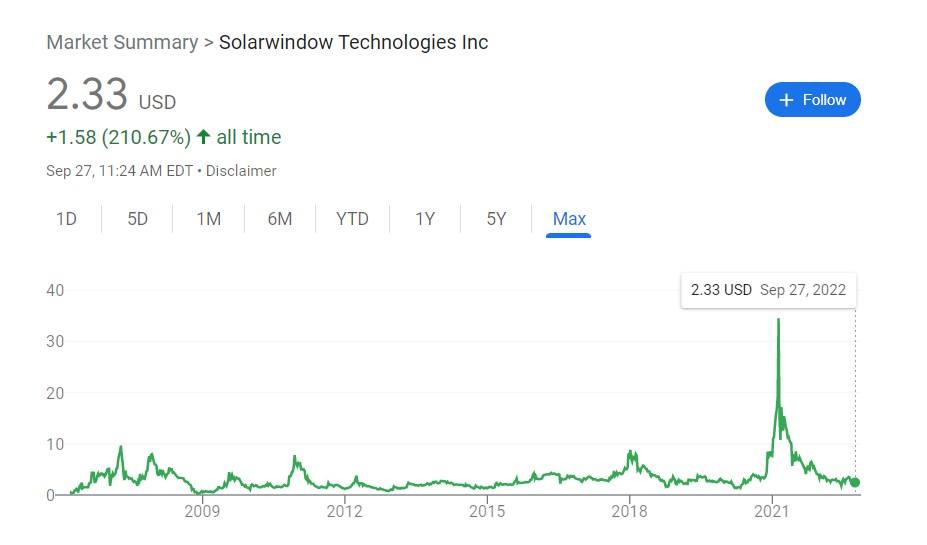 Currently there's a lot of uncertainty about the company because the CEO was fired by the board and shareholders are currently suing.

They've also made promises in the past that they haven't been able to back up.

This is the kind of stock that you just ride the waves.

I guess now wouldn't be the worst time to buy because it's cheap.

If you do buy just hold onto it and sell it when it hits one of its peaks.

Unity Biotechnology is a company that Jeff teased and claimed back in November that this company would make "an announcement on December 9, 2021 that will create a new world."

Did I mention Agora likes to overhype with their marketing?

Unity Biotechnology makes medicines for older people and is a stock many other stock pickers have hyped in the past.

Here's how it's performed since being recommended by Jeff:

The stock has performed really badly and has lost around 80% of its value in less than a year.

Doesn't get much worst than that.

MindMed And Captiva Verde In June 2020

Back in June 2020 Jeff released a stock presentation teasing something called "Molecule 520" and a couple companies that have the opportunity for 70,000% gains.

Did I mentioned Agora likes to overhype with their marketing?

The two companies hinted at were MindMed and Captiva Verde.

Apparently these companies make hallucinogenic drugs that can help with depression, addiction, PTSD and other mental issues.

Here's how MindMed has performed since being recommended:

This stock has performed extremely well for a while.

It was recommended at around $5 and got all the way up to $60 in a short period.

Anyone that sold at the peak made a lot of money.

If you held past the peak you're at break even.

Here's how Captiva Verde has performed:

This stock has pretty much lost all of its value.

So this one is a BIG loser.

resTORbio is a company Jeff teased in October 2019.

In the teaser presentation he claimed this company "will end aging and make you rich."

Additionally, he claimed the day they released their earnings would be "the most profitable day in the history of mankind."

Did I mention Agora likes to overhype with their marketing? (Yes I know this is the third time I've said this).

The day Jeff claimed would be the most profitable day was November 13th, 2019.

Do you know what happened to the stock on that date?

It completely tanked and lost almost all of its value.

This is now the third stock that we've looked at from Jeff that has almost completely collapsed after being recommended.

Natcore is another solar panel company that Jeff teased years ago.

He teased this company claiming Warren Buffet was an investor and that this company would provide endless energy to people.

Did I mentioned that Agora.. ahh forget it..

Unfortunately for people that follow Jeff this stock has collapsed and lost 100% of its value:

This is now the fourth stock that has lost more than 80% of its value since being recommended.

What Does Green Chip Stocks Offer?

Green Chip Stocks is a very standard investing newsletter and offers the same thing that other Agora publishers offer.

Here's an overview of what they're offering:

This is the main part of the offer and essentially what you're paying for.

You get the Green Chip Stocks newsletter periodically through the year.

In each newsletter you can expect to find investment ideas, portfolio updates and market news.

These come more often than the newsletter.

The updates just give you information and news on the open positions in the Green Chip Stocks portfolio.

You'll get advice on whether to buy, sell or hold stocks in these updates as well.

You'll also get a membership to the Green Chip Stocks website.

Jeff posts every day there and you'll get updates on the positions daily here.

Still have some questions about this newsletter?

Here's answers to any remaining questions you might have:

1) How Much Does Green Chip Stocks Cost?

The cost of this newsletter is $249 per year.

This is actually a little pricier than most introductory investing newsletters.

I couldn't find any promotions for this newsletter either.

Keep mind if you buy the upsells they get very expensive - some will cost tens of thousands per year.

I actually find this a little weird because almost all introductory newsletters from Agora come with a refund policy.

They typically don't have refund policies for their more expensive products.

But on the Green Chip Stocks sales page you'll see it clearly states there's no refunds.

Jeff is an Agora lifer.

Most people have some sort of investing background before joining an Agora publisher but that doesn't seem to be the case for Jeff.

He joined the company back in 1994 which is way earlier than I've seen from anyone else.

Jeff isn't the oldest looking guy either so I can't imagine he had much of a career before joining.

This is a big red flag in my opinion and really limits just how legit Jeff can be.

Working at Agora for 30 years has to corrupt you.

4) What Is The Investing Strategy?

Jeff's strategy for this newsletter is to focus on energy stocks - mainly those in renewable sectors.

More and more money is being spent on renewables so it seems like a good investment for the long run.

But be careful not to invest in companies that aren't proven which unfortunately Jeff does.

That's why so many of his picks crash.

So look beyond what a company is promising and beyond just the story they're pushing.

You have to look at margins, revenue, operating costs and more.

5) Are There Similar Newsletters?

Oh yeah.. here's some similar newsletters that I recently reviewed:

And more. Most of these newsletters are owned by Agora.

I can usually point to some sort of positive for an investing service (unless it has to do with day trading).

But there's nothing to really like about Green Chip Stocks.

It's more expensive than similar newsletters and there's no refund policy.

The stock picks are extremely risky and volatile - many have lost 100% of their value after being recommended.

Many of these picks crash after being promised absurd returns.

Jeff has been with Agora for 30 years too and that's not a good thing.

Just overall a low quality newsletter that could potentially lose you A LOT of money.

I'd pass on Green Chip Stocks.. the picks are way too risky.

The good news is there's plenty of investing newsletters that can help you make money.

My favorite newsletter is very affordable and has made me a lot of money.